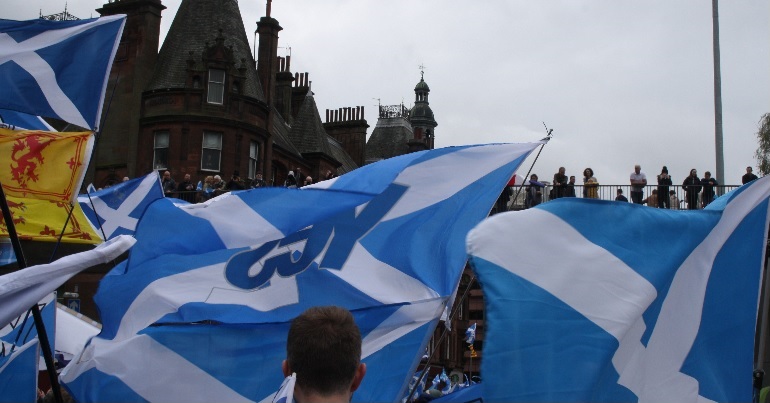 May 2022 will see voters in Scotland elect all 32 local authorities. The SNP is hoping for a repeat of last May’s success at the national elections, where it solidified its position in government and its voting base among the working class. Meanwhile the predicted Green surge was more of a slight ripple. And Alba’s “max the Yes” strategy fizzled on the launchpad, while Scottish Labour continued to lose seats and ground.

The left has struggled to make any ground in Scotland since the 2019 general election. Polling still has Labour neck-and-neck with the Tories, and the SNP retains firm control of Holyrood after 15 years in power. As the only socialist party at Holyrood, if Scottish Labour fails to win the support of the working class then socialist representatives in parliament and local authorities will become rarer and rarer. The decline of socialism in Scotland will continue. And if the SNP considers victory in these council elections as widespread support for independence, the push for a second independence referendum will gain traction. Other options, such as further devolution or a federal model, will be ignored.

Leftists in Scotland and across Britain need to wake up to how dangerous this is. When the SNP dominates the debate, by prioritising nationalism above all other policies, the left’s electoral prospects and working class communities suffer. Scottish Labour cannot effect socialist policies like a just climate transition or publicly-owned public transport if its insistence on unionism bars it from government. So the left needs to set out a coherent, radical, and electable alternative to a second independence referendum. Through a constitutional convention, leftists could formulate an alternative which will have popular support.

Devolution and the constitutional question

Support for Scottish independence has been building amongst working class voters since the 2014 referendum. This is evidenced by multiple reports, including those showing that around one in three Scottish Labour voters and over half of Scottish Labour members support a second independence referendum. SNP MPs and MSPs now represent historical Labour seats despite SNP parliamentarians mostly coming from managerial bourgeoisie backgrounds. The state of Labour in Scotland is dire.

Despite all this, the party distracts itself with factionalism, foreign wars, or attacks on the party’s youth wing. By dismissing any change to Scottish Labour’s position on independence as “fantasy“, the Labour movement risks losing touch with reality. The party is refusing to acknowledge a looming constitutional crisis or how broken the current setup is – a view shared by many voters.

The constitution of the UK is a mess. Examples include how Scotland and Wales are disproportionately represented in Westminster. Both have more MPs per capita than England and constituencies of wildly varying sizes. Moreover, Scottish and Welsh voting patterns fail to follow nationwide patterns. This shows how the issues and concerns of these voters are different to nationwide issues.

Representation at Westminster has been described as “bankrupt“. One line used in both popular debate and the official Yes campaign is that Scotland doesn’t “get the government it votes for“. Yet hardly anybody gets the government they vote for, and nobody likes it. Nobody likes the electoral system either. The current constitution utterly fails to benefit the people of Scotland, and it’s also failing its primary purpose of holding the UK together.

This goes further than Scotland, though. Lopsided devolution has left England with less power over its own affairs than the UK’s other three nations. Proposals like ‘English Votes for English Laws‘ were intended to give English MPs veto power over legislation which only affected England. These came to the fore when the balance of power at Westminster depended on the DUP or SNP. But they were only to be retreated again with the Tories’ ‘crushing‘ 2019 majority. The constant conflation of England with the UK overshadows how a centralist, unionist system harms England. Moreover, power, culture, wealth, and jobs all gravitate towards London. And unaddressed feelings of powerlessness and disenfranchisement, however nebulous or untrue, lead to geopolitical shocks like Brexit. So the system must be seen to be doing something about the imbalance of power in the UK. Redistribution of power must be seen to be believed.

A constitutional convention and democratic federalism

What the Labour left must bring to the constitutional debate is a third option. An option that breaks the divisive unionist-independence binary and is also electorally beneficial, as it differentiates Labour from both Tories and SNP. An option that is visible, participatory, and democratic.

Constitutional conventions are used by democracies in crisis and renewal to define themselves going forwards. Scotland itself hosted the 1989 Scottish Constitutional Convention. This was a meeting of several Scottish parties along with “churches, unions, business, and industry“. The aim of the convention was to design a plan for devolved Scottish government. Despite initially endorsing the convention, the SNP later withdrew as neither Labour nor the Lib Dems were willing to consider independence as a proposal. Since then, the once-perceived importance of the convention has faded in the public consciousness.

A UK-wide constitutional convention including all parties, civil and community groups, and representatives of the people would avoid these shortcomings. And it would be politically impossible for the SNP to refuse if they wish to make headway with undecided voters. It’s also important that Scottish independence is put forth as a serious and viable option on the negotiating table. This is not to say a new independence referendum should never take place. Rather a constitutional convention would allow all involved to clearly define and explain their positions and solutions to the situation the UK is in.

Conveners could widen the scope of such a convention to address pressing constitutional issues. Topics could include the Northern Ireland protocol, a devolved English parliament, the North-South economic divide, or a federal Britain. All of these need wide, public debate. It would allow English people to properly develop an understanding of Scotland and the union. And everyone would be able to voice their opinions on the union. A convention could craft a model of Britain that is suitable for the modern era.

A convention would also benefit the independence movement itself. Any second referendum would no longer rehash old arguments from 2014. It would be an actual plebiscite (a public vote) on a new constitutional settlement. Three options could be put to the Scottish people:

Scotland and the left

If nothing changes, the Scottish left faces a long, dismal slide into obscurity and irrelevance. Nationalist positions in council, at Holyrood and at Westminster, are secure. Nationalist rhetoric plays just as well now as at the 2011 election. While factional psychodrama plays out at a UK-party level, Scottish Labour has an opportunity to reshape the debate. A constitutional convention will offer a new, unifying proposal.

Conventions aren’t the only way to effect populist constitutional change. Labour’s ongoing Constitutional Commission will hopefully shape the party’s position in future. Leftists need to represent working-class communities in the activities of the Electoral Reform Society. And they need to participate in the democratically horizontal Peoples’ Assembly. But a deep-seated and seemingly intractable problem requires a radical solution – a total overhaul of the current British constitutional settlement.

The fact remains that for the past 12 years, the pro-independence movement has consistently been able to contrast the SNP’s social democratic incrementalism with Tory austerity and greed. Unionism ties the left in a Gordian knot, opposing the UK government whilst defending the union to the Scottish people. For the sake of the working-class, the left must think outside the box to defeat both nationalism and capitalism.