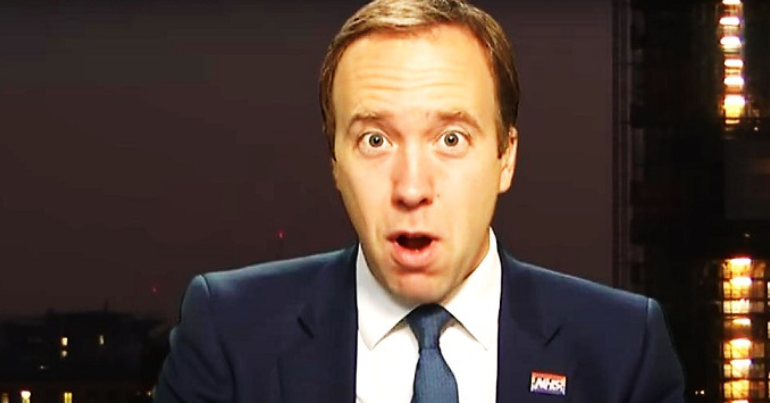 The High Court issued a damning judgement on the government’s handling of coronavirus (Covid-19) in care homes on 27 April 2022. It concluded that decisions made by disgraced former minister Matt Hancock and Public Health England (PHE) were both irrational and unlawful.

Hancock often seems to be defensive of his role as health secretary during the pandemic. He’s arguably proud even, in his claims of acting with honesty and integrity, doing everything he could to save lives and putting a “protective ring” around care homes. But for all his assertions of his own performance, when you even scratch the surface of the evidence, his performance was disastrous.

Policies issued in March and April 2020 failed to take into account the risk of asymptomatic transmission to care home residents. This occurs when a person shows no symptoms of the disease but can still infect others around them.

The government policies and guidance issued for care home staff in March 2020 did not protect residents from infection. In fact, they did the opposite. The judgement shows that at the time, guidance said carers did not need personal protective equipment (PPE):

if neither the worker nor the individual receiving care had symptoms.

However, this was a requirement for healthcare staff working in other health settings. Testing, isolation, or use of PPE was not required, even for new residents.

There was no guidance given on restricting the amount of visitors or contractors. Agency staff were actively encouraged to work in more than one home. This would increase the chance of an asymptomatic carer spreading the virus between sites.

Hancock was health secretary at the time of the crisis. He had overall responsibility for the NHS, social care policy and PHE. When asked about the court’s judgement, he told ITN News:

I wish that the knowledge about asymptomatic transmission had been…I’d known it earlier because then we have better outcomes.

Maybe they were hoping nobody would read the judgement? How can they claim to be unaware, given the sheer extent of uncontested evidence in the report?

So, either the evidence is false or their claims of ignorance are.

The issue isn’t that asymptomatic transmission was “known” as a scientific fact. It’s rather that it was known to be happening and was therefore a risk. It was noted by SAGE as early as January. The study published in March suggested up to half of all transmissions were asymptomatic. Yet, the guidance issued to care homes in April made no mention of this risk.

The lawyer and writer David Allen made the following point about Hancock’s statement:

The switch midway through that sentence is interesting – he seems to go from wanting to say that knowledge about asymptomatic transmission had not been known earlier to carefully stating that he personally did not know.

A policy requiring testing for all patients transferred from hospital to care homes was introduced on 15 Apr 2020. Tragically, for many thousands of elderly people, this was too little and far too late.

There were 25,615 excess deaths of care home residents in England and Wales during the first wave of the pandemic. If it helps to visualise that, the London 02 arena has a maximum capacity of 20,000.

My uncle was one of them.

He died on 20 April 2020, in a care home, of coronavirus, alone. His name was Reg Griffiths – or to give him his official title, major R. Griffiths MBE TD. He worked as a civil servant, rising through the ranks to a senior position. He did his national service and then joined the territorial army in his spare time. Awarded an MBE and Territorial Decoration, a more loyal servant of the state you could not get. Yet, when he was at his most vulnerable, that state he had served so faithfully all his life utterly failed him.

Dr Cathy Gardiner and Fay Harris fought to challenge the government’s handling of the crisis by judicial review. This is a court process where judges decide if a public body has acted lawfully. Gardiner’s father was Michael Gibson. He died in a care home on 3 April 2020. The death certificate stated probable coronavirus as he was not tested. Harris’s father, Donald Harris, a former Royal Marine died of coronavirus on 1 May 2020.

Gardiner wrote about her father’s passing on her Crowd Justice webpage, saying that she:

could not hold his hand and give him a smile near the end.

I am extremely angry that an ill-thought out policy has caused me, and thousands of others, so much anguish. I knew that losing my father would be tough, losing him in these circumstances is truly devastating.

The evidence submitted for the judgement is extensive and thorough. The report lists events from 31 December 2019 through to 1 May 2020. It shows what happened each day and what information was available. It references many academic papers, study results, and articles. There are extracts from meeting minutes, reports, and papers from the three groups of experts providing scientific advice to the government. These were: the Scientific Advisory Group for Emergencies (SAGE), Scientific Pandemic Influenza Group on Modelling (SPI-M) and the New and Emerging Respiratory Virus Threats Advisory Group (NERVTAG).

As early as 28 January, minutes from a SAGE meeting stated:

there is limited evidence of asymptomatic transmission, but early indications imply some is occurring.

The results of a study on 8 March stated:

Strong and effective countermeasures should be implemented to prevent or mitigate asymptomatic transmission during the incubation period in populations at high risk.

Given this scale of evidence, the decision to release untested patients to care homes is staggering. It was not even considered as a risk to care home residents. The government placed the most vulnerable population at the highest risk. This was at a time when the government advised the general public not to meet in groups, to wear masks, and to socially distance.

BBC News reported Hancock’s spokesperson went on to release a further statement noting that the case:

comprehensively clears ministers of any wrongdoing and finds Mr Hancock acted reasonably on all counts. The court also found that Public Health England failed to tell ministers what they knew about asymptomatic transmission.

Hancock’s attempt to blame PHE for not telling him about asymptomatic transmission is utterly ridiculous. PHE was an executive agency of the Department for Health and Social Care and reported to him. It seems a cynical ploy to make a now disbanded department take the flack for his own shocking response to the coronavirus crisis. In August 2020, Hancock announced that he was scrapping PHE. He was replacing it with a new agency, the National Institute for Health Protection. There was widespread criticism of the move at the time as reported in the Guardian. The British Medical Journal reported that:

…healthcare leaders said that the agency [PHE], which formed in 2013, was being scapegoated by ministers who were ultimately responsible for the country’s response to covid-19.

In the same article Chaand Nagpaul of the British Medical Association (BMA) said:

We must absolutely not allow PHE and its staff to shoulder the blame for wider failings and government decisions.

It did seem a very peculiar move to abolish a public health body in the middle of a pandemic. In keeping with the Tory penchant for cronyism, Hancock handed control of the new agency to his friend Dido Harding. Consequently, there was an outcry over the appointment as reported by the Mirror. Harding’s husband, Tory MP John Penrose, was paradoxically Johnson’s “anti-corruption champion” at the time. Penrose sits on the advisory board of 1828, a right-wing think tank that calls for the replacement of the NHS with an insurance system.

Subsequently, in February 2022, the Good Law Project reported Hancock was found to have acted unlawfully (again) in his appointment of Harding. The Mirror reported a spokesman for Hancock saying:

the claim brought by Good Law Project fails in its entirety.

Is it me, or is there a pattern emerging here?

A public inquiry versus preparedness

The government dithered and delayed before finally consenting to a public inquiry into their mishandling of the pandemic. The public hearings are due to start in 2023. Quite some dithering and delaying, that.

set up to examine the UK’s preparedness and response to the Covid-19 pandemic and to learn lessons for the future.

To examine preparedness they may want to consider a 2020 report from the Chartered Institute of Public Finance and Accountancy (CIFPA). Entitled How fit were public services for coronavirus?, it reveals the shocking state of adult social care (care homes). The report analyses the level of resilience and preparedness in public services leading up to the 2020 pandemic. As shown in the graphics, the picture for care homes looks particularly bleak. Adult social care received the lowest fitness rating in all areas. Notably, it ranked performance of care homes going into the crisis as “much worse than in 2010″: 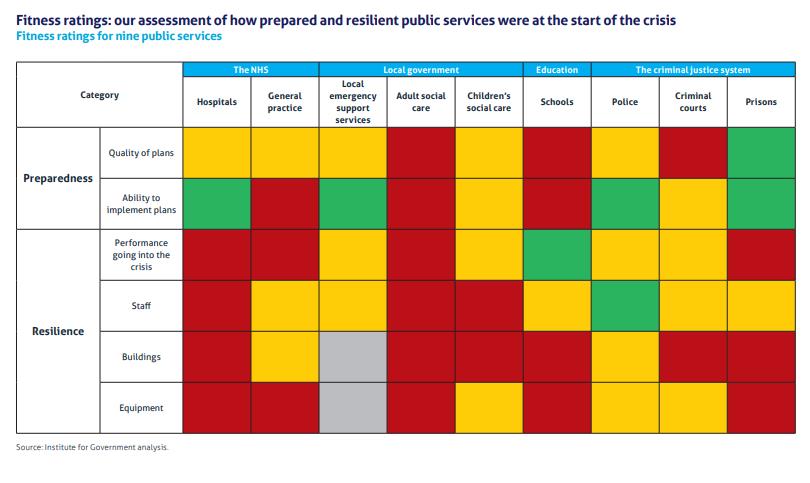 This is a direct consequence of years of Tory neglect and under-investment.

Unfortunately, a public inquiry can’t determine criminal or civil liability. So nobody will be held accountable for the unlawful decisions that led to this unqualified disaster.

Hancock said he had thrown a “protective ring” around care homes. In reality, his decisions contributed towards a pile of corpses too big to fit inside a stadium.

Jason Coppel, the lawyer who brought the judicial review, said the failure to protect the care home population represented:

In my opinion, Hancock’s a criminal and a liability whatever the toothless inquiry decides.

Losing my uncle to coronavirus was awful – made all the worse because none of his family were able to be with him in his final days. It didn’t have to be this way, but for the incompetence and inability of a Tory weasel promoted far beyond his capabilities.

My condolences to all who’ve lost loved ones.