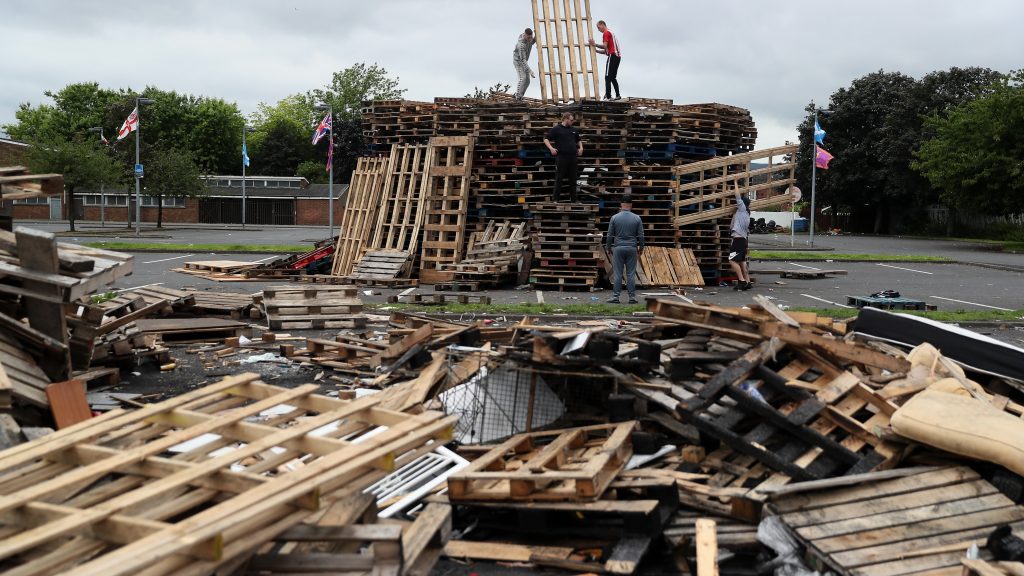 Simon Byrne condemned what he branded a “cynical ploy” by the east Belfast Ulster Volunteer Force (UVF), acknowledging it was a factor in the PSNI’s ultimate decision not to move against the bonfire builders.

Mr Byrne was referring to ad hoc events staged during the four-day stand-off with the authorities over a bonfire built in the car park of Avoniel Leisure Centre.

They included a party that saw bouncy castles inflated at the car park entrance and a rally where local women formed a human chain around the bonfire.

The wrangle over the fate of the bonfire ended on Thursday after councillors backed down over plans to demolish it.

Belfast City Council abandoned an attempt to remove the structure when hired private contractors pulled out of the job after menacing graffiti threats were daubed on walls close to the site purporting to identify them.

Loyalists manned the site 24 hours a day during the impasse, barricading the gates a number of times in anticipation of the police moving in.

At a press briefing on Saturday, Mr Byrne rejected any suggestion the names of the contractors were leaked from within the police, insisting there were “no facts” to support such a contention.

It has emerged that police units were poised for deployment on two occasions during the week to escort contractors to the site – overnight on both Tuesday and Wednesday – but the plans were aborted at short notice because contractors pulled out on each occasion.

Mr Byrne was challenged on the police’s handling of the issue as he fielded media questions at PSNI headquarters.

He denied the service had been faced down by the UVF, insisting he would not tolerate the organisation.

“We have not walked away from this at all,” he said.

Mr Byrne added: “Frankly what we saw the other day was a considered and cynical attempt to put us, the PSNI, into a dispute between communities.

“If you think an organisation that is prepared to put women and children in front of a bonfire in the expectation we are going to appear in large numbers in land rovers and go into that area and create chaos and mayhem, I think it was a really cynical ploy and I condemn it.”

Asked if the presence of women and children on site was a factor in the police’s ultimate decision not to move in, he replied: “Absolutely, because if you put yourselves not just in my shoes but the front-line commanders, were you going to storm that leisure centre in an aggressive way with women and children in front of you?

“It was a cynical ploy to put us off the scent.”

On a suggestion that the UVF had taken on the police and won, Mr Byrne responded: “At the end of the day if we had stood here this morning, or on another day, where I was having to defend the actions perhaps of my officers who went in with public order equipment where there would probably have been large-scale disorder as we confronted a hostile crowd, you’d be condemning police action.”

As part of the fallout from the episode, the council has asked police to investigate how closely-guarded details around contractors came into the public domain.

Mr Byrne addressed claims that the leak may have emanated from within the police itself.

“As far as I know at the moment there are no facts that support the notion that anyone here leaked any information to anyone else,” he said.

“Clearly if anyone knows different they should come forward and equally if the position changes we will refer that matter to the ombudsman (PSNI watchdog – the NI Police Ombudsman).”

It is understood the police investigation is centred on the suspicion that the leak emanated from within the council.

The Avoniel bonfire was lit on Thursday night along with scores of others across the region as loyalists ushered in the main date in the Protestant loyal order parading season – the Twelfth of July.

While events leading up to and during the Twelfth have often been marred by violence in the past, this year there no significant adverse incidents.

Mr Byrne said it was a “good news story” for his officers.

“I think the overall message is, and I know there’s a lot of concern and emotion in a number of communities about how we operate, but if you look at the end game no one was hurt, nothing was damaged and we had a peaceful two days.”