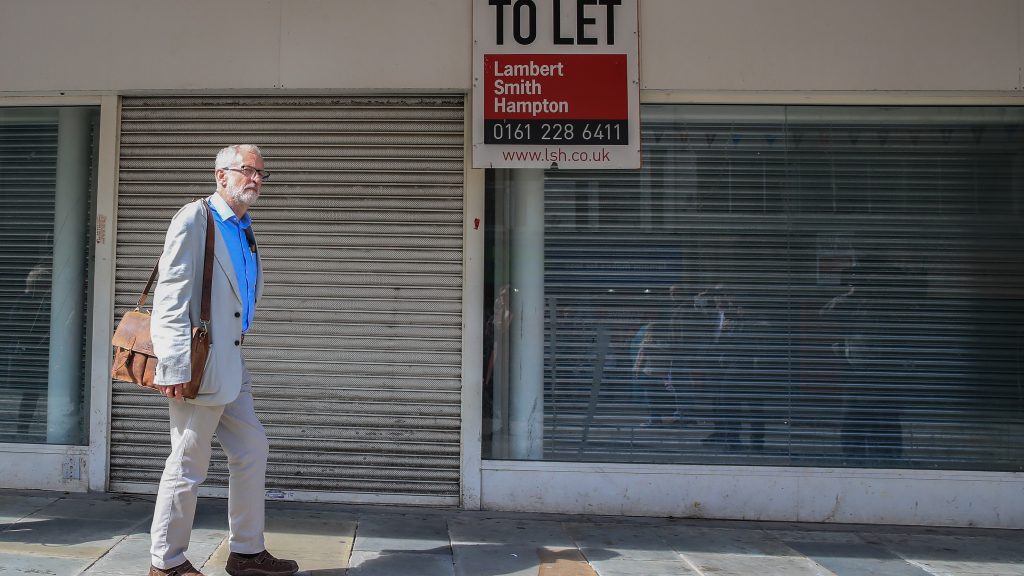 Labour leader Jeremy Corbyn has said there is “nothing more depressing” than seeing town centres decline as shoppers turn to out-of-town warehouses for online deliveries.

He wants councils to have the power to reopen abandoned shops which have been left vacant for 12 months or more and bring back into use some of the estimated 29,000 physical retail units abandoned.

Under Labour’s plan, local authorities will be able to turn vacant shops over to start-ups, co-operative businesses and community projects.

Mr Corbyn visited Bolton, Greater Manchester, on Saturday and dropped in to two former empty stores in the town’s Market Place Shopping Centre which are now home to a music charity and a ping pong “parlour”.

He said: “The issue across the country is a very large number of town centres have got lots of boarded-up shops, and that’s depressing. It drives people away and diminishes our sense of community in our town centres.

“We want to change that. Hence our policy proposals today are that local authorities should have the power to take over shops that have been deliberately kept empty and just used as an opportunity to make some money when the value may go up in the future, and make sure they are brought into use.

“Because when we have a community around the town centre where all the shops are in use and occupied, people feel much safer and it’s also about creating that sense of community.

“There is nothing more depressing than seeing town centres declining and out-of-town warehouses doing online deliveries to people. That is not building a sense of community.

“So it does mean we have got to change the way in which we approach our communities and town centres.”

“What we do have to do is have a planning regime which allows local authorities to intervene to ensure that we keep shops going and can also make sure there is a diversity of shops, because you don’t want a place that is just charity shops or just estate agents. You need that diversity to bring you in. You need to buy bread as well as clothes.”

Mr Corbyn said he was impressed by what he saw in Bolton, and added that a community project in a shopping centre is a “two-way street”.

He said: “Yes it does provide a space for the charity to operate from, the music charity for example is doing well, but it brings more people in who are then going to other places.”

Mr Corbyn strapped on a Tokai electric guitar at the Trust Music studio, a charity where people can drop in and learn how to play a musical instrument or sing in choir.

Local charity band Rock of Ages perform weekly at Trust Music and they were happy to take a request from Mr Corbyn to play a rendition of Queen’s Crazy Little Thing Called Love.

Mr Corbyn was less in his comfort zone when playing table tennis at the ping pong parlour, an initiative by Table Tennis England where the public can hone their skills at the sport.

He told the PA news agency of his match with former Bolton West MP Julie Hilling: “I’m not a ping pong player at all. We have just produced for you the worst ever exhibition match of ping pong that ever was.”