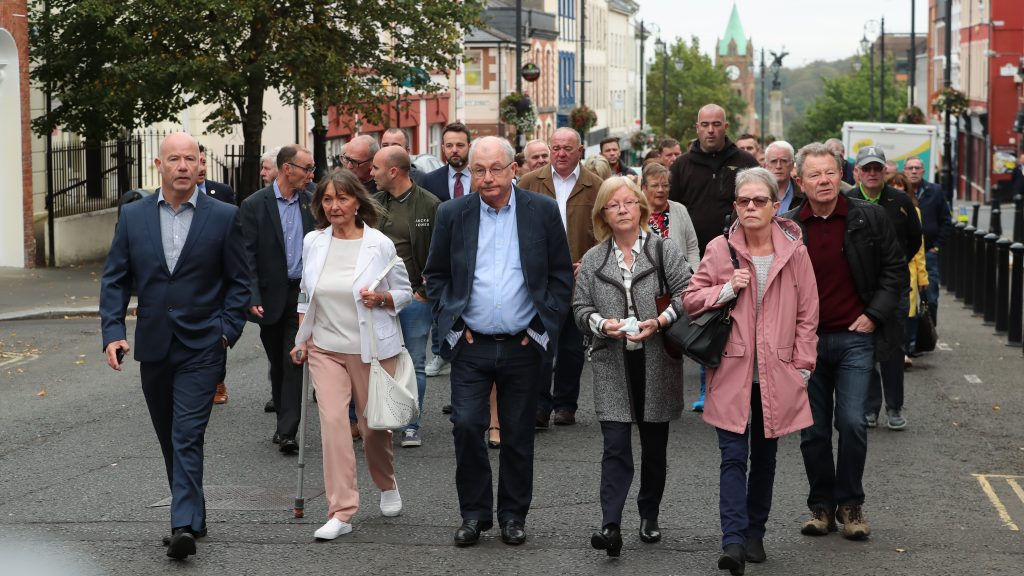 The prosecution of a former soldier accused of two murders on Bloody Sunday has reached a courtroom for the first time.

The case of Soldier F, who also faces five attempted murder charges in relation to the shootings in Derry on January 30 1972, was heard before a district judge in Derry Magistrates’ Court.

The veteran was not present for the short hearing on Wednesday morning.

The ex-paratrooper’s barrister Mark Mulholland QC confirmed his client would be challenging the attempt to send him to Crown Court trial by testing witness evidence at a committal hearing in the Magistrates’ Court.

“It’s our intention that committal proceedings will necessitate the calling of evidence,” he said.

Mr Mulholland’s application to adjourn proceedings to December 4, in order to provide time to assess what witnesses the defence wish to call, was granted by District Judge Barney McElholm.

The judge also granted an interim anonymity order to continue the protection of the accused’s identity.

Prosecution lawyer Sam Magee said he did not object to the adjournment or the granting of the anonymity order.

Mr McElholm said he accepted it would “take some time” before the committal could proceed.

“It’s important that this is all done with a degree of fairness to all concerned in these matters,” he said.

The decision to prosecute the ex-paratrooper was announced by the Northern Ireland Public Prosecution Service in March.

He was not required to attend court at this stage of the criminal proceedings. Mr Mulholland requested that Soldier F be excused from appearing in court until the committal hearing.

Bloody Sunday became one of the most notorious incidents of the conflict in the north of Ireland when members of the Parachute Regiment opened fire on a crowd of civil rights demonstrators, killing 13 that day. A 14th man died later from his wounds and seventeen others, including two women, were injured.

Relatives of those killed on Bloody Sunday walked together to court ahead of Wednesday morning’s hearing.

They assembled in the Diamond area of the Derry city before walking together up Bishop Street to the courthouse. Police closed the road to facilitate the walk.

Outside court, Mr McKinney’s brother Mickey said: “This is a very significant event for us on the journey towards achieving the third and final demand of the Bloody Sunday justice campaign – the prosecution of a soldier for murder and attempted murder on Bloody Sunday.”

Liam Wray, the brother of James Wray, said it was a “historic day”.

He added: “I am very nervous this morning. We are glad and relieved that his day has arrived, it’s been 47-and-a-half years.”

Family members watched from the public gallery of the court during the legal proceedings.

After the hearing, Ciaran Shiels, solicitor for the McKinney family and the four wounded victims, said the relatives anticipated a long journey through the courts.

“The families are in it for the long haul, as they always have been,” he said.

On the issue of anonymity, Mr Shiels said: “We intend to make submissions to the Public Prosecution Service that Soldier F is prosecuted in a transparent manner as consistent with the majority of the prosecutions of soldiers in respect of the murder and attempted murder of Irish civilians here.”

The solicitor said he expected any trial to be ultimately heard without a jury in Belfast Crown Court.