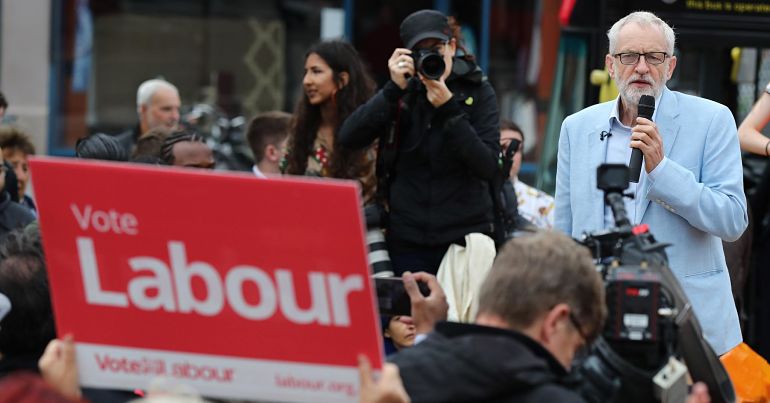 Labour remains determined to cut off the prospect of a no-deal Brexit before pressing for a general election, Jeremy Corbyn has said.

A senior SNP MP said the opposition parties could stage a vote of no-confidence in the Government as early as next week in a bid to oust Boris Johnson.

It follows talks at Westminster by party leaders aimed at thwarting any attempt by the Prime Minister to push through a no-deal break on October 31 against the will of Parliament.

Speaking to reporters at a rally in Chingford, Essex, Mr Corbyn said he stood ready to lead an interim government if Mr Johnson was forced from No 10.

However he said his first priority was to ensure the Prime Minister complied with the so-called Benn Act which requires him to seek a further Brexit delay if he cannot get a new deal with the EU.

“Our priority, all of us, is to prevent a no-deal exit from the European Union on the 31st,” he said.

“At that point, we’re ready for an election. But the priority is to prevent a no-deal exit, with all the problems this could cause the people of this country.”

Former chancellor Philip Hammond accused the Prime Minister of failing to negotiate seriously with the EU while the speculators who backed him stood to make a killing in the event of no-deal.

“As his sister (Rachel Johnson) has reminded us, he is backed by speculators who have bet billions on a hard Brexit – and there is only one outcome that works for them: a crash-out no-deal Brexit that sends the currency tumbling and inflation soaring,” he wrote in an article for The Times.

“So they, at least, will be reassured to see no evidence at all that his government has seriously pursued a deliverable deal; still less that it has been pursuing a deal that could get us out by October 31.”

Meanwhile the SNP MP Stewart Hosie said that a no-confidence vote might be the only way to stop no-deal.

“We have to do that because there is now no confidence that the Prime Minister will obey the law and seek the extension that Parliament voted for only a few weeks ago,” he told the BBC Radio 4 Today programme.

“If we are serious about the extension, that is the only game in town.”

So far, opposition leaders have been wary of tabling a confidence vote, fearing Mr Johnson could, if he is defeated, simply delay a general election until after October 31 by which time Britain will be out of the EU.

Mr Hosie acknowledged the plan could only work if an alternative government capable of commanding a Commons majority had been “pre-agreed” before the vote.

However the Liberal Democrats, as well as rebel Tories who had the whip withdrawn, have made clear they that they are not prepared to see Mr Corbyn enter No 10 as Prime Minister.

However Mr Hosie said it was “self-evidently the case” that as the leader of the second largest party Westminster, Mr Corbyn should have the first chance of forming an administration.

“If Jo Swinson and the Lib Dems are actually serious about their stopping Brexit position then they need to stop playing political games, get on board with everybody else,” he said.

“All of the opposition parties and the Tory rebels need to be on board with a single plan.

“If that is not in place and effectively pre-agreed, then we might end up having the general election on Boris Johnson’s terms, allowing him to run down the clock and crash out without a deal.”

Mr Corbyn confirmed that in such an event, he would expect to be given the first crack at forming a government with the sole purpose of seeking a Brexit extension and then holding a general election.

“The normal process is that when a government collapses, the leader of the opposition is invited to form a minority government in order to carry through a specific and strictly limited process which would be to ensure no crash-out and to prepare for a general election,” he said.