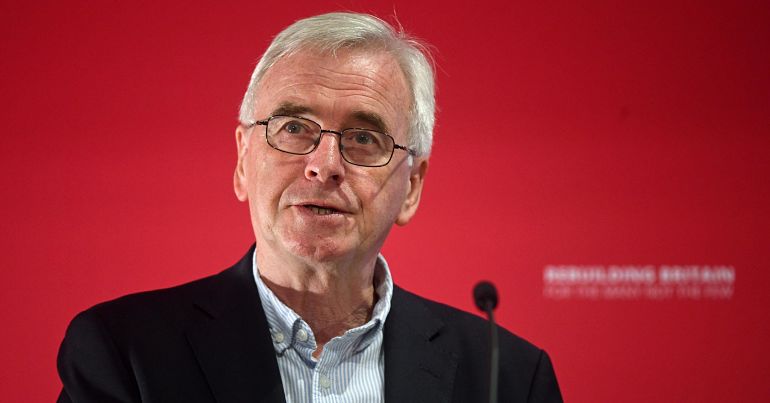 Labour is calling on the Cabinet Secretary to investigate claims Boris Johnson is pursuing a no-deal Brexit to help currency speculators and hedge funds who bankroll the Tories.

In a letter to Sir Mark Sedwill, shadow chancellor John McDonnell expressed concern that big Conservative donors who backed Mr Johnson had a financial interest in a no-deal break.

His intervention comes after former chancellor Philip Hammond accused Mr Johnson of failing to pursue negotiations with the EU seriously while speculators were set to make a killing if the UK left without an agreement.

Writing in The Times, Mr Hammond – one of 21 Tory MPs to have the whip withdrawn after rebelling over Brexit – said he was voicing concerns shared by the Prime Minister’s sister, Rachel Johnson.

“Boris Johnson asserts, ever more boldly, that we will leave the EU on October 31, ‘with or without a deal’,” he wrote.

“But as his sister has reminded us, he is backed by speculators who have bet billions on a hard Brexit – and there is only one outcome that works for them: a crash-out no-deal Brexit that sends the currency tumbling and inflation soaring.

“So they, at least, will be reassured to see no evidence at all that his Government has seriously pursued a deliverable deal; still less that it has been pursuing a deal that could get us out by October 31.”

In his letter to Sir Mark, Mr McDonnell said the Prime Minister and the Conservative Party had received significant sums from individuals backing no-deal – some of them involved in hedge funds.

At the same time, he wrote there had been widespread reports of increases in “short positions” being taken against sterling in anticipation of a possible no-deal, while Mr Johnson had expressed a willingness to leave the EU without an agreement.

“These three facts have caused concern that the Prime Minister may have a conflict of interest,” he wrote.

“Donors to the Conservative Party and/or Prime Minister could stand to gain from a no-deal Brexit (even if only through cushioning losses by adopting short positions).

“The Prime Minister could reasonably be seen as having an interest in securing a no-deal Brexit to financially benefit his donors.”

He added: “It is becoming increasingly apparent from public comment that the Prime Minister is bringing into doubt whether he is upholding the highest standards, thereby further undermining public confidence and trust in him and his Government.

“It is important for public confidence and trust in the House of Commons that any real or apparent conflict of interest is investigated. Only an independent inquiry with access to full facts can settle this.”