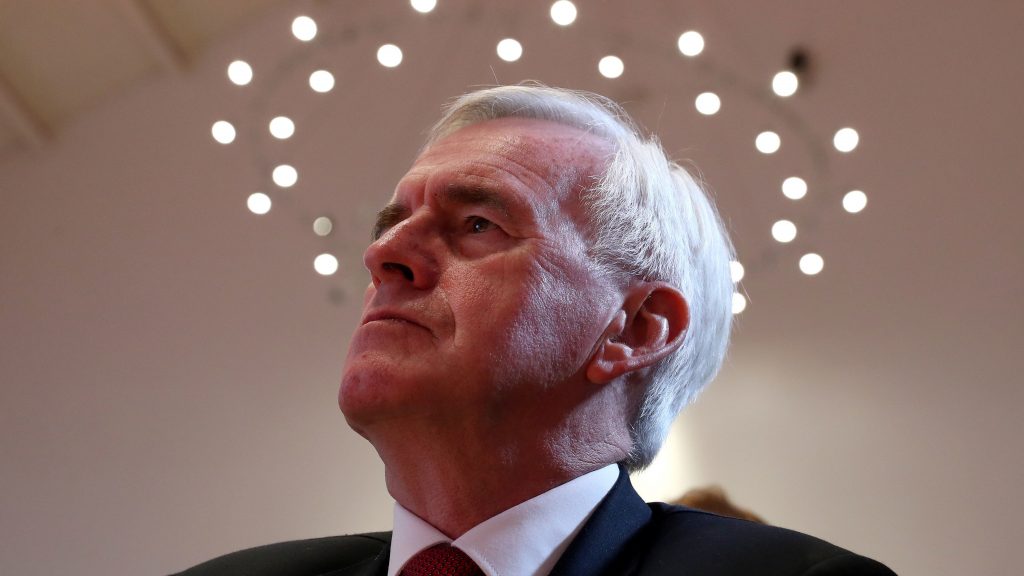 Labour’s general election manifesto will be written “from the grassroots up”, John McDonnell said as he kicked off a UK-wide pre-poll campaign tour in Essex.

The shadow chancellor addressed the Road to Rebuilding the Economy conference during a visit to Colchester on Saturday, setting out the party’s plan to rebuild the economy.

He told Sky News: “The idea behind this is that as we go into the next election, our manifesto will be written from the grassroots upwards, so people preparing their local policy programmes, their local economic programmes as well.

“We’ll do the same in this general election as we did the last one: when we publish our manifesto, I’ll publish what we called our ‘grey book’ which was a costing of every policy, identifying the funding source.

“And then alongside that manifesto people would be able to judge just how we’ll be able to roll out and afford our programme.”

Mr McDonnell last week pledged to deliver free personal care and reduce the working week to 32 hours within 10 years under a Labour government.

Ahead of the visit, he said people in Essex have been “let down badly” by the Conservative Government which has “inflicted over nine years of austerity on these communities”.

He added: “Our struggling high streets are one of the clearest symptoms of the Government’s failure to invest in our communities.

“Labour’s five-point plan for British high streets will help breathe life back into our struggling town centres. And Labour will deliver a fair deal for Essex’s coastal communities.

“Labour’s plan to introduce a Real Living Wage of £10 an hour by 2020 will boost pay for over half a million low paid jobs in the East of England.

“The next Labour government will introduce personal care free at the point of use in England, as part of our new National Care Service.

“We will increase income tax on the top 5%, the people who can afford it, who can pay a little bit more. But also tackle tax dodging and reverse some of the giveaways to the corporations.

“Labour will tax the rich and giant corporations to end austerity, properly fund public services free at the point of use, and rebuild our economy so it works for the many, not the few.”

The one-day conference in Colchester formed part of a listening exercise to help develop the party’s next manifesto, Labour said.