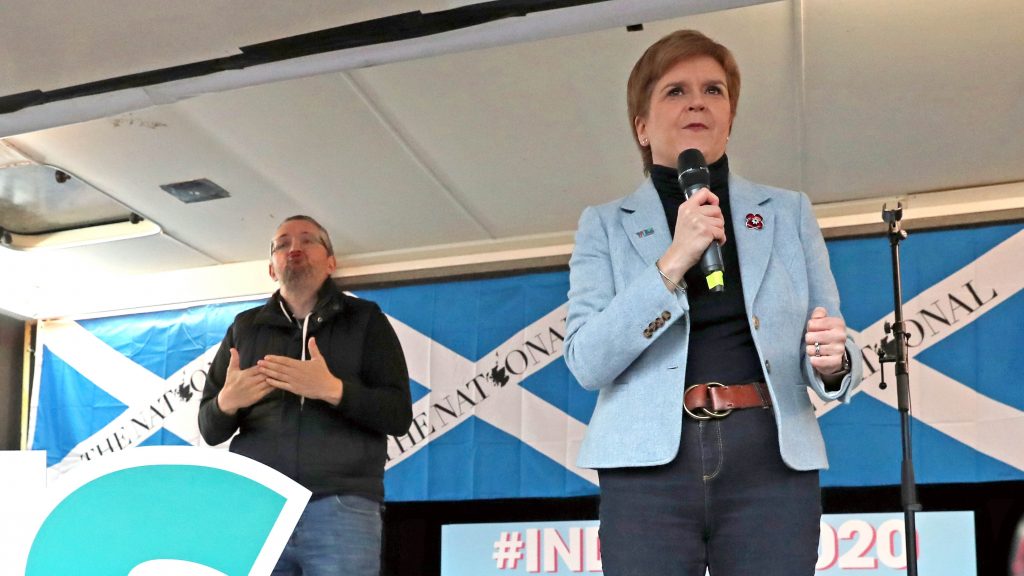 Scotland’s future is “on the line” in December’s General Election, Nicola Sturgeon said as she called on Scots to back her party in that ballot to send a “resounding message” to Westminster.

The first minister and SNP leader urged Scots to “demand the right to choose a better future”.

Ms Sturgeon has already put the issue of a second independence referendum – which she wants to hold next year – at the heart of the SNP’s election campaign.

And as she addressed a rally of independence supporters in Glasgow’s George Square, she called on voters to  “demand the right to choose an independent future for Scotland” on December 12.

The event, which was staged by the pro-independence newspaper The National, was the first such rally that Ms Sturgeon has addressed since the referendum campaign of 2014.

According to the organisers, 20,000 people packed into the city centre square to hear the first minister and other speakers, including Scottish Brexit secretary Mike Russell and Mhairi Black MP.

The first minister told the crowd: “The General Election that we face now on December 12 is the most important election for Scotland in our lifetimes. The future of our country is on the line, and there is no doubt whatsoever that Scotland stands at a crossroads moment.”

There were boos from the audience when she claimed a victory for Boris Johnson in the election would result in “a future where Scotland gets ripped out of our European family of nations against our will, a future where the UK turns in on itself, a future of a hostile environment for migrants”.

And instead, she said: “There is a much better alternative. And that alternative is not a UK Labour government that can’t event make up its mind where it stands on the question of Brexit.”

Earlier on Saturday, Labour leader Jeremy Corbyn had argued against Scottish independence, saying if he was voted into Downing Street £70 billion of capital spending money would come to Scotland, as well as extra cash for health and education.

Mr Corbyn told reporters: “We want to see Scotland’s economy improve and the levels of poverty in Scotland, particularly in big cities, Glasgow, Edinburgh and Dundee, being reduced.

“It’s a Labour government that will do that. Scottish independence would mean a massive gap between what Scotland raises in taxation and what the Scottish people need at the present time.

“I think the much better option is a Labour government for the whole of the UK.”

She added: “We must come out in our numbers and vote in this election, vote to escape the chaos and the misery and the division of Brexit and vote to put Scotland’s future into Scotland’s hands.”

With the UK facing its first December election for almost a century, the first minister continued: “I know the nights are drawing in, I know the weather is getting colder and wetter, I know minds are turning to Christmas festivities.

“But all of us must make sure that over this next few weeks we persuade everyone we know, our family, our friends, our neighbours, our workmates, to come out on December 12 and send the biggest, loudest, most resounding message to Westminster that it is time for Scotland to choose our own future, it is time for Scotland to be an independent country.

“Let us inspire people with the positive message of everything an independent Scotland can be and everything the people of Scotland have it in themselves to achieve.”

Annie Wells, a Conservative MSP for Glasgow, said however, that the election was about  “stopping Nicola Sturgeon from dividing our communities all over again” – and insisted only the Tories could achieve that.

Ms Wells, who was also campaigning in the city, said: “While Nicola Sturgeon is banging on about indyref2, I’m out talking to people about the state of their local schools, the drug deaths crisis and violent crime taking over our streets, and the problems at the Queen Elizabeth Hospital.

“Instead of tackling the day-to-day things that Glaswegians care about, Nicola Sturgeon is headlining a nationalist rally. She is showing everyone that her priority is indyref2 above everything else.

“So this election is about stopping Nicola Sturgeon from dividing our communities all over again, and only a vote for the Scottish Conservatives will do that.”