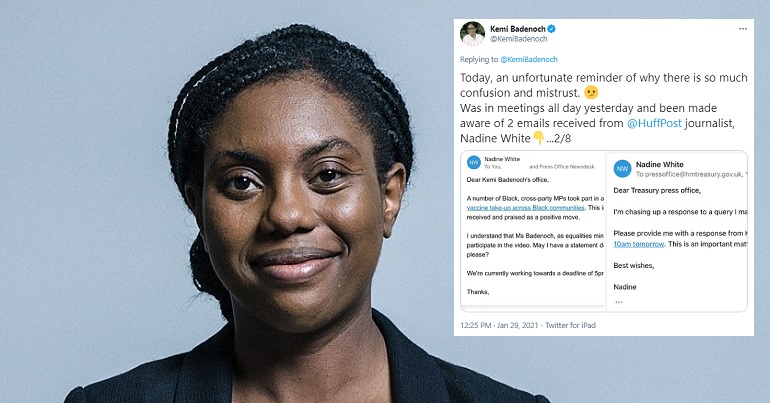 A Tory minister just leaked two private emails from a HuffPost journalist. She claimed this was because the reporter and the outlet were “making up claims” about her. The minister also accused them of “sowing distrust”. But the reality is, the journalist was doing her job. And it shows the increasing authoritarian attitude of the Tory government towards the media.

I’m not going to take any lessons from the honourable lady on race and what I should be doing on that. I think this government has a record to be proud of.

The UK is still systemically racist. But aside from this, Badenoch now has a problem with journalists asking questions.

HuffPost‘s Nadine White emailed Badenoch. It was about a video made by cross party MPs. The short film was to encourage Black people to get vaccinated:

We are working hard across govt to increase vaccine confidence. Thank you to the @Conservatives and @UKLabour MPs who took part in our cross-party video to encourage vaccine take-up across the black community pic.twitter.com/7qnR5k4zKB

So, White emailed Badenoch, her office and the Treasury’s press office asking for comment. She also sent a follow up email as she hadn’t got a response from any of them by her deadline.

Badenoch could have replied with the standard “no comment”. Or she could have cleared up the rumour. But instead, she chose to publish the emails on Twitter. And she laid into White and HuffPost in the process:

A sad insight into how some journalists operate…On Wednesday, I shared our positive, well-received cross-party video to increase vaccine confidence in the midst of so much disinformation. Last night we heard great news about the Novavax Vaccine which I’ve been trialling 🙂..1/8

Today, an unfortunate reminder of why there is so much confusion and mistrust. 😕
Was in meetings all day yesterday and been made aware of 2 emails received from @HuffPost journalist, Nadine White👇…2/8 pic.twitter.com/Kl971gpPEn

Disinformation is on the rise, yet @HuffPost are looking to sow distrust by making up claims I refused to take part in a video campaign…(which I suggested and promoted!) Even when Labour and Tory MPs work together, some in the media will still look for conflict 🙄…3/8

Firstly, it clearly wasn’t White and HuffPost “making up claims” about Badenoch. Someone else seemed to have told them about Badenoch’s alleged refusal to take part in the video. Secondly, White was merely looking into a perfectly newsworthy story. So, why would Badenoch publish her emails? Why not just reply and be done with it?

One of my reporters has had to make her Twitter profile private today because a *government minister* tweeted out screenshots of a completely standard request for comment on a story, and accused her of spreading disinformation. Absolutely extraordinary.

Young, female, Black journalists receive some of the worst abuse on Twitter, and to behave in this way is extremely disappointing – even before you consider that the person involved is the minister for equalities. We stand by Nadine for doing her job correctly, as she always does

But Newsnight‘s Lewis Goodall hit the nail on the head:

Absolute solidarity with you and Nadine. At times the way government comms have attempted to publicly shame individual journalists during this crisis for simply doing their jobs has been deeply sinister. I’d hoped we’d seen the last of it.

Oh, and he also suggested Badenoch may have broken government rules, too.

Much of the media have served to protect the Tory government during the coronavirus (Covid-19) pandemic. But others, like HuffPost, The Canary and Channel 4 News, have tried to work in the interests of the public; that is – tell the truth about the Tories’ appalling handling of the pandemic. The government strong-arming journalists in the UK is nothing new. But it has, as Goodall said, become even more sinister in the age of coronavirus. Ministers inciting hate against the media is just the thin end of the wedge.