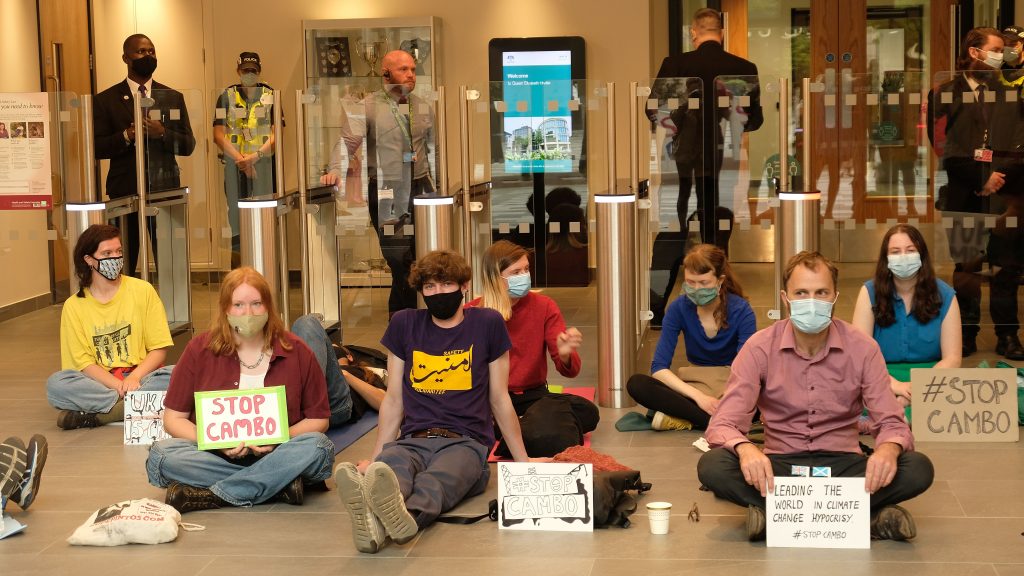 A group of climate change activists have blocked the entrance to a new UK Government hub in Edinburgh. They’re protesting against the Cambo oil field’s approval.

Twelve people entered Queen Elizabeth House at the capital’s Sibbald Walk at 7.30am on Monday 19 July. They are blocking the main entrance by sitting and lying down.

Floods are ripping through Germany. Madagascans are starving and thirsty in a fierce drought.

North Americans are dying in unprecedented deadly heatwaves and wildfires rage. And the Amazon is emitting more CO2 than it absorbs.

In all this chaos, the UK Government, host of the Cop26 UN Climate Negotiations, is happy to sign away 800 million barrels of oil, just so a few shareholders can turn a profit. This is criminal. The Cambo oil field must be stopped.”

The move also comes ahead of a rally at 4pm on Monday which was originally due to take place outside the Scottish Parliament building. This has now moved to continue the action at Queen Elizabeth House.

Police are currently in attendance on Sibbald Walk, Edinburgh and are engaging with a group of peaceful protesters gathered within the UK Government building.

The group says the oil field, which is off the coast of Shetland, is 30% owned by Shell and 70% by private equity firm Siccar Point Energy.

We can’t just keep on exploring for oil and gas

In May this year, the International Energy Agency said investments in new oil and gas projects and polluting coal power plants must stop to help tackle the climate crisis.

I don’t believe that we can just keep on exploring for, and producing, all the planet’s oil and gas. My understanding of the science is that if we do that, climate change will destroy the planet as we know it, and much of the life it supports.

That scares the shit out of me.