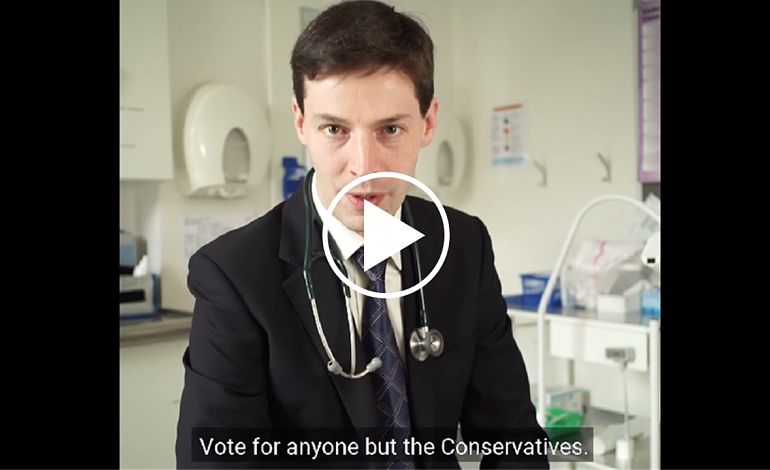 NHS staff have lashed out at the Conservative Party and people are taking note. In a video posted on Facebook, NHS front line staff have slammed the government’s handling of the NHS. As the NHS is a key issue in the upcoming election, their voice may prove a vote winner. And with over seven million views of the video and counting, the Tories could be in for a shock.

Fighting for the people

The video begins by dispelling some common myths about the NHS. From blaming immigrants, to efficiency savings, the team has cut Conservative rhetoric to pieces. Then, using facts and figures, they go on to deliver a clear message to voters: Value the NHS? Then the Conservatives must go.

There are a lot of questions we’ve been asked by voters, particularly Conservatives, about the NHS and some of the misconceptions. We felt the best way was to address these head on. For us not to stand up and tell the truth would be a dereliction of duty.

This election is huge for the NHS. Since 2010, it has been systematically underfunded to the point of near collapse. And this government just doesn’t get it. Without a big cash injection, as offered in the other parties’ manifestos, we healthcare professionals know that the crisis will become an avoidable catastrophe.

Doctors and nurses destroy the lies

The video hits on key issues without any compromise. The team slams Conservative underfunding, revealing how the NHS is facing its “largest sustained drop in funds”. The Conservatives claim the opposite.

But in regard to alleged ‘inefficiencies’, Crane responds:

The Commonwealth Fund rates the NHS the most efficient health service in the world.

We have had almost a decade of efficiency savings. For NHS staff, ”efficency savings” is just a euphemism for cuts.

Dr Fionna Martin then eviscerates the tendency to blame immigrants, telling us:

Health tourism, we estimate, costs us £200m per year. But actually in context, that’s how much it costs for us to run the NHS for 15 hours. So whatever health tourism is, it’s not the cause of our struggling, underfunded NHS.

1 in 4 doctors and 1 in 6 nurses is an immigrant. Immigrants aren’t ruining the NHS. They’re running the NHS.

The NHS is not safe in Conservative hands

Finally, the video ends with a chilling warning. The members of the team deliver their own personal pleas, hoping that people will listen. Dr Linda Irvine GP states emphatically:

Those of us working in the NHS are deeply worried.

Martin is also critical of the Conservatives’ capability to protect the NHS, telling The Canary:

The Conservatives have buried their heads in the sand.

And with a resolute tone, Dhir sums up what we have all been thinking, declaring:

The NHS is not safe in Conservative hands.

And he warns us:

We have all been patients of the NHS and all want it to still be around for our children. Use your vote wisely in two weeks, or you won’t have an NHS under this government.

If anyone you care about depends on the NHS, or on the army of undervalued and underpaid carers in our communities, don’t vote Conservative on 8 June.

Crucially, with the election moments away, and the tide turning on the Conservatives, perhaps the NHS will swing the vote. Only time will tell, but for these NHS workers, time is certainly running out.