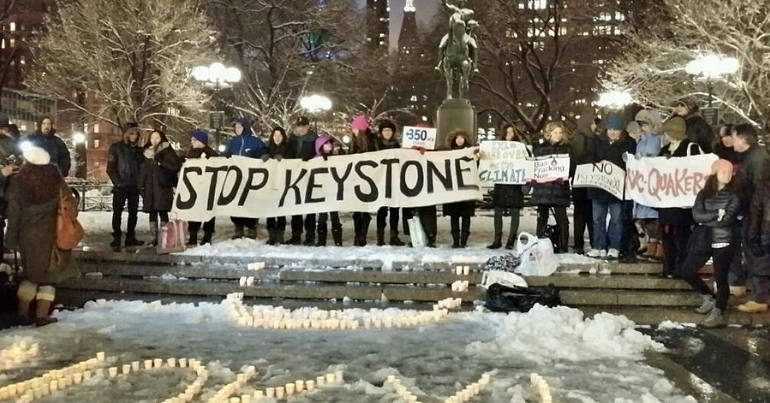 A US judge has blocked construction of the controversial US-Canada Keystone XL pipeline. In his ruling, federal judge Brian Morris said that the Trump administration had “simply discarded” the impact the pipeline would have on climate change. The ruling has been described as a “huge win” by the lawyer for campaigners against the pipeline. Trump, however, has described it as a “disgrace”.

Trump issued a presidential permit for the Keystone XL pipeline just days after he took office in January 2017. His order overturned President Obama’s earlier veto of a bill that would have allowed construction of the northern leg of the pipeline.

Obama: not a climate hero

Obama had previously endorsed the southern leg of the pipeline, boasting in 2012 that during his administration:

We’ve added enough new oil and gas pipeline to encircle the Earth and then some.

The Keystone XL would carry 800,000 barrels of oil each day from the tar sands of Alberta to refineries on the Gulf Coast.  In March 2017, a coalition of groups sued the Trump administration in an attempt to block further construction of the pipeline. The group claimed that in its haste to approve Keystone XL, the government had:

ignored significant new information that bears on the project’s threats to the people, environment, and national interests of the United States. They have relied on an arbitrary, stale, and incomplete environmental review completed over three years ago.

In his ruling on 8 November, Judge Morris criticised the State Department’s statement that climate change impacts resulting from the pipeline were “inconsequential”, and said:

The department instead simply discarded prior factual findings related to climate change to support its course reversal.

Judge Morris also said that the State Department “acted on incomplete information” in regard to potential damage to indigenous territories along the route.

Campaigners against the pipeline welcomed the decision to block construction. Judith Le Blanc, director of the Native Organizers Alliance, said:

This court decision affirms science-based decision making as the proper way to make public policy. As caretakers of Mother Earth, Native communities are organizing alternatives to fossil fuels because the future of the planet depends on it. We applaud the decision and recommit to promoting a fossil-free future.

This may very well not be the end of the Keystone XL. Trump has suggested that his administration will appeal the decision. But what is certain that whatever happens next, people will not stop fighting for climate justice.

– Read our other articles on climate chaos.