The UK is about to hold a disturbing annual event. Here's three reasons why it's wrong. - Canary Workers’ Co-op 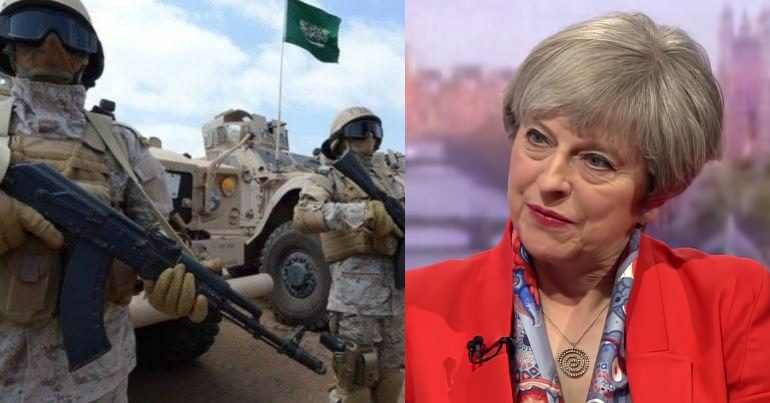 Some of the UK’s biggest arms dealers will be showcasing their work on 27 March. The annual Defence Procurement Research Technology Exhibition (DPRTE) arms fair will take place in Cardiff.

Activists are preparing to oppose the event which is partnered by, and features exhibitions from, some of the UK’s most prolific arms producers. The Ministry of Defence (MoD), BAE Systems, Rolls Royce, and Raytheon are all linked to the one-day event at the city’s Motorpoint Arena.

Here are just three of the oppressive regimes which buy from those companies involved in DPRTE.

It was all smiles from the PM when the deal was struck. But human rights groups have repeatedly condemned Erdoğan for jailing journalists and opposition politicians.

Furthermore, following Turkey’s recent invasion of the Kurdish city Afrin, the regime has been found guilty of war crimes by the Permanent Peoples’ Tribunal. The invasion has been spearheaded by airstrikes and has led to over 200,000 people fleeing their homes. Many civilians have been killed.

One Briton, Anna Campbell, died defending the Syrian-Kurdish territory. She was reportedly killed in a Turkish airstrike on 15 March.

Upon the capture of the town, Turkish forces and allied rebels tore down statues celebrating Kurdish heritage. Shops and houses were also looted.

Protests in the UK over Turkey’s actions have continued. Earlier this month, train stations were occupied. Protesters have also targeted BAE offices near Bristol.

Saudi Arabia is one of the UK’s biggest customers for arms. The UK government has approved licences worth £6.8bn for the country over the past five years. The regime is one of the most oppressive around, and a key architect of one of the world’s worst humanitarian crises.

The Saudi-led coalition began airstrikes in Yemen against the Houthi rebels in March 2015. It has since been accused of committing war crimes and serious violations of international law. According to leading aid agencies, over 75% of Yemen’s population are now in urgent need of humanitarian aid. That figure includes 11.3 million children.

In 2017, May claimed it was important that the UK maintains its close relationship with Saudi Arabia so it can influence decisions. However, Amnesty International released a statement recently saying US and UK arms sales to the country are “devastating civilian lives”.

Saudi Arabia’s crown prince Mohammad bin Salman, who oversees the Yemen offensive, visited the UK in March. During the trip, he agreed a provisional deal with the government, for fighter jets reportedly worth £10bn to BAE Systems. Hundreds protested his visit.

Another valued customer of the UK arms trade is Israel. And UK weapon technology has aided some of the nation’s bloodiest sieges.

Raytheon is a partner of DPRTE. The firm’s main UK production hub in Glenrothes was the site of protests in 2014 after it emerged that weapon technology made in the factory was being used in Gaza.

The Scottish government called for an arms embargo with Israel at the time. The UK government, however, approved arms sales to Israel just days after the bombing campaign stopped. The conflict claimed over 2,200 lives.

Meanwhile, Raytheon signed a £95m contract for missile sales with the Israeli government in October 2014.

In 2017/18, Amnesty International has accused the Israeli government of unlawful killings and subjecting the approximately two million citizens of Gaza to “collective punishment”. BAE Systems and GE Aviation, which are also partners at the exhibition, have supplied Israel with arms equipment too.

In 2017, a DPRTE organiser said the show did “not deal in the trading of armaments”. But curiously enough, if you search for ‘Cardiff Arms Fair’ online, the event is the top result.

It’s likely that the protesters, and apparently Google, will take some convincing.

– Support the protest on 27 March, as well as the Stop the War Coalition and Campaign Against Arms Trade.