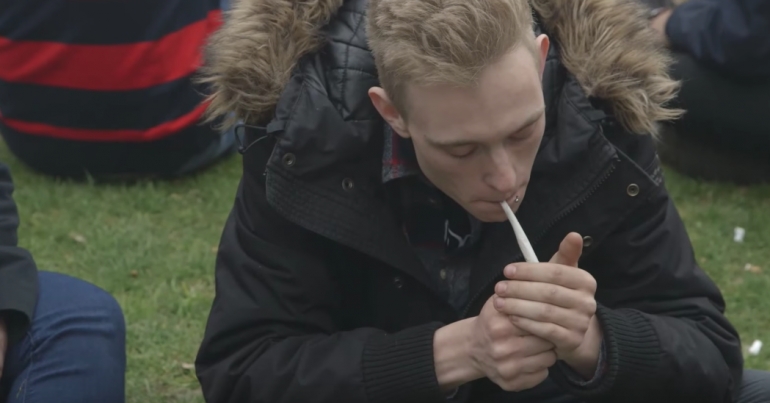 Camden Council has launched a new campaign warning people about the dangers of cannabis. In Camden Town in North London, you can now find posters that say a “bit of weed” can “ruin people’s lives”.

Town Hall leader Georgia Gould said she has never used cannabis herself, adding that the poster is not meant to judge those who have. Green Party councillor Sian Berry argued the poster:

sounded like something going back to the 1980s and ‘Just Say No’, which we know didn’t work.

Gould emphasised that the poster campaign is about the dangers of the drugs market:

We have seen a big rise in youth violence with young people being groomed for the drugs trade. The campaign is about raising awareness and starting a debate. We all live in one community and it’s important to know what’s happening on our streets.

A lack of regulation

As The Canary previously reported, the illegal cannabis market has resulted in children and teenagers being trafficked and enslaved on cannabis farms in the UK. But the victims have tended to be non-British people, not British nationals as the poster suggests.

The harmful aspects of cannabis to which Camden councillors are pointing have to do with the fact that it’s unregulated. Keeping cannabis illegal can also make it less safe for users.

In response to the campaign, Transform Drug Policy Foundation tweeted:

The councillors’ intention might have been to raise awareness about the harmful effects of the cannabis trade. But their poster still comes across as scaremongering. The fact that it says a “bit of weed” can “hurt you” shows that Camden Council might need to rethink its perspective on cannabis.