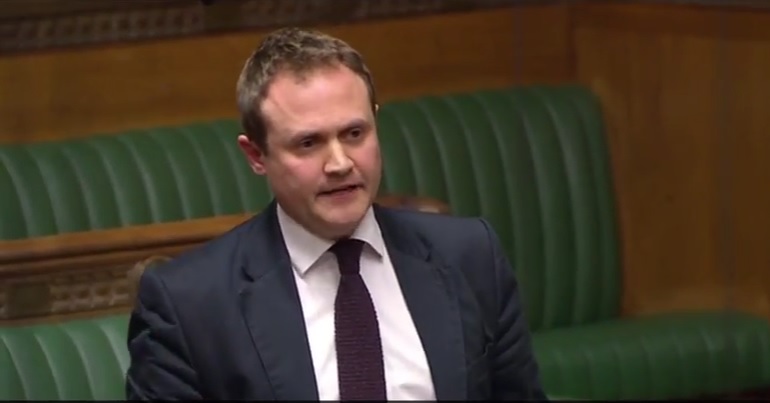 The UK’s foreign affairs select committee chair, and “rising star” of the Conservative government, spoke about potential military action in Syria with BBC Radio 4 on 12 April. And during the Today programme, Tom Tugendhat made an alarming revelation about the governing party’s thinking on whether to bomb the country.

The UK government is considering taking military action in Syria after an alleged chemical attack there. And Tugendhat spoke with the Today programme about whether Theresa May should secure a mandate from parliament to go ahead with bombing. The committee chair said May had the right to take action without a vote in parliament.

The Radio 4 host also asked Tugendhat about comments made by Julian Lewis, chair of the defence committee. He said Lewis has warned against the UK “embroiling” itself in a “military clash” with Russia. Tugendhat responded:

Well, I think he’s right. I don’t think we should embroil ourselves in a military clash with Russia. But I don’t think that that’s what anybody’s intending to do.

But the interviewer reminded Tugendhat that Russia has said it will respond to military action in the country by shooting down missiles. The committee chair responded by branding Russia a liar. The interviewer seized on this to direct Tugendhat back to the essence of his original question:

Are you saying when it came to a fight, then, that they wouldn’t actually do these things they’ve threatened to do?

We’re in serious trouble if Tugendhat’s thinking is representative of the government’s. Because he essentially told the BBC that, while he wouldn’t ‘intend’ to start a war with Russia over military action in Syria, he wouldn’t really focus on its potential response in making the decision.

In fact, he suggested that he wouldn’t even believe Russia if its officials categorically said ‘we’re going to nuke you out of existence if you drop that missile’. Because the committee chief said “Russia has lied continuously for much of the last five years”.

But given that Russia is the world’s second largest military power, we might want to put a bit of thought into what its response might be. And the fact that the government’s “rising star” – who’s the chair of a committee that’s meant to examine foreign policy decisions – doesn’t appear to get that is beyond alarming.