Bad news for the government: the fracking industry is being investigated for human rights violations - Canary 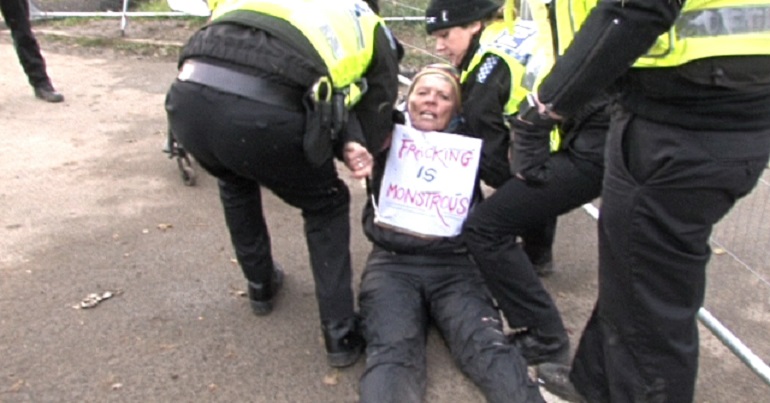 An influential international committee is investigating the entire fracking industry for possible human rights violations. The inquiry comes amid mounting concern about the viability and impact of the controversial industry.

An international spotlight on fracking

As DrillOrDrop reported, the Permanent Peoples’ Tribunal is an international body that was founded in the wake of the Vietnam war. It states that it investigates cases where “evidence suggests abridgement of basic rights of ordinary people”. The tribunal claims to act “independently of states, politics and vested interests” and follows international law. As DrillOrDrop noted:

One of the tribunal’s early cases involved the leak of toxic gas from the Union Carbide plant at Bhopal in 1984. More recent sessions have examined the massacre of Tamils in Sri Lanka, agrochemical transnational corporations and the activities of the Canadian mining industry in Latin America.

And now, the tribunal has turned its attention to fracking.

In session from 14 to 18 May, the tribunal will hear evidence from experts in the oil and gas industry, civil society and non-governmental organisations, and communities affected by fracking. It says:

People have well-documented concerns about fracking.

Aside from the obvious air pollution generated from burning fossil fuels, fracking (or the extraction of shale gas) is also controversial. Along with its contribution to greenhouse gas emissions, it has been linked to polluted drinking water and earthquakes. Studies have also shown links to low birth weights, premature births and a possible increased risk of breast cancer. All this has made fracking in the UK highly controversial.

As The Canary has documented, there are ongoing protests in the UK against fracking. At one site in north Yorkshire, campaigners have been prosecuted. At another, campaigners and local councillors have accused police and private security at the site of “disproportionate force” and trying to “provoke violence” – something both groups deny. Police at one point “dragged” Green Party co-leader Jonathan Bartley away from the site.

Adding weight to the argument

The Canary spoke to Bartley about the tribunal and its investigation. He said:

Fracking is dirty, dangerous and unnecessary. We know that drilling for gas places our climate targets out of reach, destroys local environments and risks contaminating local air, water and soil. I hope the devastating effect this industry has on people and our planet is reflected in the findings of the tribunal.

The challenge with any ruling by the Permanent Peoples’ Tribunal is that it isn’t legally binding. As we’ve repeatedly seen with UN investigations into the UK government’s “grave” and “systematic” violations of disabled people’s human rights, the government can just shrug its shoulders and ignore the charges made against it. So it remains to be seen what the tribunal will directly achieve. But indirectly, its findings may well add weight to the arguments against fracking. This could ultimately be crucial in seeing this dirty industry consigned to the dustbin of history.