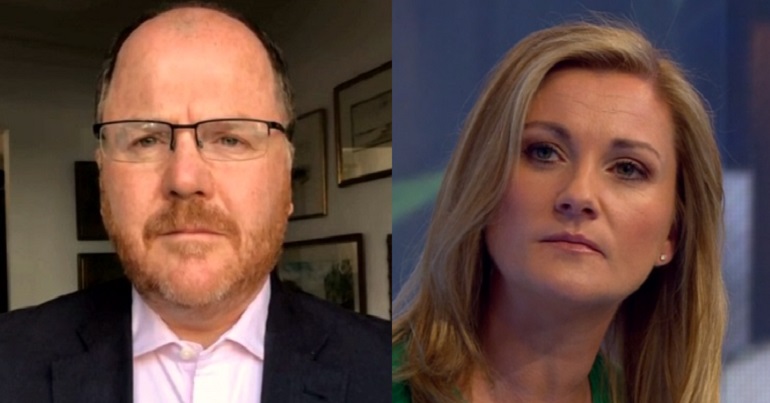 A Conservative MP was cut off during a live debate on the BBC‘s Victoria Derbyshire show on Monday 21 May. Not that some people would be concerned, as he was there to defend what many people think is indefensible: the denial of medical cannabis oil to treat seriously ill children.

The debate centred around the case of 11-year-old Billy Caldwell from County Tyrone, Northern Ireland. Billy lives with intractable and status epilepsy, which means that medication can’t control his seizures, nor can he ‘come out’ of them when they happen; doctors have to medically induce him to recover. Billy’s epilepsy is caused by a lesion on his left temporal lobe, which is inoperable. He was having anything up to 100 seizures a day.

So in April 2017 his GP in Northern Ireland prescribed Billy medical cannabis oil; the first time this has ever been done in the UK. The Times says [paywall] Billy’s GP, Dr Brendan O’Hare, gave him:

two unlicensed medicinal oils: cannabidiol, which is legal in the UK, and THCA, which is categorised as a class B drug [therefore, illegal].

Billy’s mother, Charlotte Caldwell, says the oil gradually reduced his seizures in length and quantity. But now, O’Hare claims [paywall] that the Home Office has written to him, “warning” him to stop prescribing the oil to Billy. He also claims [paywall] he was told by health officials in Northern Ireland not to prescribe the oil again. Billy now only has around three weeks supply of the oil left.

So Charlotte and Billy are on a UK-wide campaign trail to raise awareness of the benefits of medical cannabis oil, for its legalisation and also his situation. Speaking to Victoria Derbyshire, Charlotte said:

The government tried to say…

During the show, host Chloe Tilley tried to cut to Conservative MP George Freeman, presumably to give the government’s defence of not making medical cannabis oil legal. Unfortunately, only a few words came out of Freeman’s mouth before the connection dropped:

If Freeman had spoken, he may well have quoted the line the Home Office told to Belfast Live. It said:

This is a devolved matter. In Northern Ireland it is a matter for the Department of Health Northern Ireland to determine and consider any controlled drug licensing applications from companies and individuals.

The Home Office recognises that people with chronic pain and debilitating illnesses are looking to alleviate their symptoms. However, it is important that medicines are thoroughly tested to ensure they meet rigorous standards before being placed on the market, so that doctors and patients are assured of their efficacy, quality and safety.

So, the Home Office neither confirm nor deny it spoke to Billy’s GP. But his case is not the first high profile one of a child desperately needing access to medical cannabis oil. As The Canary has previously reported, Alfie Dingley’s case is very similar to Billy’s. Alfie’s mother made an emotional plea to the government on BBC Breakfast in February:

As Charlotte said on Victoria Derbyshire:

This is not about one child… I’m sick of it… I’ve had it up to my back teeth… I am taking calls for the last year from hundreds… of children, disabled, in their wheelchairs, suffering enormous amounts of seizures a day, being tube fed. Their mummies… crying on the phone… These children are dying in our country… And we now have to stand up here in the UK and say ‘enough is enough’.

The debate over medical cannabis is is becoming more and more prominent, and the government’s arguments continue to weaken. But as The Canary previously reported, there’s a distinct double standard at the heart of its stance on medical cannabis oil. This is because it grants licences for people to grow medical cannabis in the UK. The government then lets companies export it abroad to make treatments for childhood epilepsy.

Children like Billy and Alfie should have the best treatment available for them. If this is medical cannabis oil – then so be it. But the debate around the substance is much wider than just epilepsy. It is one that surely will be needed more and more, as the government continues to look hypocritical and out-of-touch.