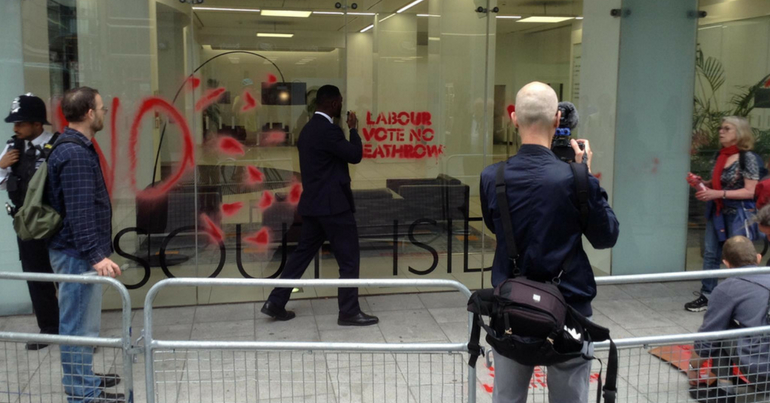 In a few weeks’ time, parliament will vote on whether to build a third runway at Heathrow airport. The plan got the go-ahead from the cabinet on 4 June, and the vote must take place within 21 days of that date. But it may prove to be a tricky issue for the Labour Party.

Environmental campaigners are calling on Jeremy Corbyn to impose a three-line whip ordering Labour MPs to vote against the expansion plans.

They’re backing up their call with civil disobedience and a hunger strike. On 4 June, eight people from campaign group Vote No Heathrow were arrested at Labour’s headquarters in London. Protesters spray-painted slogans against Heathrow expansion during the demonstration.

And on 9 June, group members will be starting a hunger strike outside the Labour HQ until the date of the parliamentary vote.

The Heathrow vote is likely to prove something of a headache for Corbyn. He has said that “the issue has to be looked at in the context of the [transport] select committee report”. He talks about four ‘tests’ in the report – economic impact, noise pollution, air pollution, and transport links – which must be passed before he gives the plans his support.

However, Corbyn does not appear to have a fundamental objection to airport expansion in general. His spokesman recently told HuffPost:

We’re in favour of airport expansion in the south-east, but it has to meet these four tests.

Shadow chancellor John McDonnell – whose constituency of Hayes and Harlington is under the Heathrow flightpath – is very clear where he stands. He is a longstanding opponent of Heathrow expansion and is reported to be working with rebel Tory MPs Justine Greening and Zac Goldsmith to oppose the plans. He reiterated his opposition on 5 June:

So that my constituents are fully aware I remain implacably opposed to expansion at Heathrow and after listening to the transport minister, Chris Grayling, today I am even more convinced that this would be a costly, environmental and social disaster that will never be built.

But while McDonnell is very much in the anti-camp, several big unions support expansion. Unite the Union, the GMB, TUC, Community, and BALPA, have all come out in support of the plans.

What about climate change?

In Corbyn’s statement about the four ‘tests’ which Heathrow expansion plans have to pass, he fails to mention climate change. Under the Climate Change Act 2008, the UK is required to reduce its climate emissions by 80% (from 1990 levels) by 2050. Building new runways anywhere in the country is likely to conflict with meeting this target.

A report [pdf] by Campaign for Better Transport into airport expansion in the south-east notes that the UK can only build a new runway and meet its climate change obligations if it takes serious steps to reduce demand for flying. It concludes [pdf p25]:

If a new runway is built in London or the South East, there are two overwhelmingly likely outcomes: either there would be a large increase in ticket prices, with flying consequently more centred on the wealthiest parts of the country; or the UK would fail to meet its emission targets.

Alex Thompson, spokesperson for Vote No Heathrow, told the Canary:

Catastrophic climate change is killing hundreds of thousands of people every year and yet, terrifyingly, it is absent from the discussion around expanding Heathrow, the place already emitting the most carbon dioxide in the country. A third runway will kill more people through hotter droughts and more powerful hurricanes, whilst helping a wealthy corporate elite pocket some government money and hop off more easily to their second homes.

The Labour Party must vote with its morals and enforce a No vote on the 3rd runway at Heathrow. We are launching a hunger strike to demonstrate the gravity of the situation and urge the Labour Party to whip its vote to oppose the Third runway. Labour: we’ve stopped eating, you stop Heathrow.

We will continue to pressure Labour until they agree to meet and impose a 3-line whip. We are going nowhere. Some unions’ positions are also worrying; they seem to have forgotten that ‘there is no work on a dead planet’.

In 2016, Corbyn suggested that whipping his MPs to vote against Heathrow expansion was unlikely to be successful. However, activists are going to make sure that Labour feels the pressure to do the right thing for the planet, and vote against a third runway.

It could turn out to be an uncomfortable time for Corbyn.