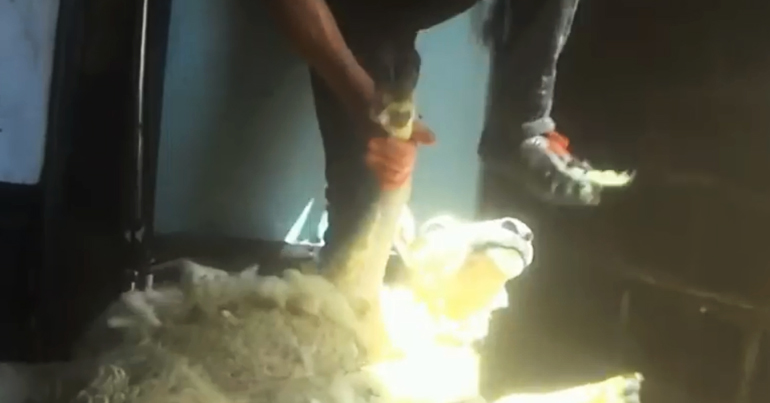 The video shows shearers punching and stamping on sheep, jabbing at their heads with electric clippers, and slamming the animals heads. PETA reportedly captured the footage over 15 days at 25 farms across Buckinghamshire, Hertfordshire, Suffolk, Essex, and Northumberland. The group says it saw similar behaviour “in every one” of these farms. And it also describes very poor health conditions in sheep:

Workers didn’t give sheep any pain relief before piercing their flesh with a needle… trying to sew up gaping, bloody wounds caused by rough shearing. Some animals were suffering from reported mastitis… prolapsed uteruses, and bloody hooves. The eyewitness never saw injured or sick sheep receive any veterinary care.

What’s shown in this footage clearly goes very much at the upper end of seriousness of anything that I’ve ever seen.

PETA said it has filed a 15-page complaint with the RSPCA, hoping the charity will launch an investigation that could lead to criminal charges.

Figures from the industry have distanced themselves from the footage. British Wool, which promotes and sells UK-produced wool abroad, said:

We are shocked and saddened by the behaviour of the (two) contractors filmed secretly.

As a farmer-owned organisation, British Wool collects and sells the wool on behalf of British farmers. We are passionate and committed to continuously seeking to improve shearing skills and good practice in the UK.

And farming industry news outlet AgriLand was quick to point out that:

an unfair depiction of the entire industry was given – with viewers urged to not buy wool products in general, in a clear agenda from the group. The actions of the shearers shown, however, remain unacceptable.

farmers and contractors within the sheep industry take animal welfare very seriously and any behaviour that is found to fall below that standard is not tolerated.

PETA said this is the “first-ever video exposé” of the British wool industry. But there have been claims of violent, abusive behaviour elsewhere. In 2014, PETA released video of shearers attacking and abusing sheep in Australia and the US. And in 2016, it released similar footage from two sheep farms in Chile.

The Australian wool industry reacted to the 2014 videos by condemning the violence. The Shearing Contractors Association of Australia “applauded” PETA for its investigation. It said the footage would be a wake-up call for the country’s industry. But in December 2017, new videos showed the same acts of violence still taking place in four shearing sheds across Australia.

We have done undercover investigations at more than 30 shearing sheds and farms across three continents. And what we saw in every single one of those investigations was sheep being mutilated and being abused.

This followed on from the chat show airing PETA’s 2014 Australian footage. NFU livestock board chairman Charles Sercombe responded to Allen on the show saying:

I can’t see how you can actually collate a few instances to it being widespread throughout the industry.

PETA has rightfully faced criticism for its insensitive marketing campaigns and other issues. But it has a long history of undercover investigations. And it’s been important in exposing some of the cruellest aspects of animal agriculture.

Problems with the system

I think really the whole wool industry needs to be held to account here. What we’re seeing is workers who are being paid piecemeal. So they are being paid to shear as many sheep as they can, as quickly as they can. And that, of course, results in the sorts of injuries that we’ve seen. And the industry is really at fault for using that model.

Recognising the underlying causes is essential. The British wool industry has been quick to distance itself from the individuals in PETA’s most recent footage. But as Australia’s experience has shown, nothing will change if an industry fails to tackle serious problems.

There is no excusing the cruel, disgusting actions individuals have carried out in the undercover footage. But the very structure of the industry enables it. And this is not just in the wool industry but throughout animal agriculture in general. As a result, farmed animals will continue facing violence until the system itself changes.

– Consider cutting animal products out of your diet and lifestyle. Not just food but materials such as wool and leather too. Read a brief primer by the Vegan Society on how to begin or continue taking those steps.

– Support charities actively campaigning against the worst parts of the UK animal industry including Viva! and Animal Aid.

– Read more about animal agriculture and animal rights at The Canary.