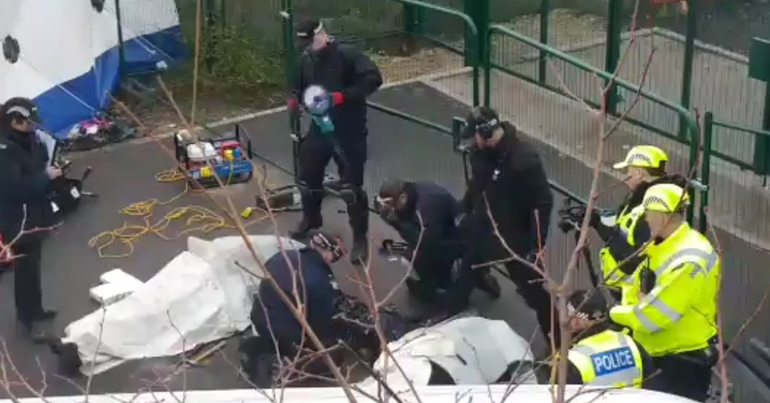 In a speech on 26 November, environment secretary Michael Gove admitted: “climate changes are inevitable”. As a result, the government is already planning for worst case scenarios. But Gove’s words came at the same time as police rounded up activists on the front line of climate action.

On 18 November, fracking well operator IGas announced it was ready to start building a rig for fracking at Tinker Lane, north Nottinghamshire. Acting on this news, two activists blockaded the Tinker Lane site with a lock-on during the morning of 23 November. Three days later, on 26 November, police cut the activists out of the lock-on.

Tinker Lane is subject both to a High Court injunction against protesting and to police restrictions on the location and time of protest. Past injunctions against protests by fracking companies have been described as attempts to “completely stifle” opposition. And the 26 November police response to the Tinker Lane lock-on has drawn similar criticism.

The ‘stifling’ of protest against IGas came on the same day Gove laid out the latest estimates of how the UK climate could change. Speaking at the Science Museum in London, the environment secretary said climate change is “inevitable”. And worst case scenarios such as a four-degree rise in temperature are already being taken into account when planning flood defences.

Gove said the UK has been a leader on climate change action. Greenhouse gas emissions have been cut by 42% since 1990. But he also admitted that rapid warming is attributable to “the methane, nitrous oxide, and fossil fuel emissions we produce”. Yet his speech, on the 10th anniversary of the Climate Change Act, didn’t mention fracking.

Shale gas is methane. Its extraction by fracking has been linked directly to climate chaos, including by ‘father of climate science’ James Hansen. In a letter quoted by the Guardian in October, Hansen attacked the UK government, saying:

And he said the pursuit of fracking would prevent the UK from achieving its climate obligations. It’s also worth noting that 2016 research linked nitrogen oxide to fracking through the supply chain.

Despite this, the government still claims fracking “could be an important part of our transition to a low carbon future”.

The three-day lock on at Tinker Lane is only the latest in ongoing protests against the site. Although less famous than the Preston New Road site in Lancashire, it’s an important threshold to defend against the advance of fracking.

On the one hand, Gove concluded his speech mentioning the “urgency of acting” against climate change. Yet on the other, the state continues to repress the UK’s front line of climate action. This hypocrisy is a reminder that we can’t rely on governments to defend the planet.