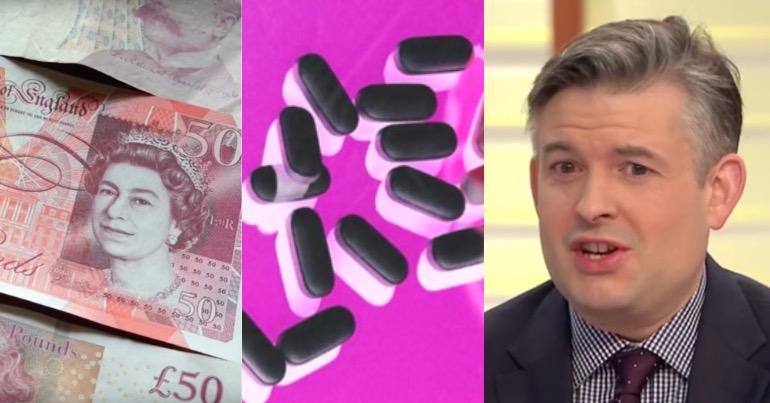 If you hold pharmaceutical companies to account, they run away. At least that’s the lesson learned by Labour’s shadow health secretary Jonathan Ashworth.

In an extraordinary moment, his planned meeting to discuss a drug company’s outrageous prices for the NHS was abruptly cancelled live on the BBC.

Ashworth appeared on the BBC‘s Victoria Derbyshire Live to discuss the difficulties faced by the NHS in negotiating a fair price for cystic fibrosis drugs. The issue gained publicity in August 2018 when an eight-year-old boy with the condition pleaded with Vertex Pharmaceuticals to lower its price. The US company, which specialises in cystic fibrosis, produces Orkambi, the drug he needs. Cystic fibrosis is a genetic disorder which affects the lungs as well as other organs. It increases the risk of developing other conditions and reduces life expectancy.

However, before Ashworth could begin, he received a message from Vertex cancelling the meeting:

This is how private drugs company @VertexPharma behaves when held to account by @UKLabour's shadow health secretary @JonAshworth – they just cancel the meeting. This is a company currently extorting our NHS to provide a drug for sick children pic.twitter.com/an3Pc1XdwL

Ashworth was due to meet people from Vertex to demand they make the drug available to the NHS. He claimed the company’s public affairs team said it was “unfair” that he’d announced this publicly.

But Ashworth wasn’t done, and used the opportunity to send this message directly to the company:

The pharmaceutical company refusing a fair price for a life changing drug for cystic fibrosis patients has cancelled my meeting with them.

I wanted to find a resolution.

Did Vertex cancel because of Ashworth’s profit criticisms?

On 10 February, Ashworth criticised the company’s profits, saying patients would be “disgusted”. As the Guardian reported:

the company has posted a 40% increase in revenues for the last quarter of 2018, with records suggesting it has around £2.3bn in the bank.

Moreover, this profit increase was reported to be a direct consequence of revenues from its cystic fibrosis drugs. In response to this Ashworth said:

Those living with cystic fibrosis who are currently denied this life-saving drug will be disgusted at these profits. This big pharma firm, by refusing to play fair with the NHS, is holding lives to ransom. The price they want for Orkambi is simply unjust.

I’m meeting Vertex bosses on Monday and will demand a fairer deal. If they refuse to budge, ministers should step in and use what means they have to ensure an affordable version of Orkambi is available for those who need it.

Asking the NHS for sickening amounts of money

This controversy unfolded due to the refusal of Vertex to accept an offer from the NHS worth £500m over five years. The company prices the drug at £104,000 per patient per year. As around 5,000 people would benefit from Orkambi, that would mean a bill to the NHS of over £500m per year. This huge cost has been criticised by the National Institute for Health and Care Excellence, which considers it not good value for money. And the story is similar in other countries, with Orkambi costing £207,000 per person per year in the USA and £146,000 in Canada.

The pricing is all the more disgraceful considering the drug was developed through funding from “a cystic fibrosis charity and taxpayers’ money from the National Institutes of Health in the US”. In short, public money.

Big Pharma companies often say that drugs “need” to be expensive to fund research. What they don’t tell you is that they use *publicly-funded research* for expensive, privatized drugs.

This week on Oversight, @RoKhanna and I exposed how this scheme works:pic.twitter.com/ELbllU3Fxy

Time to use the full force of law against drug companies

In his appeal to the company after the unceremonious cancellation of his meeting, Ashworth warned that:

if you do not do this, if you don’t take up the NHS’s very very generous offer, there are people saying they should intervene by using some legislation about the patents and so on.

According to the Guardian, the 1977 Patent Act means that “the state can effectively override a patent in the national interest”. As it stands, owning a private drug patent allows companies to charge huge sums to access their so-called “intellectual property“. Instead, the government could compensate the company less and could produce a generic replica version of the drug at a far lower cost. Dr Andrew Hill of the University of Liverpool, for example, told the Guardian that he estimates a generic version of Orkambi could be made for a “maximum” of £5,000 for a year’s supply – that’s £99,000 cheaper.

Joy, a Vice President in our Boston office, talks about how accessible and approachable the Vertex executive team is to all employees. Learn more about working at Vertex: https://t.co/9nEwJjYUHN #GreatPlacetoWork pic.twitter.com/uhxuQtjlGD

It’s just a shame that, when it comes to fairly priced ‘access’ to its own drugs, it doesn’t apply the same philosophy. And so it’s time to use the full force of the law against such companies and put people’s health before profit.