When is a woman not a woman? When bureaucrats say so. - Canary 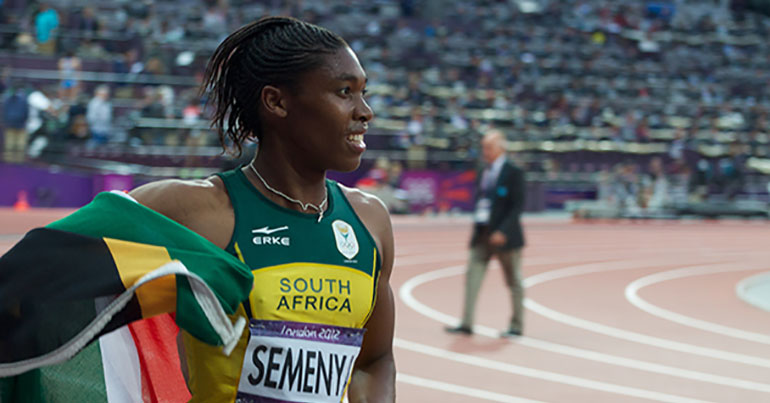 Women athletes competing in 400m to 1-mile races will have to prove their testosterone levels are within the ‘normal’ range, from next week. This comes after South African runner, Caster Semenya, had her appeal rejected by the Court of Arbitration for Sport (CAS) on 1 May.

The International Association of Athletics Federations ordered Semenya to take a ‘gender test’ in 2009 when she was 18. Her position, competing alongside other women, remains uncertain.

Semenya’s true gender is subject to speculation; she has never revealed the reason for her elevated testosterone levels. Some say that she was born with an intersex condition.

Intersex people have characteristics of both male and female, biologically speaking. Sometimes they are said to have “disorders of sexual development” but this is considered offensive by many – intersex people are generally perfectly healthy. Their chromosomes (XX for female, XY for male, and variations such as XXY or XO), hormones, ovaries / testes, and genitals may be different to most men or women. If a female-bodied person has increased testosterone, she may also have greater muscle mass and bone density.

What this ruling means is that intersex women will be able to compete but only if they take medicine to reduce their testosterone levels. There are exceptions, including some people with Androgen Insensitivity Syndrome (AIS). A person with AIS has XY chromosomes but their body cannot respond to testosterone and so they look female on the outside. Crucially, people with AIS have none of the athletic advantages of bone and muscle development that testosterone can bring.

Should bureaucrats be allowed to question someone’s biological sex and/or gender identity under any circumstances?

Unfortunately, there are many questions that remain unanswered. CAS stated in its press release that it found the rules “discriminatory” but “necessary”. It also expressed concerns as to how these rules would be applied in practice.

Prof Peter Sonksen, member of the Society for Endocrinology and Emeritus Professor at St Thomas’ Hospital, told The Canary:

The decision is marginally scientifically correct, and in my opinion wrong. Although it is based on evidence, the interpretation of that evidence is subjective and liable to bias. For example, who defines and decides what a material androgenising effect actually is? The ruling does make matters clearer for women with disorders of sexual development in future but is a separate issue to transgender women in sport.

Perhaps it’s time to shake up the whole idea of binary sexes in sport… and in life.