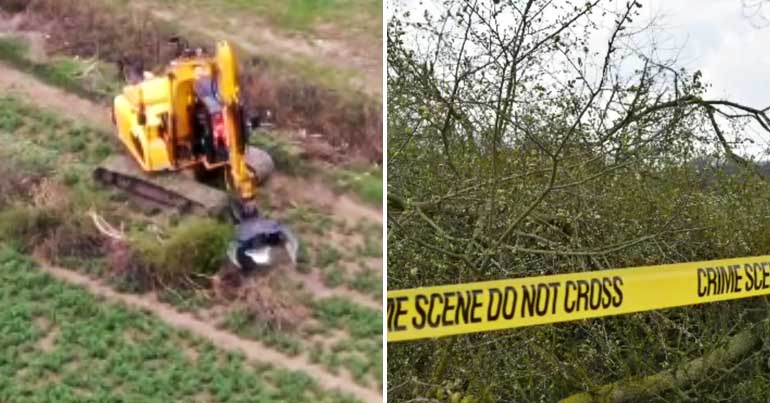 A contractor working on high-speed rail link HS2 has removed vehicles, including a tree-felling machine nicknamed the “Climate Changer”, from its Buckinghamshire compound. Campaigners against the project claimed it was the result of “peaceful direct action”.

“We aim to stay here indefinitely”

HS2 contractor Fusion had planned to uproot 200 acres of trees and hedgerows near the village of Steeple Claydon, Buckinghamshire. Locals and campaigners against HS2 have opposed the “vegetation clearance” work since they began in February. Anti-HS2 SOC (Save Our Countryside) delivered a petition opposing the clearance works to HS2 director Mark Thurston on 20 March. More than 2,500 people signed the petition, which said residents were “seriously aggrieved” by the work. There were also protests in nearby Calvert Green by residents and councillors against the work.

On 31 March, the Telegraph reported that:

Despite this, Fusion began ground clearing on 11 April. National campaign group Stop HS2 said that, as a result, activists declared the site a ‘crime scene’ after 200 metres of hedgerow were removed. It also noted that this was happening during birds’ nesting season, which led to concerns over the discovery of a nest in one of the hedges that was removed.

HS2 was also criticised in early April for netting hedgerows in Quainton, just a few miles from Steeple Claydon. Conservationists and wildlife advocates have widely condemned netting for preventing birds from nesting as well as potentially trapping and killing other wildlife.

We’re here to slow down the [vegetation clearance] work. We’re not here to cause any violence or anything, it’s a peaceful protest. We aim to stay here indefinitely.

Anti-HS2 SOC remained at the site and claimed to have stopped the clearance work on multiple occasions. Then, on 8 May, the group claimed victory after it reported the “Climate Changer”, a nickname for one of Fusion’s vehicles, was removed from Fusion’s work depot. Stop HS2 said:

on 7th May, when contractors tried to use the machine for the last time… a worker asked “You’re just going to stand in front of us wherever we go, aren’t you?”, and when he was told yes, they returned to the compound, after which the machinery was loaded onto lorries and the compound closed down.

The group claimed Fusion’s departure was a victory for “peaceful direct action”. Mahon, who stood in front of the “Climate Changer”, said:

I believe the site has been shut down. We’ve won the battle but we haven’t yet won the war.

The Canary contacted Fusion for comment but hadn’t received a reply at the time of publishing.

The latest victory comes after tree-sitting protesters prevented work on a section of HS2 in west London. On 27 April, activists from Stop HS2, the Green Party, and Extinction Rebellion spent 10 hours in trees at Colne Valley Park. The Guardian said this action successfully prevented the felling of 16 mature trees. And they carried out the action despite transport minister Chris Grayling being granted an injunction against eight other protesters in February.

Environmentalists have criticised HS2’s harmful impact since before its earliest days. And people have remained fiercely opposed to the project, regularly engaging in direct action to prevent or delay sections of the line being constructed. These latest victories are a reminder that everyone can fight for the things they believe in. And also that we can win those battles.