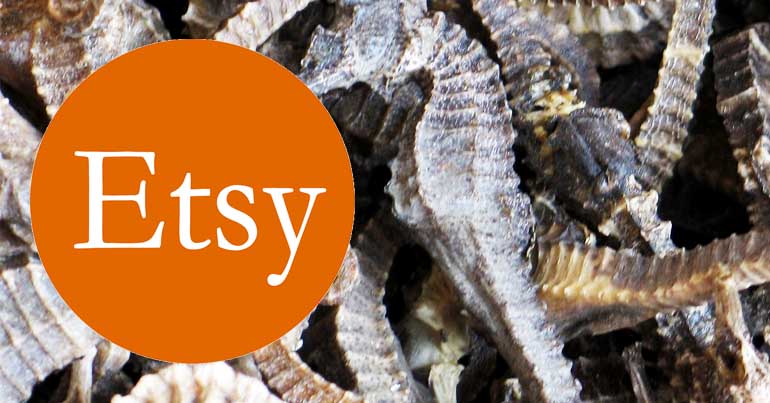 Sellers on handmade items marketplace Etsy are dealing in seahorses, which are threatened worldwide. And despite repeated attempts by seahorse conservationists to limit sales, the website has refused to co-operate.

The Convention on International Trade in Endangered Species (CITES) put seahorses on its list in 2004. It said at the time that seahorses were:

the first commercially valuable marine genus to be protected under [CITES]. A number of the world’s species of seahorses are threatened because of overfishing and unsustainable trade.

Little has changed since then. In 2017, the International Union for Conservation of Nature (IUCN) said that “almost 15% of seahorse assessed… will be soon threatened with extinction” if current trends don’t change. It reiterated fishing and trade as two of the biggest drivers behind population decline.

At present, seahorses are listed on CITES Appendix II. That means governments must license exporters before they can sell the animal. But a UK-based charity insists authorities aren’t properly enforcing these regulations.

The Seahorse Trust is leading a campaign to “stop the marine curio trade”. A University of California study collected data on fishing vessel bycatch from 22 countries. The results, it said in 2017, show that about 37 million seahorses were caught every year. Many end up in the medicines trade. But jewellery makers and other craftspeople also make use of a significant number. They then sell their items on platforms such as Etsy, which hosts a wide range of real seahorse items, including listings for medicinal use.

Curios also use seahorses that come from sources other than bycatch. In fact, the Seahorse Trust told The Canary that traders kill more than 150 million creatures every year just to serve the worldwide trade. Many of these come from legally-operating seahorse farms, though knowing the source of any one seahorse can be almost impossible.

However, seller information may not always be correct, either by ignorance or intent. Tami Weiss, a seahorse wrangler from Wisconsin, USA, told iNews in 2017 that there are three types of seahorse sellers:

Those that are intentionally being deceptive about whether or not they’re illegal, those that don’t know and don’t care, and those that say they’re legally farmed but are lying.

The Canary asked the Seahorse Trust about seahorses that allegedly come from Florida. It said:

Everyone quotes the sourced seahorses from Florida and even if that was possible, it does not get away from CITES on the export.

Whether from seahorse farms or fishing bycatch, traders use the same grim method to create curio-suitable seahorses. A Seahorse Trust campaign video explains that:

Once collected, the seahorses are then dried out… which is the equivalent of putting a human into a boiling hot bath and watching them slowly die. During this process, the smaller ones they’re intending for use in the curio trade are pinned into shape so that they can show ‘natural’ postures.

Traders repeat this cruel act on millions of seahorses.

Bulk sales of seahorse are readily searchable online. One seller at online marketplace Aquafind, for example, advertises an “average export capacity of 2,500 Kg per month”. 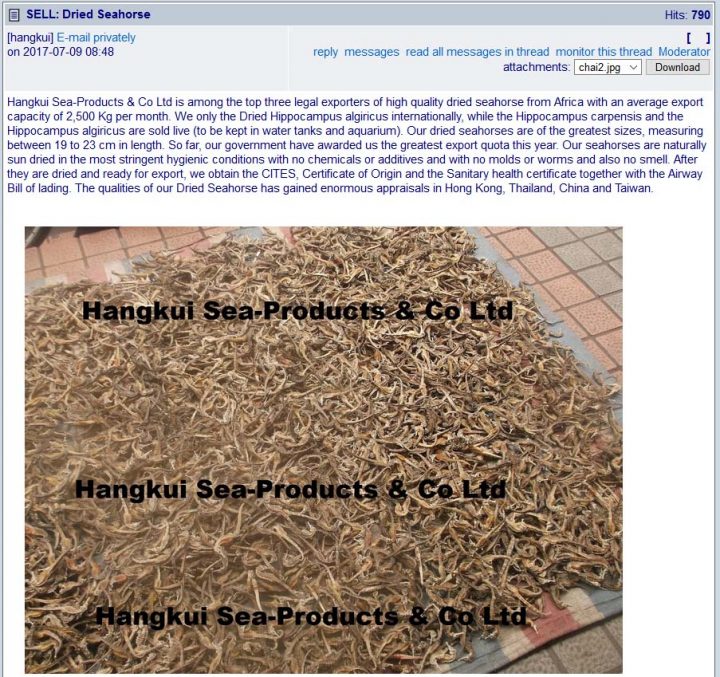 For comparison, a 2002 study estimated the average dry weight of an adult from one seahorse species to be around 3.7g. It would take more than 675,000 of these seahorses to weigh 2,500kg.

Another website, Ox Cattle Gallstones, lists 14cm seahorses for sale at 100 to 300 bodies per kg. The advert also says that the “minimum order… is 50kg”, and claims to have 18,000kg available. 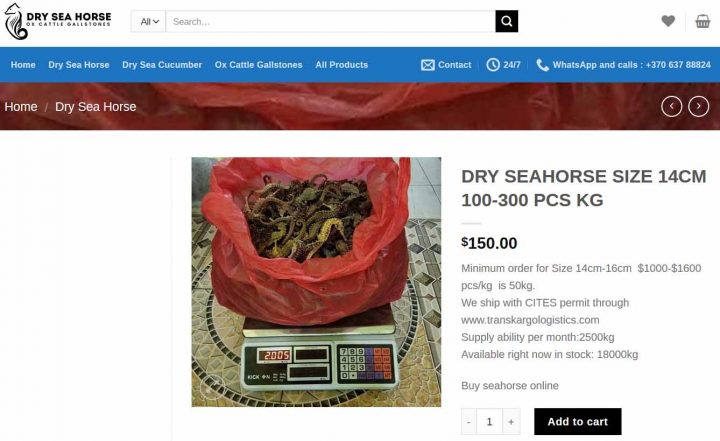 Although both adverts state the sellers have CITES certification to sell, the Seahorse Trust pointed out that just the advertised volumes alone are alarming. “At this rate, seahorses will be extinct in 25 to 30 years,” it said.

Sellers used to be able to push their products across many major internet platforms. However, the Seahorse Trust has had success in clamping down on the trade. The group told The Canary that it:

has been successful in getting Amazon, Ebay, Preloved, Schpock and Alibaba to remove any seahorse listings we inform them of.

It’s even getting somewhere with Facebook. In June, head of the Seahorse Trust Neil Garrick-Maidment, posted that the group had made “great headway” in meetings with two senior Facebook officials. Garrick-Maidment said Facebook would “look into every sale we report to them from their site” while the company draws up an action plan to combat the issue site-wide. However, some pages remain active at the time of publishing.

Despite other companies recognising the problem, Etsy hasn’t taken any action. Both the Times and iNews reported on this in 2017 but there’s been no progress since then. The Seahorse Trust said:

For nearly two years we have been emailing and trying to meet with Etsy to discuss and virtually every email (even to their legal team and CEO) is ignored or just a standard response sent.

The Seahorse Trust even approached Etsy with a petition signed by nearly 55,000 people. It said that Etsy issued a template response and “never commented any more. People who emailed them got standard responses. In the end they stopped responding at all”.

When The Canary approached Etsy with questions about CITES-listed seahorses on its website, it gave the same standard response. An Etsy spokesperson said the website is “very careful” about policies, and that it faces particular challenges because it’s “one global marketplace instead of a separate marketplace for each country”. The spokesperson also pointed out that it “proactively [removes] ESA and CITES Appendix I species from our marketplace”. But the spokesperson said:

Seahorses fall under CITES Appendix II, which means that they are not endangered, but some jurisdictions require sellers to obtain permits in order to sell them. While we do not monitor CITES Appendix II species, we will remove listings reported to us by a government agency in jurisdictions where their sale is prohibited. … as we are not qualified to make decisions about the classification of endangered species, we will continue to rely on the CITES Appendix I (as well as compliance with local law) in our policy enforcement.

The spokesperson then suggested lobbying CITES to move seahorses to Appendix I.

Although Appendix II animals aren’t endangered, CITES explicitly states that an export permit from a state authority is required. However, Etsy won’t audit its own marketplace even if users report listings. Instead, it said that it relies on “government agents to identify any listings that violate local laws” before removing items.

It is astonishing that Etsy don’t treat Appendix II species the same as App I – they are listed by CITES for a reason, ie, they are endangered or vulnerable, otherwise they wouldn’t be on the list.

The Canary also asked Etsy why it hadn’t even agreed to meet with the Seahorse Trust. However, it only said it isn’t “able to provide any more information at this time”.

Etsy needs to step up

Seahorses native to the UK are protected by the Wildlife and Countryside Act. But a globalised digital marketplace makes state enforcement of imports difficult. In December 2018, then-agriculture minister George Eustice said UK border officials had seized just 14 packages containing seahorses in the past year. Moreover, courts haven’t successfully convicted someone for seahorse trading since 2014. And most of these were of seahorses used in medicine.

It’s essential, then, that Etsy takes responsibility for what is sold on its own website. Other websites have. Rather than hide behind the claim that seahorses aren’t technically endangered, Etsy needs to step up now and recognise the precarious position these beautiful and unusual animals are in.