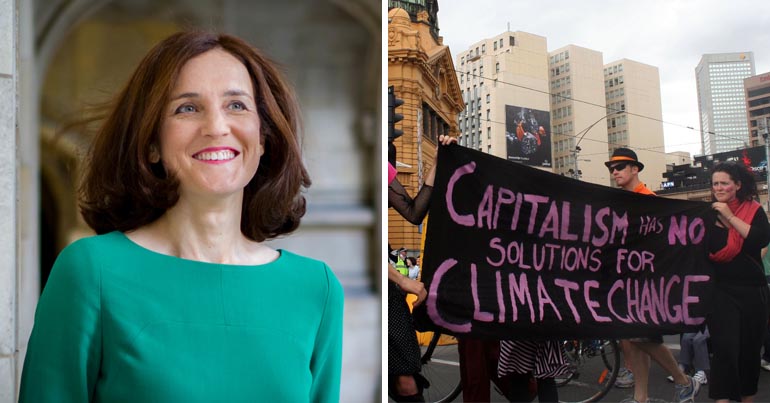 Boris Johnson has appointed former Northern Ireland secretary Theresa Villiers to his cabinet. Johnson handed Villiers the environment secretary post, which Michael Gove vacated. She appears to have some redeeming environmental views, specifically on animals. But scratching below the surface reveals a logic that’s perfectly in line with the rest of the cabinet.

Most notably, Villiers has been loud and clear in her opposition to live exports. This practice sees farmed animals such as cows and sheep carried in cramped lorries across huge distances, often spending hours in sweltering conditions. Villiers is also against repealing the Hunting Act, supports an end to factory farming, and has spoken out against farrowing crates.

At first glance, Villiers continues the allegedly ‘progressive’ stance that Gove took during his term in the post. But, as with Gove, digging down suggests her actions are motivated by reasons other than care for non-human animals.

One clue appears in Villiers reason for supporting the ban on hunting. She said the underlying reason for her opposition is that:

I haven’t seen any convincing evidence that the ban on hunting has caused the job losses and economic damage some feared that it would.

This refers to claims by pro-hunting groups before the ban that the move would cause thousands of job losses. She has also been outspoken in her support for culling badgers whilst blaming the EU for ‘prohibiting’ a vaccination for cattle. The farming industry widely supports the cull because of the “economic impact” of bovine TB and the belief that badgers are key to the disease’s spread.

Prioritising economics puts Villiers’ animal welfare views in line with her attitude towards the environment and wider society. She responded in 2015 to concerns about her support for fracking by talking about ‘safety standards’, and briefly mentions “benefits to society as a whole”. However, fracking is environmentally destructive and support for the industry is based on perceived economic benefits. This is also true of other projects that Villiers has supported such as HS2 and the eventually-abandoned forest sell-off.

Villiers’ stance is a belief in state-guided private profit. And this becomes explicitly clear in her positions on human and social issues, such as voting to reduce corporation tax, for academisation, and for cuts to benefits.

This position puts Villiers in step with the rest of Johnson’s cabinet.

Mat Hope, editor of climate news website DeSmog UK asked if Johnson’s new appointments make up the “least climate-friendly cabinet ever”. He then went on to lay out the front bench’s relationship with the environment. For example, he pointed out that leader of the commons Jacob Rees-Mogg is a climate crisis ‘denier’, and chancellor Sajid Javid permitted fracking projects. Business secretary Andrea Leadsom questioned climate breakdown and foreign secretary Dominic Raab has voted against efforts to curb carbon emissions.

Crucially, many in the new cabinet have links to the ‘Tufton Street Network‘. This collection of thinktanks and campaign groups seeks, in part, to limit environmental regulations that supposedly harm profits.

Former prime minister Theresa May’s appointment of Gove as environment secretary was an effort at greenwashing. Gove, like Villiers, was driven by a belief in putting profitable business at the heart of policy. And this same belief undermines Villiers even where she has some apparently positive points of view.

Capitalism is detrimental to a healthy planet. And Johnson’s new cabinet looks set to accelerate us down the path of destruction. We must get rid of them as soon as possible.