Grouse shooters had a terrible first day of the season, thanks to Labour and saboteurs - Canary 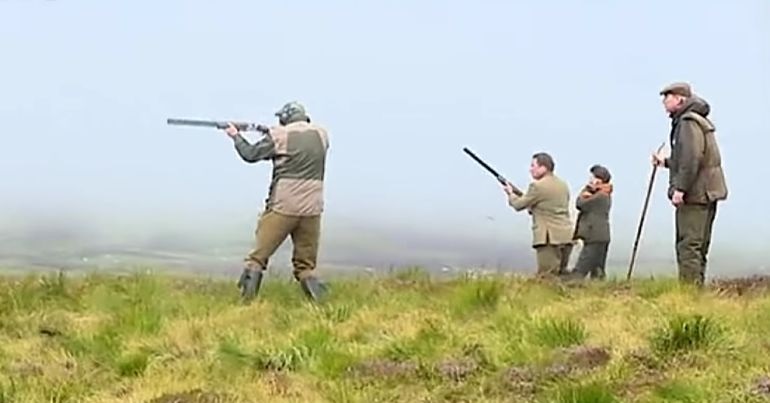 The grouse shooting season began, as always, on the 12 August. Hunters refer to the day as the “Glorious Twelfth” which starts a four-month-long shooting spree of the wild birds.

Happy #GloriousTwelfth! We wish all our members and supporters a great and memorable season.

But the hunters’ big day wasn’t as “glorious” as they’d probably hoped. Because hunt saboteurs forced some shoots to pack up early. And the Labour Party called for a review into the practice, which it also promised to launch when in government, should the current government refuse.

Driven grouse shooting is damaging to a lot more than the wild birds targeted by the guns. As The Canary has previously reported, animals that prey on grouse are culled – sometimes illegally – to make sure the only threat the grouse face is from humans willing to pay for the kill. In preparation for the shoots, landowners also drain, dry, and even burn moors – destroying much of the wildlife that calls those areas home.

For example, a 2018 report titled The Case for Reforming Scotland’s Driven Grouse Moors alleged that almost 38,000 mountain hares were killed on grouse moors in 2017, reducing the population to less than 1% of its level 65 years ago.

Needless to say, the burning of land isn’t particularly helping the climate emergency either. Despite all this, as Labour points out:

the ten largest English grouse moors are paid more than £3 million in farm subsidies every year.

Not so glorious now

That’s why hunt saboteurs were out across the country on the 12 August. They announced their numerous successes shutting hunts down on social media:

BREAKING: Saboteurs have just located a grouse shoot at Upper Snailsden Moss in the Northern Peaks and are closing in to shut the shoot down. #glorious12th pic.twitter.com/c9ygFOX1Gh

…and not a shot was fired!

First catch of the day. No more shooting for you lot. @HuntSabs pic.twitter.com/UNCCYdeobd

**BREAKING**
Its the opening day of the Glorious Twelvth and sabs have taken to The Northern Peaks in huge numbers and have already shut down one shoot! #sabsonshoots #glorious12th pic.twitter.com/iglZMIbc8H

The time has come

Labour also took the opportunity to let shooters know that this ‘Glorious Twelfth’ could very well be their last, if the party gets into government.

Labour is calling on the current government to review the practice. It’s demanding the economic and environmental impact of the ‘sport’ be examined, along with consideration of viable alternatives. It says the next Labour government will launch such a review, if Boris Johnson’s government refuses.

The costs of grouse shooting on our environment and wildlife needs to be to properly weighed up against the benefit of land owners profiting from shooting parties.

For too long the Tories have bent the knee to land owners and it’s our environment and our people who pay the price.

There are viable alternatives to grouse shooting such as simulated shooting and wildlife tourism. The time has come for a proper review into the practice.

Into the history books

Given that we are in a climate breakdown, weighing up whether there’s more value in protecting our wild spaces – and the life in them – than giving a few tweed-clad folk the chance to run around a moor shooting birds with a gun is a no brainer.

This ‘sport’ belongs in the history books. As does any political party that doesn’t get what a simple calculation that is.