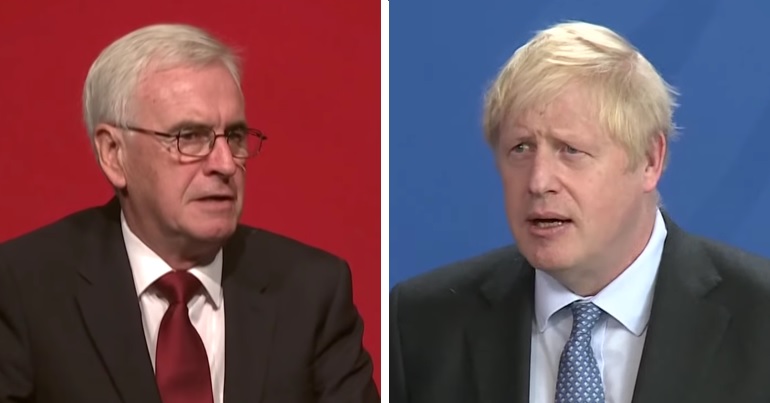 If parliament tries to topple the government over no-deal Brexit, Boris Johnson is apparently planning to call a “people v politicians” general election. In that contest, Johnson and his team will aim to convince the electorate they’re on the people’s side and that the opposition, such as Labour, are ‘with the politicians’.

But John McDonnell just scuppered that argument for Johnson’s government. Because he just backed the ‘people’ in court. And in doing so, he effectively backed 85% of the British public.

Three Extinction Rebellion activists faced charges of obstructing a highway, obstructing police, and breaches of the Public Order Act 1986 during climate protests. They were found guilty of public order offences on 22 August but discharged by the judge on the condition they do not reoffend within the next year.

As the Guardian reported, McDonnell made a statement in support of the activists. Read out in court, McDonnell’s statement said:

The shadow chancellor said his party’s policies had developed as a result of Extinction Rebellion’s actions. He also asserted that MPs value peaceful assemblies as part of the “grassroots, informal democracy that complements the formal processes of parliament”.

McDonnell’s defence of climate activism came as the Evening Standard released the results of its latest poll. Conducted by Ipsos MORI, the poll found that 85% of British adults are now concerned about the warming climate. Furthermore, the number of people “very concerned” about climate breakdown leapt to 52%. As the Evening Standard noted, these are record highs.

Extinction Rebellion’s activism will likely have played a part in the awareness of the climate emergency for some of those polled. The unusually sweltering British weather may have too. But the effects of the climate catastrophe are now so keenly felt around the world, it’s hard to avoid coming across them on a daily basis: wildfires in the US and Canada, the Arctic alight, blazes all over the Amazon (thanks to Brazil’s heinous president), droughts in India, further food insecurity in the global south, the list goes on and on.

That’s why people are sitting up and taking notice.

So on ‘whose’ side our representatives stand on the climate issue is paramount. The Tory government, throughout the last nine years, has stood firmly on the side of politicians and big business; it has prioritised short-term gain for the elites over the future of civilisation. Under Jeremy Corbyn, Labour has stood with the people. McDonnell’s statement to court is the latest example of that.

Clearly then, in a contest of ‘people vs politicians’ on the matter of climate collapse, Johnson doesn’t have a hope in hell of winning. No wonder that’s not the one he plans to run.