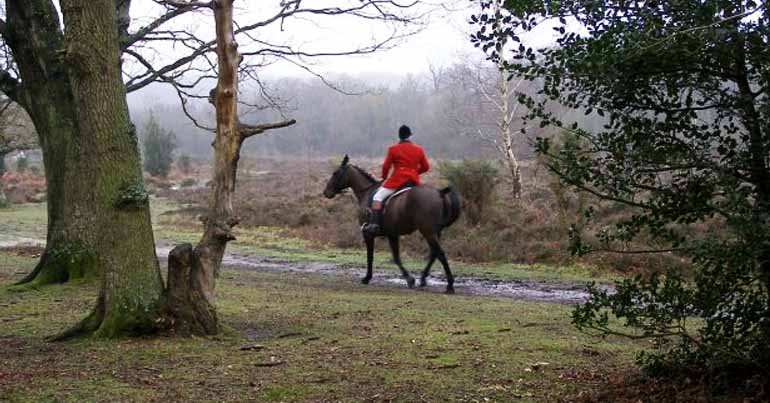 England’s largest public land owner has started publishing details of hunting on its land. In doing so, it follows on from the country’s largest private land owner. And campaigners say the move is a ‘welcome change’.

Forestry England recently announced it will begin publishing details of hunts using its land. It said that the decision came after “Some visitors… told us that they might want to avoid woodlands during trail hunts”. However, campaigners have also pressured Forestry England for greater transparency on hunting for some time. As a result, they have welcomed the announcement.

Jack Riggall, a member of anti-hunting group Cheshire Monitors who has engaged the Forestry Commission (of which Forestry England is a part) in dialogue on the issue, told The Canary:

Freedom of information requests revealed that Forestry England suspended a meet of the Staintondale Hunt while it investigated the death of a fox at Sneaton Forest. However, Forestry England said there was “inconclusive evidence” about how it was killed.

After public outcry over hunting on its estates, the National Trust began publishing details of hunts on its land. Riggall pointed out that there could be parallels in the wake of Forestry England’s decision:

When the National Trust chose to do this in August 2017, the amount of hunts applying for licences dropped by more than half, for the obvious reason that they couldn’t face scrutiny and didn’t want their crimes exposing.

If Forestry England’s publishing of details has the same impact, more than a dozen hunts could choose not to apply for licences. Documents seen by The Canary show Forestry England licensed 36 foxhound, harrier, and beagle packs between September 2018 and February 2019. This resulted in more than 200 individual meets during the hunting season. Forestry England is also responsible for a huge amount of land. It runs 215,000 hectares of certified woodland and is the country’s largest public land manger.

At the time of publishing, Forestry England had published dates and meet locations for one hunt: the New Forest Hounds.

Forestry England’s announcement came as a surprise to campaigners. Riggall called for such a move on 22 August. And anti-hunting groups were asking the public to sign a petition demanding the Forestry Commission publish hunting dates as recently as 1 September. Such a sudden change of heart could be a good sign. Although it’s worth noting that the National Trust doesn’t allow terriermen on its land. Forestry England is yet to commit to such a policy. Both bodies lag behind the Woodland Trust, which has an outright ban on hunting.