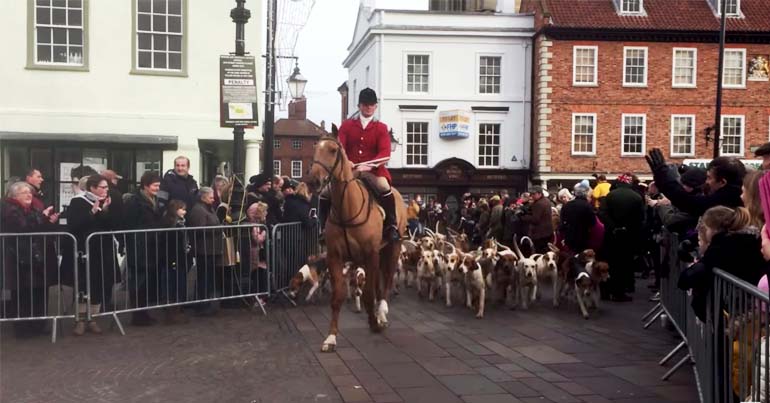 A Nottinghamshire council has kicked a hunt from its land. And it’s the latest in a string of councils waking up to the horrors of hunting.

“The most appalling thing”

Newark Town Council has banned South Notts Hunt from parading through the town on New Year’s Day 2020. On 20 September, Newark Advertiser reported that the council’s finance and general purposes committee voted to stop the “traditional” 1 January meet, which took place every year in the market place. The newspaper quoted Gill Dawn, deputy leader and chair of the committee, as saying:

The hunt is the most appalling thing to happen, encouraging people to abuse animals and dress up and drink.

However Kate Cressey, master of South Notts Hunt, claimed on Facebook that the hunt still plans to meet in Newark on New Year’s Day.

Anti-hunting groups and other members of the public celebrated the news on Twitter:

Fantastic news, thanks to the hard work of Deputy Leader and Chairman of #Newark Town Council, Mrs Gill Dawn

Tetbury Town Council banned the Duke of Beaufort Hunt from meeting in the town for its 2018 Boxing Day meet. And locals reportedly “forced” the East Kent with West Street Hunt out of Elham in 2018.

The Canary also reported on a petition by Grantham Against Bloodsports to stop the Belvoir Hunt meeting in Grantham. This led to the hunt moving its meet to another location in the town. However, the campaign didn’t end there. Independent councillor Virginia Moran will bring a motion on 26 September for South Kesteven District Council to completely “sever all ties” with the Belvoir Hunt. Grantham Against Bloodsports said it “wholeheartedly welcomes & supports this Council motion”.

Councils across the country are starting to respond to residents’ concerns about supporting vile activities like hunting. As the dominoes begin to fall, hunts are finding themselves with fewer and fewer ‘safe spaces’. And it shows that everyone can play a part in grinding down this abhorrent pastime.