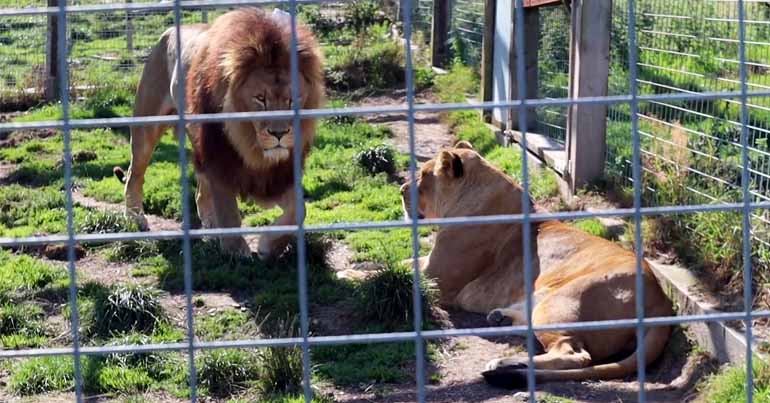 A North Wales council ordered Borth Wild Animal Kingdom to close its dangerous animals exhibit after breaching its licence. But an animal rights campaign group is calling for the whole place to be shut down because of the zoo’s “repeated failings”.

On 28 January, Ceredigion County Council told Borth Wild Animal Kingdom to shut down “the enclosures of its most dangerous animals”. The council said Borth zoo had “inadequate firearms arrangements” in the event any of its animals escaped. The zoo has 28 days from the date of the direction to appeal. However, it’s not the first time that the council has penalised Borth Wild Animal Kingdom over its dangerous animals exhibit.

A lynx named Lillith escaped from the zoo in October 2017. A marksman eventually killed her after she was found at a local caravan site. This led to the council imposing a dangerous animals, or category one, ban on the establishment. But it reversed this ban in July 2018 after the zoo agreed to bring in a “qualified, competent manager”.

In issuing its latest ban, an official for Ceredigion County Council said “the direction was served reluctantly” after council staff had “worked closely with the zoo to help them comply with the conditions of their licence”. Owner Tracy Tweedy told the Times that it planned to resolve the issues “in the next couple of days”. However, an animal rights campaign group says the council’s move doesn’t go far enough.

Following news of Borth Wild Animal Kingdom’s latest ban, Freedom For Animals published an open letter to Ceredigion County Council. It claims that the zoo has failed more than just its commitments to public safety from category one animals. It highlights:

Other deaths at the zoo include Dana the squirrel monkey, whom one of the zoo’s former keepers said was found “lying in her blood and faeces”. The same keeper claimed Mrs Grivet, an African green monkey, died after the zoo kept her in a cold enclosure. A rat-infested aviary also allegedly led to the disappearance of a parakeet.

The Canary approached Borth Wild Animal Kingdom. A spokesperson said it is unable to comment at this time.

Further calls to close the zoo

It’s not the first time campaigners have called for an end to Borth Wild Animal Kingdom. Following Lillith’s escape and killing, Lynx UK Trust called for the zoo to be shut down. The Born Free Foundation echoed this statement.

Zoos are seriously problematic at the best of times. But zoos consistently prone to ‘accidental’ deaths must be held to account, as in the case of Cumbria’s South Lakes Safari zoo. And if the people charged with caring for them are incapable of doing so, then it’s time to move on.