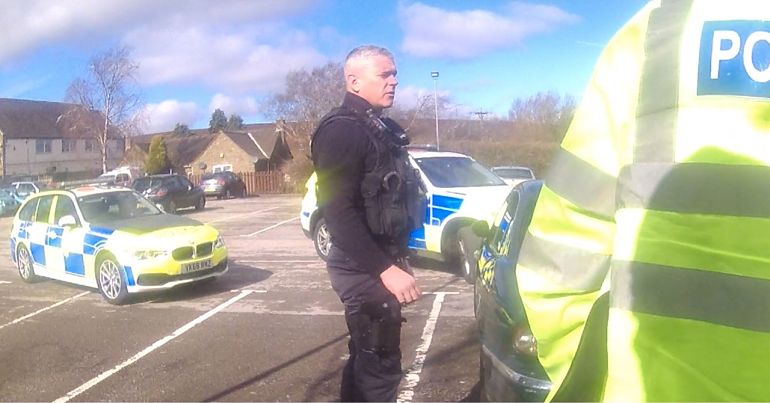 Derby Hunt Saboteurs said that on “Unlucky Friday 13th” March, police including firearms officers pulled over vehicles associated with saboteurs. The group says the police held those present “for a considerable amount of time” while arresting two saboteurs. Anti-hunting group Locals Against the Barlow Hunt, which was present at the time, claimed the sabs were arrested for “suspected harassment”. However, Derbyshire Police later de-arrested both people without charge.

However, Derbyshire Police told The Canary that the armed response was coincidental:

We were called to reports of people in vehicles acting suspiciously outside a property in Holmesfield. Because of the nature of the report, we sent several units to the scene. We will always dispatch the nearest units, who were armed officers in this instance.

Two people were initially arrested but as the situation de-escalated, they were de-arrested.

On 16 December 2019, Derby Hunt Saboteurs published information about Operation Trek. They said Operation Trek is “an operation with the Hunts to get rid of protesters” and that it had started in 2014. Meanwhile, Staffordshire Hunt Saboteurs described it as an “anti-sab operation”. On the other hand, a social media post by the police described Operation Trek as “an intelligence led approach to the deployment of police resources” for hunting-related incidents in Derbyshire:

Other recent hunting-related police call-outs include the Barlow Hunt’s New Year’s Day meet mentioned in the above Facebook post. A freedom of information request revealed the event involved 15 police vehicles and cost the force £15,856. Staffordshire Hunt Saboteurs also claimed four Derbyshire Police vehicles pre-emptively pulled their car over for nearly an hour in December 2019. And the group reported another apparently spurious stop on 7 January 2020.

In its statement, Derbyshire Police said it provides a “proportionate policing response”. But these experiences suggest anti-hunting activists receive the sharp end of the stick while the local hunts appear to act with relative impunity. In fact, a bizarre post on Derbyshire Rural Crime Team’s Facebook page on 17 October 2019 appears to scold sabs for not co-operating. But is that a surprise given the treatment police often give to hunt saboteurs?

It may also be worth noting a recent post by Locals Against the Barlow Hunt. The group pointed out that two senior members of the hunt have close connections to the police and legal system. Mark Davies, current chair and former joint master of the Barlow Hunt, is a senior immigration judge. And his wife, Joan Williams, is presently joint master of the hunt and previously a superintendent of South Yorkshire Police.

This isn’t the only recent case of firearms officers turning up to arrest sabs. On 26 February, six Avon and Somerset Police vehicles including armed officers arrested a member of Mendip Hunt Sabs. SomersetLive said it came after an ultimately false allegation of a sab carrying a handgun. It also said police “believed the call to have been malicious”. Staffordshire Hunt Saboteurs claim to have experienced stops by armed officers from Staffordshire Police three times and West Mercia Police once during the 2019/20 hunting season.

Locals Against the Barlow Hunt highlighted two posts on Facebook apparently showing pro-hunt individuals recommending people make similar malicious calls. This appears to be an increasingly common occurrence. And it will continue until police start using “intelligence led” approaches, recognising such calls for the “malicious” acts they are.