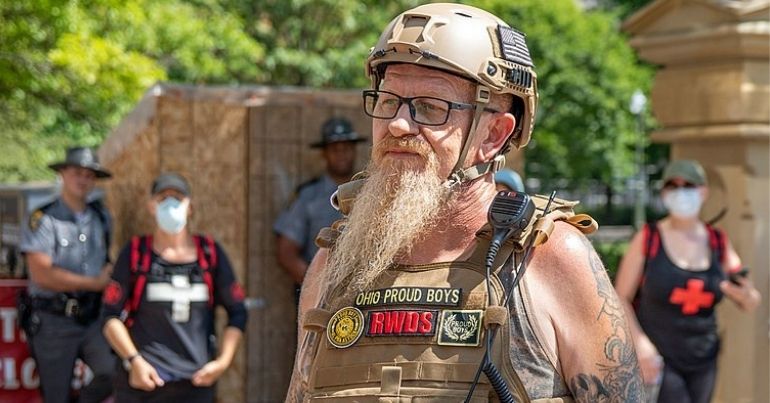 In the wake of the far-right invasion of Washington’s Capitol Hill on 6 January, the US Department of Homeland Security (DHS) has issued a bulletin warning that more violence is possible. The news comes ahead of the release of a new documentary on the neo-Nazi movement in Germany.

While no specific threat was named, the DHS bulletin appears to confirm fears that the Capitol riot, in which five people died, could embolden the US far-right.

In the bulletin, DHS said it believed unrest:

will persist in the weeks following the successful Presidential Inauguration. Information suggests that some ideologically-motivated violent extremists with objections to the exercise of governmental authority and the presidential transition, as well as other perceived grievances fueled by false narratives, could continue to mobilize to incite or commit violence.

An Associated Press article on the announcement quoted former George W. Bush-era homeland security director Michael Chertoff. Chertoff told reporters that deaths from far-right terrorism now exceeded those from jihadist groups in the US, warning that:

But it’s not just the US facing a threat from the far-right. Europe has also seen a rise in incidences of fascist violence, a topic explored in a new documentary film about resurgent neo-Nazi aggression in Germany.

The Enemy Within: Neo Nazis and The German State, produced by Redfish Media, maps the resurgence of fascist violence in Germany and, critically, allegations of collusion by the authorities.

Today Acting Secretary Pekoske issued a National Terrorism Advisory System (NTAS) Bulletin: https://t.co/e1vnghZulO. There is currently a heightened threat environment across the U.S. that is likely to persist over the coming weeks.

It focuses partly on the alleged killing of nine people – mostly from migrant backgrounds – at a shisha bar in Hanau, near Frankfurt, in February 2020 by a far-right extremist Tobias Rathjen. The suspect and his mother were later found dead due to gunshot wounds.

It features extensive interviews with leading fascist figures, researchers, and victims of far-right violence as well as analysing the growing influence of Germany’s far-right party Alternative for Germany and the presence of far-right cells in the Germany military.

The film is due to be released in February.

It seems that even with the defeat of one reactionary Donald Trump, the far-right remains a threat to people all over the world.