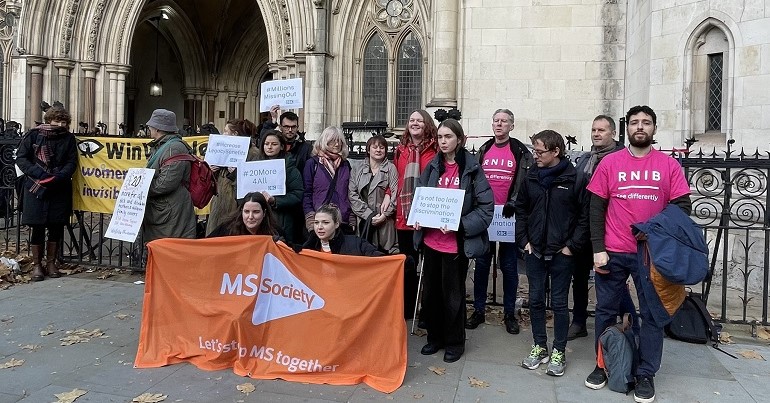 The Department for Work and Pensions (DWP) was once again back in court on Wednesday 7 December. Chronically ill and disabled claimants brought an appeal involving the department’s failures during the coronavirus (Covid-19) pandemic. However, the bigger point here is that the DWP is back in court again – after years of countless legal challenges to it and its policies.

DWP: back in court over the pandemic

The Canary previously reported on this legal challenge to the DWP:

During the pandemic, the DWP increased Universal Credit by £20-a-week. But it did not do the same for people on so-called legacy benefits. This included social security like Employment and Support Allowance (ESA).

Several claimants brought a court case against the department over the issue. Represented by solicitors including Osbornes Law, the claimants argued that the DWP paying extra money to some people and not others was discriminatory – specifically against disabled people.

In November 2021, a court looked at the claimants’ case – and dismissed it in favour of the DWP.

However, the claimants weren’t having it – and brought an appeal to the Court of Appeal on 7 December.

If successful, the case could be worth up to £1,500 to every legacy benefit claimant. The court livestreamed the appeal, which you can watch by clicking through to YouTube here.

Before the appeal, chronically ill, disabled, and non-working people, and their allies held a vigil outside the court:

The activist known as Ben Claimant was there:

Over 2.4 million people on legacy benefits were stopped from getting the £20 by @DWP during lockdown.

We're now outside the Court of Appeal calling for people on older legacy benefits to receive a backdated payment to right the discrimination they've suffered.#20MoreForAll pic.twitter.com/e1tDIyYHlE

He told the Big Issue:

Since 2010 we have lost out through austerity, benefit freezes, increased conditionality and benefit sanctions. We’ve had our public services taken away and we’ve been demonised by politicians through the media. Not getting the £20 added insult to all those injuries. If we win this appeal then it will mean so much to millions of people. It would be a huge result for us.

One of the claimants who brought the case against the DWP sent out an update out on social media:

UPDATE: The court in the #LegacyBenefits case has now ended, with the judges reserving judgment. We will be notified of their decision in due course.

Difficult to say how it will go, or when we will get the decision. I will update again ASAP. Thanks to everyone for your support.

However, this appeal is not the first of its kind for the department.

Claimants have been forced to take the DWP to court numerous times in recent years. Invariably, these cases have seen people fighting for their basic rights. Paula Peters is an activist with campaign group Disabled People Against Cuts (DPAC). She has been to many DWP court cases over the years, and was at 7 December’s appeal:

She told the Canary:

I stood there feeling incredibly angry, exhausted, burnt out, that from 12 years of fighting the government and DWP to save our most basic human rights. There we were again to seek justice what we are rightfully entitled to, knowing deep inside we would be back there again at some point fighting once more. It’s deliberate by the DWP, to inflict the maximum distress, suffering and hardship and discriminate against us all.

But despite the exhaustion, I had a renewed determination, that no matter what comes next, as disabled activists, we will continue to resist this pernicious government and fight back with everything we’ve got. That feeling was renewed amongst everyone at the vigil: that we will continue the fight for social justice, our human rights and continue to get the truth out there on the horrendous impact of austerity, the pandemic and the cost of living that’s claimed countless disabled peoples lives.

The Canary has witnessed first hand in recent years chronically ill and disabled people, and non-working social security claimants, having to fight the DWP – the government department charged with allegedly supporting their welfare. It’s perverse that they have to battle the department for their fundamental rights in the first place. However, this is indicative of a system where their treatment as second-class citizens is entrenched – and 7 December’s appeal, simply by the fact it was needed in the first place, shows little will change any time soon.