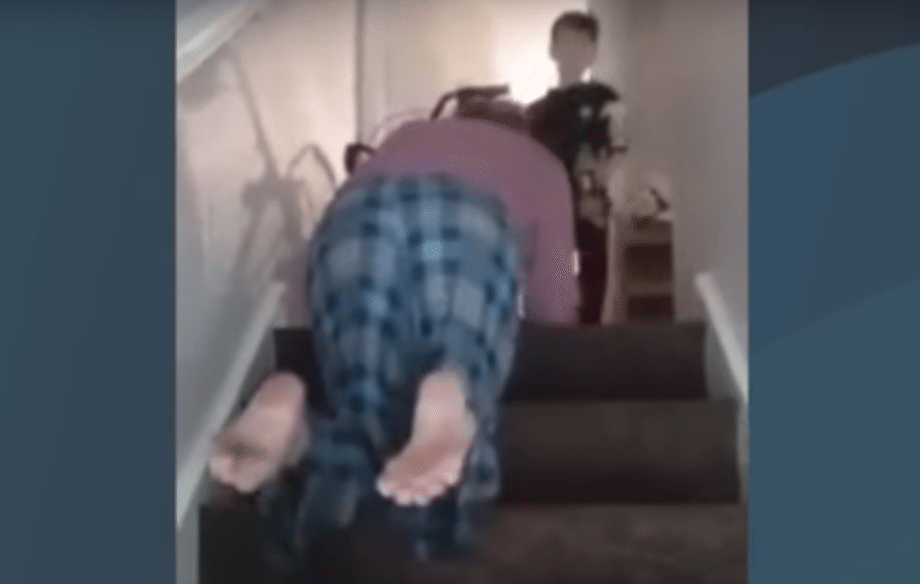 A desperate woman was left with nowhere else to turn after her disabled dad was denied a stairlift by her local council – so she posted a video of him on Facebook crawling up the stairs in the hope that the public reaction will help bring about the support her family needs. So far the video has received more than 32,000 hits.

Lucy Fraser of Dundee has lived with her 73-year-old father Gordon – who suffers from a neurological illness called torsion dystonia – since his wife passed away. The condition causes painful muscle contractions, which severely limit his movement and speech. Sufferers often need round-the-clock care with even basic activities such as washing, shopping and in some cases eating.

However, savage cuts to local care budgets, as well as cuts to personal independence payments nationally that would have otherwise given this family more freedom to make adequate home modifications, have meant Lucy and Gordon have been unable to get the help they so urgently need.

Lucy received a visit from an occupational therapist to assess her dad’s complex care needs, but the specialist working on behalf of the council decided the property couldn’t be fitted with a stairlift. She was told it could potentially pose a health and safety issue for her 10 year old son, who also lives in the house. However, no other recommendations were made and they have since been left without any official support.

The stairs are a big problem — my dad has already fallen three times on them since January and done bad damage to his leg. We had occupational therapy in to carry out an assessment and my dad was refused a stair-lift and a walk-in shower. I don’t think elderly and disabled people get treated the way they should.

Since the video went live and press have contacted Dundee City Council, a council spokesperson has said:

We will be contacting the family directly to discuss their situation with them and to listen to their concerns. Council officers will help to find the best and most appropriate ways to support the family.

Gordon’s plight drew a particularly strong response in his hometown of Dundee, including from local charity fundraiser Charlie Kean. Charlie decided to take matters into his own hands, obtained a stairlift and delivered it to Gordon’s house. After it was installed, Lucy said:

Dad is over the moon. He had a little cry after Charlie left.

While this outpouring of community support is extremely heartening, it doesn’t cover up the shortcomings of a welfare state eviscerated by the Conservatives’ deadly ‘Austerity’ policies. No one should have to struggle through their daily life in the way Gordon Fraser has, but at least his tenacity has proven inspirational, his daughter Lucy has shown how social media can quickly rally people to a cause and Charlie Kean has personified the good that still persists in communities up and down the country.

Do you live in Dundee? Get in touch with your MP and let them know how unacceptable this is.