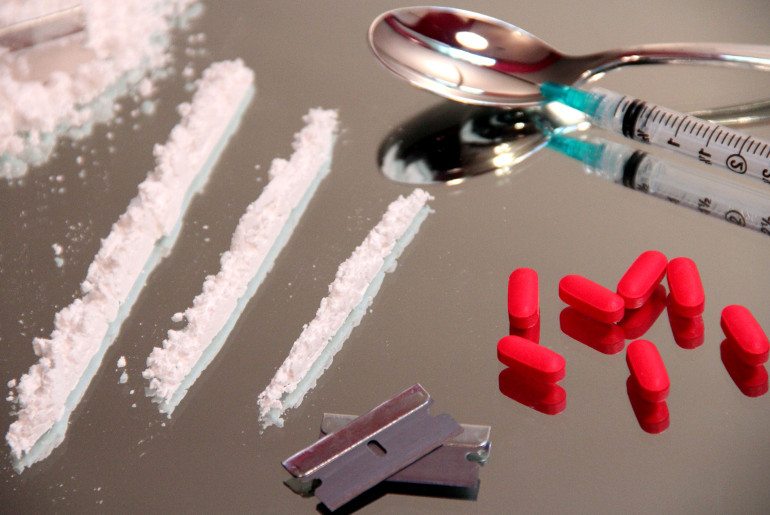 Drug users in the UK currently face a double whammy when they use illicit substances. Their health can be damaged by the drugs, and if caught they can be fined and jailed. The Royal Society for Public Health (RSPH) and the Faculty of Public Health have decided that maybe drug users need help rather than punishment. They have released a report called ‘Taking a New Line on Drugs‘ suggesting a more logical approach by the authorities to drug use in the UK.

The report argues that it is time to move on from the ineffective war on drugs and take a different approach. They propose that instead of criminalising and alienating whole sections of our society by prosecuting drug use, we should treat the problem as a health issue and offer users support in controlling or stopping. Dr Fiona Sim, Chair of the Royal Society for Public Health, says:

Drugs policy discourse throughout the 20th century was dominated by the mantra that drug use is a criminal activity, rather than a health issue. However, despite an approach centred around prohibition and law enforcement, this policy has failed to curtail demand or supply, or reduce the harm that drugs cause…

This report seeks to explore a different approach to drug policy by setting out how we can move away from viewing drug use through an ideological lens and instead take an evidence-based approach aimed at improving and protecting the public’s health and wellbeing.

Michael Moore would no doubt approve of the move to decriminalise drugs. In his new movie ‘Where to Invade Next’ he stages a mock invasion of Portugal in order to ‘steal’ the policy of drug decriminalisation, so he can bring it back home to the US. Moore appeared on the Late Show in the US, which showed a clip from the film where he interviews two Portrugese police officers. Moore went on to explain that nobody had been arrested for drug use in Portugal for 15 years, and that drug use and drug related crime had also decreased.

The police in the UK are also open to a move towards decriminalisation of drugs. The Police and Crime Commissioner of Durham Constabulary, Ron Hogg says:

I believe that vulnerable people should be supported to change their lifestyles and break their habits rather than face criminal prosecution, at great expense to themselves and to society.

The current problems for drug users and society

Currently, drug users who develop a drug problem are offered little help, with rehabilitation programmes being hard to come by. Alcohol users also have limited access to rehab programmes.  Although alcohol is socially accepted, it is deemed to be one of the most damaging drugs there is, both to individuals and society.

The criminal justice system in the UK is under considerable strain due to overcrowded prisons and cuts to the legal aid system. The report cites drug offences as major part of this. There were 155,832 drug offences in England and Wales in 2015, but this figure does not include theft and other offences where drugs were an influence.

The Prison Reform Trust stated that 9% of prisoners, in England and Wales, were committed due to drugs offences in 2014, and the current prison population for England and Wales stands at 85,185. So a ballpark figure for the current number of prisoners in jail due to drug offences is 7,667 prisoners. That is a lot of people who are wasting a chunk of their life in prison, resulting in strained or broken relationships and a life hampered by a criminal record for many years after release.

Drug decriminalisation success in other countries

The report says the current UK strategy of reducing demand, restricting supply and building recovery in communities is not working. And this is backed up by a public opinion survey results presented which show only 25% believe the UK alcohol and drug policy is effective in reducing harm.

The Netherlands, Canada and Switzerland are held up as examples of countries where drug harm reduction policies have worked. Portugal’s success with decriminalisation and a reorientation of resources to harm reduction and health promotion is also covered, including:

• Problem drug use has declined in 15-24 year olds.
• Deaths due to drug use have fallen significantly, from 80 in 2001 to 16 in 2012.
• Cases of hepatitis C and B have both fallen in the drug using population.
• Overall levels of drug use are now below the European average.
• Social costs, including both indirect health costs and direct costs associated with the legal system, have fallen by 18%.

I fully support the recommendations in this report. The current government approach of blindly prosecuting drug users, rather than trying to reduce the rising tide of drug harms, particularly deaths from alcohol, heroin and cocaine, in fact leads to more damage to individuals and society – and more costs to the taxpayer.

Maybe it was predictable that the UK government’s response to this report would not be postive, as Home Office spokesman was reported to say:

The UK’s approach on drugs remains clear – we must prevent drug use in our communities and support people dependent on drugs through treatment and recovery. At the same time, we have to stop the supply of illegal drugs and tackle the organised crime behind the drugs trade.

The Home Office spokesman was also reported to say that there has been a drop in drug misuse over the last decade. While this may be true it misleads the reader into thinking that this is a declining problem. There has been a rising trend in adult illicit drug use since 2013, with a particularly strong rise in the 16 to 24-year-old age group, as illustrated in the Drug Misuse Survey (page 2).

The RSPH report claims that the reduction in drug use over the last decade has been mainly due to a reduction in cannabis use, whereas some Class A drug use has actually increased. The death rate associated with illegal drug use has more than doubled in the past twenty years, standing 39.9 deaths per million population in 2014, the report states.

The alternative strategy to drugs policy proposed involves: placing emphasis on supporting the public’s health, reducing harm from drugs, improved drug education and moving away from criminalising users. Considering the UK’s current drugs policy is not working, the government would do well to consider these proposals rather than falling back on dogmatic principles that have blighted the lives of many.