The government claims to care about pensioners. But they will suffer the most when the latest NHS axe falls 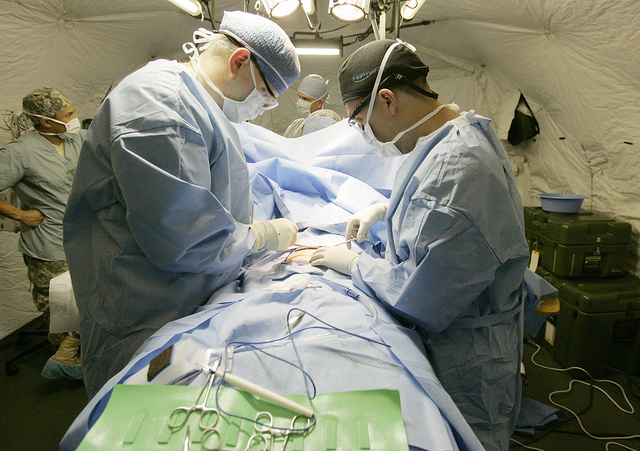 NHS England has ‘waved the white flag’ on its operation targets. Under new proposals, elderly patients could wait “unacceptably long” for non-urgent treatment. Hailed as “missing” a promise, NHS England has come under fire for pushing care to the private sector. And axing waiting times is just another symptom of a service on its last legs.

Trading one service for another

Changes announced by NHS England CEO Simon Stevens will see current waiting time targets abandoned. Currently, any patients requiring non-urgent operations are promised treatment within 18 weeks of diagnosis. Although admirable in its aims, the system is not perfect. Over the last year, targets have been missed, with 10.1% of hospital trusts failing to deliver. However, there will be no attempt to fix the growing problem, quite the opposite. The new plan guarantees further misery, diverting funds elsewhere.

Speaking about the changes, Stevens told the BBC’s Today Programme:

The reality is that there are pressures right across the health service… It’s right that we start with the most urgent and pressing problems.

Although Steven’s approach seems logical, no comfort is found for patients. Stevens has promised a trade-off for quicker cancer diagnosis and A&E care. but failed to comment on how. The government has come under increasing attack for underfunding the health service, playing games with lives to save pennies.

Achieving one delivery promise only by missing another is a textbook example of rationing access to care. It should not be happening in today’s NHS.

Worse still, it may not provide the funds to back its claims. Emergency experts are sceptical, with Emergency Medicine President Taj Hassan dismissing such claims as “strange”. He told The Canary on Twitter:

If EM [Emergency Medicine] care is going to b[e] prioritised over elective care, proper workforce planning is what is needed… [I’m] Not sure ED [Emergency Department] got any real money. What we need is investment in the workforce.

The most vulnerable will suffer the most

New proposals have come under fire from patient groups, doctors and charities. Elderly patients, who make up the majority of NHS work, “will wait longer and in more pain” said Clare Marx of The Royal College of Surgeons. And Shadow Health Secretary Jonathan Ashworth said, “It will mean many elderly people waiting in discomfort and pain for hip replacements”.

Some believe that Steven’s motives are sinister. Fears of a deliberate move to private care are rife.  Dr Aislinn Macklin-Doherty, cancer specialist trainee and head of the Junior Doctors Alliance, expressed greater fears. Speaking to The Canary, she said:

It is very clear there is a trajectory of travel planned to eliminate the NHS. This decision is just another symptom.

Her fears echo those of many front line staff, who blame increasing privatisation and budget cuts for a failing service. Those cuts land at the feet of the government.

When one looks at the trend of what has happened in the NHS over the last decade: less money being put in, more money being wasted on outsourcing. Tragically it is the most vulnerable, the elderly and those in the lowest socioeconomic groups that will suffer the most.

With little funding and failing services, the government seems utterly incompetent. And with elderly people are now at clear risk of long-term pain, Stevens walks a thin line. Empty promises and closed wallets may suit the Downing Street ledger, but patients will suffer.  Axing waiting times will force people to seek private care elsewhere, while the national system struggles with scarce resources. NHS England grossly underestimates funding needs and misunderstands the complexity of medicine, or at least appears to. The truth may be much darker, with NHS England betraying those it swears to protect.

It may be that Macklin-Doherty is right, and this move is a deliberate attempt to push care into the private sector. If she is, then it is sick and poor people that will suffer the most.

Support The Canary if you appreciate the work we do. For the price of a coffee.