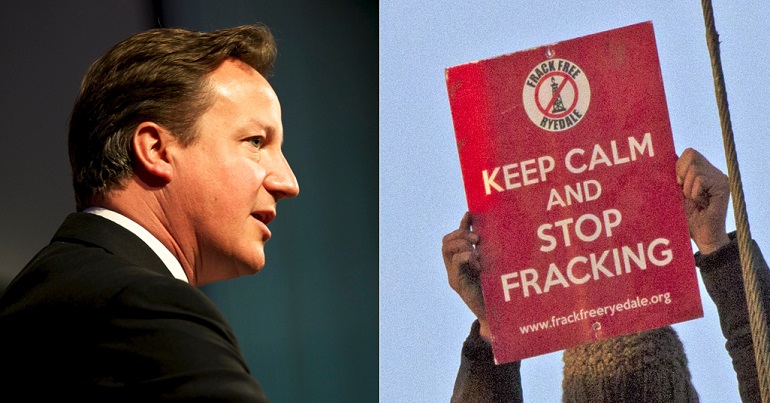 Former prime minister David Cameron has used a US speech to endorse the UK’s shale gas industry, also known as ‘fracking’. But campaigners have hit back at what one called his “cringe-worthy” and “desperate” PR attempts.

In the UK, there are currently dozens of sites with either planning permission or permission pending for fracking. According to the British Geological Survey, fracking is when:

A mixture of water, chemicals and sand is pumped… along the borehole and through the perforations that fracture the shale. The water opens up cracks in the rock, and the sand grains lodge into the spaces and keep them open, allowing the released gas to flow out of the rocks and to travel back up the borehole casing.

has the potential to provide the UK with greater energy security, growth and jobs. We are encouraging safe and environmentally sound exploration to determine this potential.

But opponents of it have numerous concerns including polluted drinking water, earthquakes, and its contribution to greenhouse gas emissions. So Cameron’s intervention into the debate has sparked controversy.

As S&P Global Platts reported, Cameron was the keynote speaker at the American Fuel and Petrochemicals Manufacturers annual conference in San Antonio on Tuesday 27 March. He said:

Speaking of the large number of fracking wells in the US compared with the UK and Europe, he said that Britain risked ‘falling behind’ other countries, and that fracking was needed to make the UK “more competitive, more energy independent, less reliant on Russian gas”.

We passed the laws, changed the planning rules, talked to the companies, changed the regulations, set out the bonuses communities would stand to get if wells went ahead, but it was painfully slow and incredibly frustrating… The green movements have become absolutely obsessed… so they are just opposed to fracking, come what may.

Yes, we will do it because there is so much in our national interest, it just may take some time.

But campaigners have hit back. Claire Stephenson from the group Frack Free Lancashire told The Canary:

It’s quite perturbing to see Cameron openly lobbying for the flailing UK fracking industry. Let’s not forget that this was a man who, in a cringe-worthy and desperate PR attempt, hugged a husky on a glacier in Norway to boost his green credentials. Several years later, he was said to have told his aides to ‘get rid of the green crap’.

Worryingly, Cameron also admits to directly facilitating his mates in the fracking industry. He stated that: ‘we passed the laws, changed the planning rules, talked to the companies, changed the regulations…’ What kind of bent democracy is he happy to be part of? He then mentions the busted myth of the UK’s reliance on Russian gas imports. The UK government confirmed only last week these were less than just 1%.

Mr Cameron seems rooted in backwards values on climate change and fossil fuels. And he is very out of step with current scientific research. Fossil fuels will become stranded assets as we transition to a low-carbon economy.

Fracking is not a viable energy source for the UK and nor will it ever be. Renewable energy is our only option for a clean, green future.