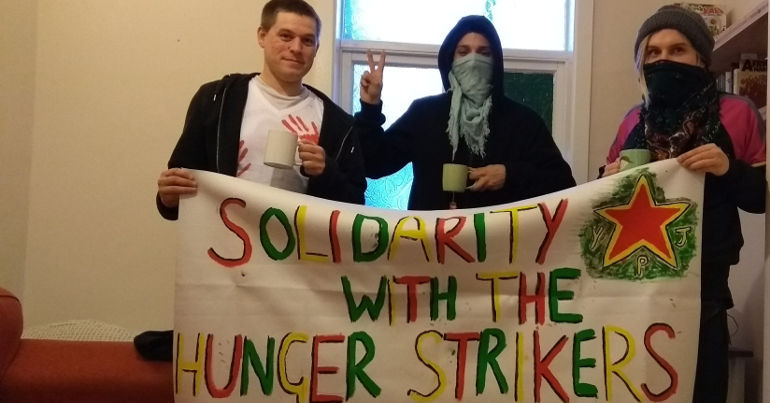 Three UK activists are on a five-day hunger strike. They are taking action in solidarity with thousands of Kurdish hunger strikers around the world, some of whom are nearing death.

The Canary spoke to the activists. Charlie Qereçox, a 33-year-old from Bristol said:

We are on hunger strike, along with thousands of others, who are calling for an end to the isolation of [Kurdish leader] Abdullah Öcalan, so that the peace process in Turkey can be resumed.

Turkey has imprisoned Öcalan for twenty years, keeping him in solitary confinement for most of that time. He has been denied access to lawyers since 2011. In 2018, the Permanent Peoples’ Tribunal (PPT) found Turkish president Recep Tayyip Erdoğan and the Turkish state guilty of war crimes, as well as crimes against humanity for their treatment of Kurdish people.

In Wales, revolutionary Kurdish activist Ilhan Sis (also known as Imam) has been on hunger strike for 140 days and his health is in critical condition. The three activists have been supporting Sis.

I am hunger striking predominantly as an act of solidarity. I have been visiting Imam a lot and have known him since before he started his hunger strike. I’ve got a lot of respect for him. My main goal is to raise more attention because it hasn’t been covered by the media anywhere near enough, and it’s quite abysmal, really.

[Kurdish politician] Leyla Güven prompted this hunger strike and has been without food for 180 days. And we have the Kurdish prisoners inside prison in Turkey who are now on a death strike, so they are refusing all vitamins. We’ve already lost nine comrades on this hunger strike who have died, so I feel like our five day hunger strike is a gesture more than anything else.

J, an activist from Wales, has joined Qereçox and Fleet on the hunger strike. They told The Canary:

I’m doing this to raise awareness for the hunger strikers and their fight for human rights in Turkey and Kurdistan.

In 2017, Qereçox fought in the Kurdish-led People’s Protection Units (YPG) in their fight against Daesh (ISIS/Isil) in Raqqa. They told The Canary about their motivations for volunteering:

I went because I’d been learning about the new society that was being built in North Syria. I was inspired that so much was being achieved in such adverse circumstances, and I wanted to do everything I could to help and to defend that society…A socialist revolution needed me, so I went.

The three friends have the same demands as the thousands of Kurdish hunger strikers: for governments and bodies around the world to put pressure on Turkey to end the isolation of Öcalan. This includes demanding that the European Committee for the Prevention of Torture (CPT), which last visited Öcalan in prison in 2016, take action. The Canary requested a meeting with the CPT but was refused.

“I want peace in Syria, for the people I met there and for the friends I lost,” Qereçox said. They continued:

Featured image via the hunger strikers