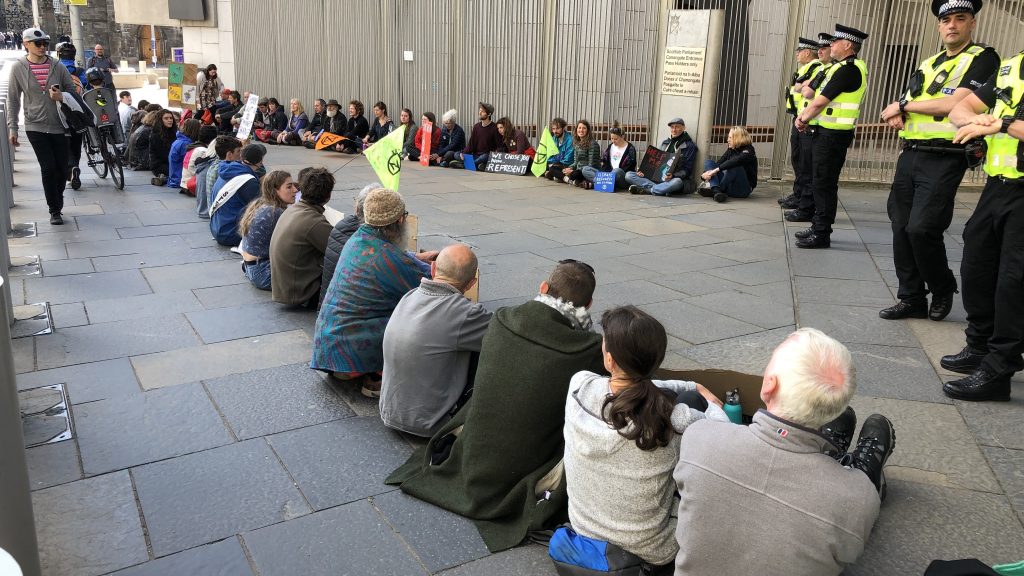 A climate crisis protester has been arrested after a human chain was formed outside the Scottish parliament.

Two protesters glued themselves to the ground, blocking the entrance and exit at Holyrood’s car park. Police said one has been arrested.

Activists demonstrated outside entrances to the Scottish parliament as MSPs debated new legislation on setting targets to tackle climate change.

BREAKING Two rebels glued on blocking the car park entrance to the Scottish Parliament. They are there to ensure that MSPs have to engage with our rebels & hear what we have to say. 11 years left #2045isecocide #HolyroodRebelCamp @ExtinctionR pic.twitter.com/vS188J7ShJ

A total of 13 people were charged after activists blocked a main road in the city for around six hours on Monday by locking themselves together.

“It’s not good enough. We need an emergency response.”

Organisers Extinction Rebellion Scotland criticised MSPs for voting through amendments to the Climate Change Bill to cut greenhouse emissions to net zero by 2045, 20 years past the target campaigners want.

The group’s social media co-ordinator, Lauren McGlynn, said this is “disappointing”, adding: “It doesn’t seem like they are listening to us.”

The 2045 target meets recommendations in a recent Committee for Climate Change report, but McGlynn said:

It’s not good enough. We need an emergency response.

The First Minister has declared a climate emergency and this is not a Climate Bill fit for an emergency.

She also insisted that Scotland as a wealthy nation should be doing more, and parliament could be taking further action.

She said two protesters were arrested after gluing themselves outside parliament in a bid to force MSPs to pass through the human chain, and some of the politicians had engaged with campaigners.

The action comes during a five-day protest outside the Scottish parliament, dubbed the Holyrood Rebel Camp, due to run until Thursday.

Sarah Mercer, an activist from the Isle of Man taking part in the protests, said:

This really is the biggest cultural revolution that we’re going to go through in our living memory and to be honest with you, in most of human existence.