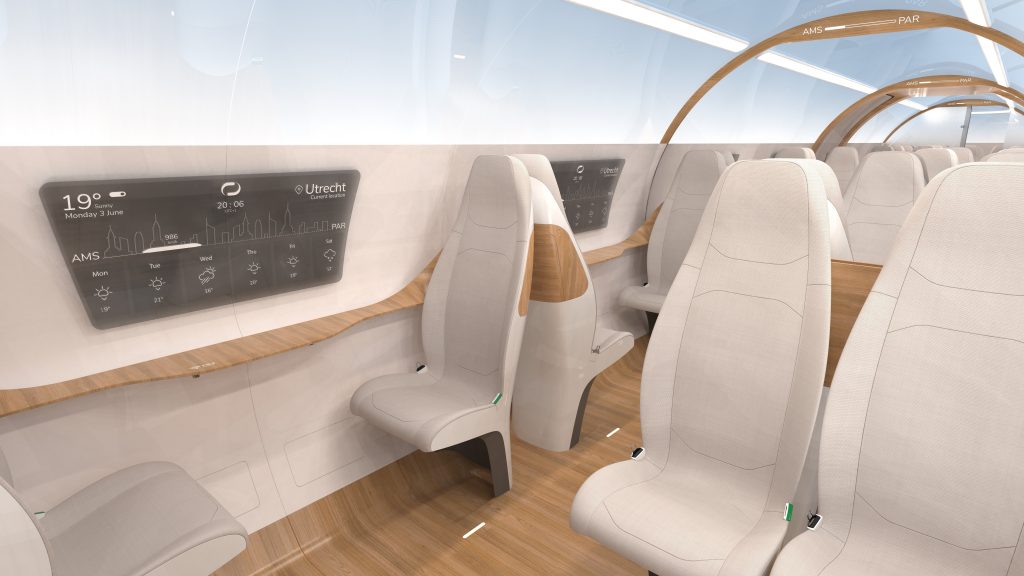 A virtual glimpse into the future of high-speed ground transport has been revealed by a group of engineers and designers, who have envisaged how Elon Musk’s Hyperloop could look.

The immersive virtual reality experience details the exterior and interior design of travel pods, which pass through a station filled with information screens and navigational signage.

As it sets off on its journey, the pod’s curved top half is seen transforming into transparent panels, providing a panoramic view of the outside world.

The virtual model is part of a SpaceX competition entry from Delft University of Technology (TU Delft) in the Netherlands, an initiative to encourage students to come up with innovative prototypes for Hyperloop.

It is the third time a Hyperloop Pod Competition has been run, with 21 groups from around the globe competing to achieve the fastest top speed along SpaceX’s fully enclosed 1.25km test track.

“At Delft Hyperloop we do not just focus on setting a new speed record at the SpaceX competition, but also on the long-term future of the Hyperloop,” said Rieneke van Noort, team captain of concept, known as Delft Hyperloop III.

“A part of this is showing the public what it will be like to travel using this new system.

“Through VR, we want to enable people to experience the Hyperloop in an interactive and immersive way.

“It is great to see people’s enthusiasm when they walk through the Hyperloop station and board one of the pods.”

Although Musk came up with the concept for Hyperloop, he open-sourced the technology to allow other firms to develop the idea.

In his paper written in 2013, Musk described the system as “a cross between Concorde, a rail gun and an air hockey table”.

The theory is that the system will feature a long tube that has had air removed from it to create a vacuum. Then, passive magnetic levitation will be used to create low pressure within the tube and allow the train to float above the track and travel at a speed close to 760mph.