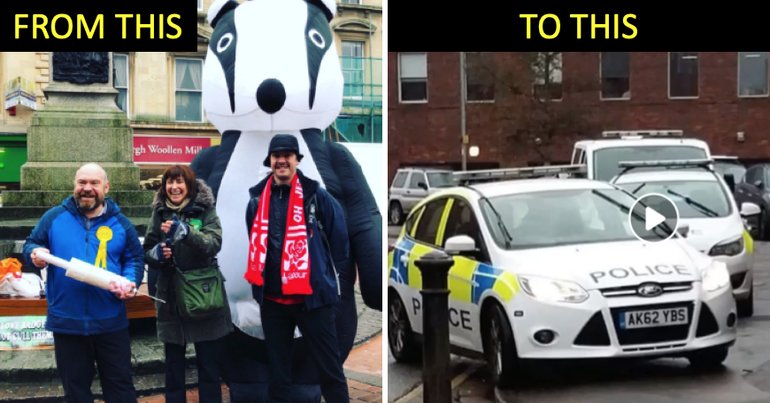 The Somerset Conservatives are in hot water after appearing to overreact to a potential meeting with an inflatable badger.

A local campaign group and their mascot Percy Q’Ted spent the day with several candidates for local MP in efforts to convince them to oppose plans for a badger cull. While Labour and other parties held cordial meetings with the group, however, the Somerset Conservatives called the police.

The West Somerset seat is currently held by Conservative MP Ian Liddell-Grainger. There has been huge opposition to the Tory government’s approach to tackle bovine TB (an infectious disease of cattle) by culling badgers. Environmental groups, charities and activists insist that vaccination programmes are both more ethical and more effective.

Government just announced new badger cull zones & Avon is included for the first time. This is a huge blow given that our badger vaccination programme has just begun, showing a cost-effective, viable alternative to culling these wild animals. Our response https://t.co/NcmE9eLfbl pic.twitter.com/WAdNracNEo

With the cull plans still going ahead, Somerset Against the Badger Cull met with prospective election candidates in Bridgwater on Saturday 23 November. Liddell-Grainger declined to meet the group, but all other parties participated fully.

Thank you to all political parties @SomersetLabour @SWGreenParty & @BillRevans for meeting with @percyqtedbadger in #Bridgwater yesterday, in the rain too! We waited & waited but Ian Liddell-Grainger didn’t show up. @Conservatives pic.twitter.com/2ILRqLiwCQ

As pictures from the day show, the meetings went well. Labour and the Greens promised to end the cull. But when the group went to visit the Somerset Conservatives at their offices nearby, the reception was quite different.

Footage taken by the group shows Conservative agent Jonathan Fraser-Howells confiscating the group’s banners. When the group complained and attempted to retrieve their property, the local party called the police.

In stark contrast & against their own code of conduct, this @Conservatives representative stole our property & called @ASPolice ! We shall be making a formal complaint. pic.twitter.com/llD41Ld6pn

Somerset Against the Badger Cull told The Canary:

The Conservative representative requested full back-up and a riot van and two patrol cars appeared in next to no time. Peaceful protest is accepted in democracies and this person representing the Conservative Party showed a frightening lack of awareness both of the Tory code of conduct and our democratic rights.

The Canary contacted Fraser-Howells to confirm he was the person in the footage, and whether police were called. He confirmed both, stating that:

Mr Liddell-Grainer was not in the building at the time, however, he has offered to meet with the group but they have not taken him up on the offer. The demonstration outside our office was not harmless fun, the behaviour of the group was unacceptable, they do not have the right to put up posters on our private property and intimidate people, they were asked to remove the poster but refused.

Several claims in Fraser-Howell’s statement are unsupported by, or contrary to, other available evidence. The statement does not accord with the footage. The Canary has also seen an email exchange in which Liddell-Grainger declines to meet the group, stating prior campaign commitments elsewhere in the constituency. And when police arrived on scene, they returned the group’s property and made no arrests.

When we put Fraser-Howell’s allegations to Somerset Against the Cull, the group described them as “absolutely shocking lies”. The group told The Canary:

His behaviour was absolutely disproportional to the situation that was happening. We have done many Percy pop-ups in many other locations and have never met with such aggression. Our whole Percy theme is light-hearted, although we wish people passing by to consider the serious, tragic situation that the badger cull has brought to our iconic night-time mammal.

The incident has been an embarrassment for incumbent Liddell-Grainger and the local Conservatives. While representatives of every other party engaged with the group, the Tories first refused to engage and then attempted to have them arrested.

A light-hearted approach to a serious issue was turned into a heated row and a wasted visit from local police. Given the Conservatives have cut more than 20,000 police officer jobs since 2010, we’d encourage local parties to avoid further burdening the service.