Around 9,000 nurses to take strike action in the north of Ireland - Canary 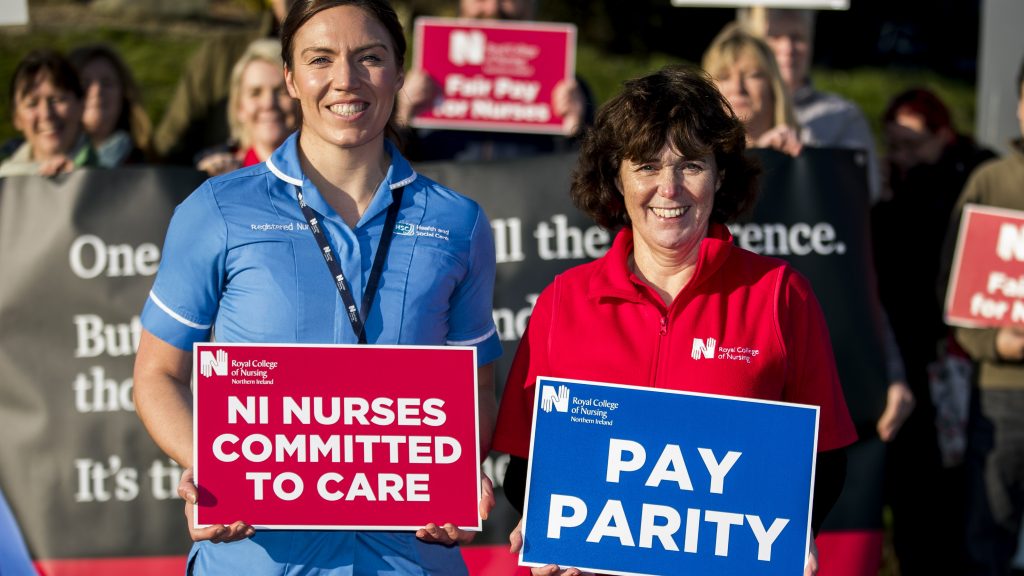 A last-ditch meeting is aiming to prevent around 9,000 nurses from taking the UK’s first 12-hour strike action over pay on Wednesday.

The unprecedented walkout in the north of Ireland will see them leave wards with the solidarity of thousands of other healthcare workers.

Stormont’s political parties are expected to meet the head of the civil service at Stormont in an appeal for more cash.

Unison union regional secretary Patricia McKeown said: “As we enter this significant period in the industrial struggle the consequences lay firmly on the shoulders of the UK government, our elected politicians and the leadership of the civil service.

“The decision they take in the next few hours will have lasting consequences in our society either for good or for ill.”

Routine medical appointments will be cancelled, minor injury units closed and there will be delays to some ambulance responses if the action goes ahead.

Nurses in the north of Ireland are paid up to £4,677 less than counterparts in England and Wales.

Around half are considering leaving the profession because of pressure caused by under-staffing, a union said.

The health authorities are unable to break the deadlock since no ministers are in place to take decisions at the devolved parliament at Stormont.

Spending on temporary agency staff to fill gaps has doubled.

A newly-qualified registered nurse in the north of Ireland earns £1,875 less than in Scotland and £1,419 less than in England and Wales. For a specialist nurse, the difference is up to £4,677, the RCN said.

Northern Ireland secretary Julian Smith has said finding a solution will be among his top priorities during talks he has called with the local political parties.

They face another assembly election if they do not agree by next month to return to powersharing and retake the tiller over increasingly-stretched public services.

Nearly 300,000 people in the north of Ireland were on a waiting list for a first appointment with a consultant, according to Department of Health figures published last summer.

Industrial action is also planned on Wednesday by the Unison, Unite and Nipsa trade unions which cover ambulance paramedics and jobs like cleaning, portering, catering and administration.

All emergency departments will remain open as normal.

The Northern Ireland Ambulance Service will be prioritising 999 calls and those calls which are less serious in nature, potentially, face a delay in response times.