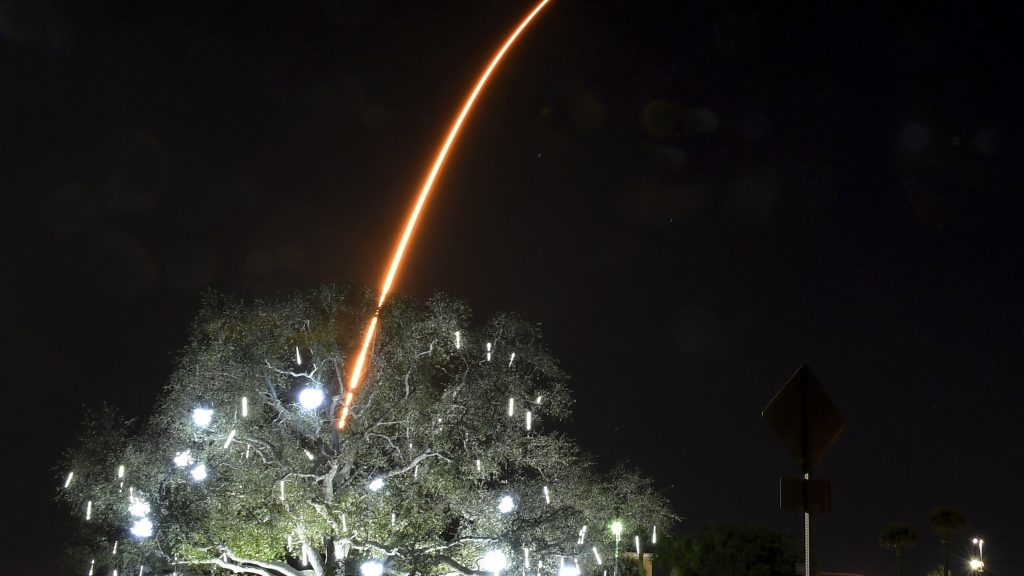 It is a “first step” compromise between SpaceX and astronomers fearful of having dark skies spoiled by hundreds and, eventually, thousands of bright satellites circling overhead.

The Falcon 9 rocket blasted into a cold, clear night sky, recycled by SpaceX for its fourth flight.

As the first-stage booster flew to a vertical landing on an ocean platform, the Starlink satellites continued hurtling towards orbit to join 120 similar spacecraft launched last year.

An hour later, all 60 satellites were free of their upper stage and making their own way in orbit.

After the first Starlink batch of 60 was launched in May and the second in November, astronomers complained that the bright satellite chain was hampering their observations.

In response, SpaceX came up with a darkening treatment to lessen reflectiveness.

The coating is being tested on one of the newly launched satellites.

Jeff Hall, director of the Lowell Observatory in Flagstaff, Arizona, said the Starlinks have been just an occasional problem so far but noted the risk to stargazing will grow as the constellation expands and other companies launch their own fleets.

He heads the American Astronomical Society’s committee on light pollution, space debris and radio interference, and is working with SpaceX on the issue.

The matter is on the agenda at the society’s conference in Hawaii this week.

“Anything that darkens the satellites is a step in the right direction,” Hall said.

He said it is too soon to know whether the dark coating will work, “but it definitely is just a first step and not enough to mitigate the issues astronomy will experience with the Starlinks”.

The Starlinks are initially placed in a relatively low orbit of 180 miles (290km), easily visible as a long, strung-out cluster parading through the night sky.

Over a few months, krypton-powered thrusters raise the satellites to a 340-mile (550km) orbit.

The higher the orbit, the less visible the satellites are from the ground, according to SpaceX.

Even so, SpaceX said it is supplying astronomy groups with the satellite co-ordinates in advance, so they can avoid the bright flyover times.

Already established in launching satellites for others and making space station deliveries for Nasa, SpaceX is among several companies looking to provide high-speed, reliable internet service around the world, especially in places where it is hard to get or too expensive.

Others include Jeff Bezos’s Amazon and OneWeb.

SpaceX may start service later this year in the northern US and Canada, then expand to the world’s most populated areas after 24 launches.