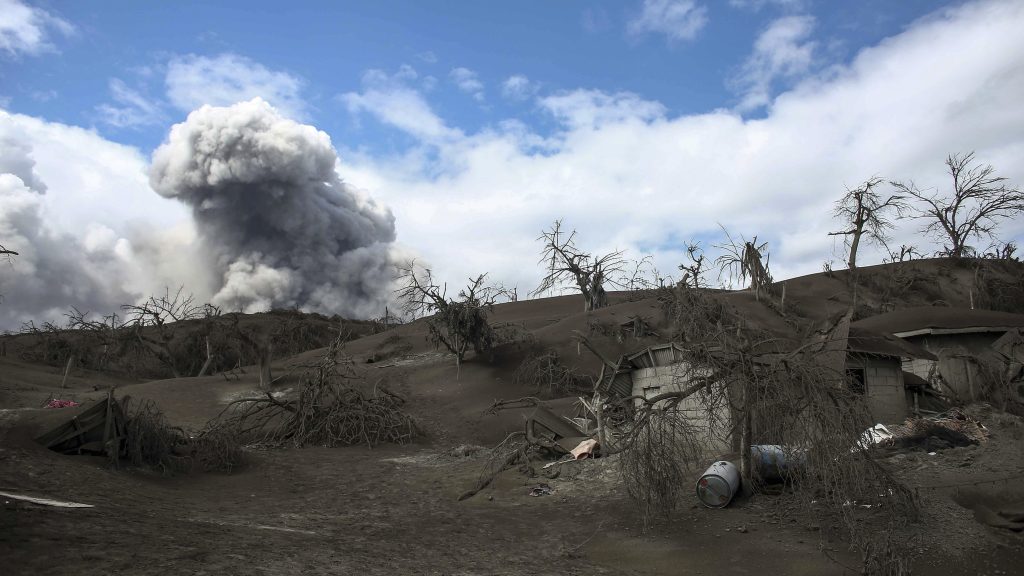 A volcano in the Philippines has sent more plumes of ash into the air and shuddered continuously with earthquakes that opened cracks in roads as police blockaded at-risk towns due to fears of a bigger eruption.

A crater lake and nearby river have dried up in signs of the Taal volcano’s continuing restiveness.

Soldiers and police have blocked villagers from sneaking back by boats to the volcanic island and nearby towns to retrieve belongings and cattle.

Many houses and farms have been damaged by volcanic ash since the eruption started on 12 January, though no deaths or major injuries have been reported after tens of thousands of people were evacuated.

The volcano in Batangas province lies more than 40 miles south of the capital, Manila.

Amid warnings of an imminent and more dangerous eruption, police cordoned off at least four towns along or near the coast of a lake surrounding the island, sparking arguments with villagers.

“We’ve lost everything, our house got damaged, but I need to retrieve my pots and cooking wares and other things. They should not be very, very strict,” said 59-year-old Erlinda Landicho.

Landicho, who fled with her son as the volcano erupted, was among a throng of villagers stopped by police from re-entering the ash-blanketed town.

A fire engine blocked a key access road and police set up checkpoints. Beyond the barricade, the area looked like a ghost town partly shrouded in swirling ash.

More than 121,000 people have fled their homes just in Batangas province.

Among those displaced were about 5,000 people who live on the island where the Taal volcano lies.

The island had been a popular tourist destination for its stunning view of the volcano’s crater lake and lush hills teeming with trees and birds. Some villagers have slipped past checkpoints to retrieve some of the hundreds of cows and horses they left behind, prompting the coastguard and police to intensify a security cordon.

A villager who returned from the island described how the island now resembles an ash-blanketed wasteland.

About four villages exist on the island despite it being a permanent danger zone.

The 1,020-foot Taal is one of the world’s smallest volcanoes but also one of the most restive of 24 active volcanoes across the Philippines.

The Southeast Asian archipelago of more than 100 million people is in the so-called Pacific Ring of Fire, the string of faults around the ocean basin where most of the world’s earthquakes and volcanic eruptions occur.