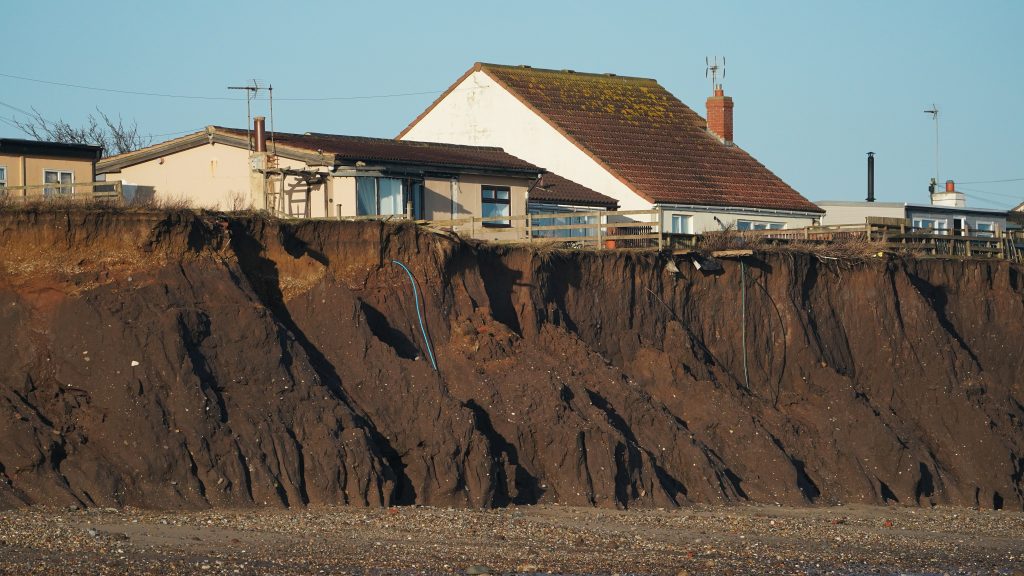 Councillors in Yorkshire are to discuss the “devastating” effect of erosion that will see dozens of people lose their homes to the sea on the fastest disappearing coastline in north west Europe.

Members of East Riding of Yorkshire Council are to meet in Beverley after a report found 24 homes are at risk on the coast, which has seen losses of up to 10 metres since March.

They are calling on the government to provide funding for affected residents – who face paying thousands of pounds to demolish their own homes and relocate.

Monitoring of the soft clay cliffs on the 80km Holderness Coast has found that the coastline is eroding at a rate of between 0.5m and 4m each year.

But a recent council report, which will be discussed at the environment and regeneration overview and scrutiny sub-committee meeting, revealed that some areas recorded losses in six months that were nearly double the annual rate, with the area south of Withernsea losing land at a rate of more than one metre each month.

The report predicts that this erosion, which is likely to increase in future due to climate breakdown, will put 24 homes in Skipsea at risk by 2025.

Government decisions have been to not defend much of the sparsely populated coastline, with coastal defences not economically, socially or environmentally sustainable for large stretches of the coast.

Councillor David Elvidge, who will chair Wednesday’s meeting, said: “With the amount of funding available, we can only really defend the large areas of population. It’s a devastating thing.”

Residents are also left facing a bill of thousands of pounds to demolish their homes and, while the council has historically met these costs, it cannot afford to fund the demolition of all 24 properties at risk.

As a result, councillor Jane Evison is now calling on the government to provide funding to help cover these costs, which she said can be as much as £20,000.

She said: “The council is in a position where they’re not allowed to defend a coastline and neither are the private householders, clearly there’s erosion taking place, one or two homes are at very high risk, yet there’s no funding.”

Evison added: “I’ve asked for a letter to go to Defra [Department for Environment, Food and Rural Affairs] to say, ‘Look, as we’re not allowed to take action regards defending anything, we need funds available to keep people safe to help them with the costs of demolition and keep that coastline safe for people’.

“I don’t think it’s a fair situation when we’re not allowed to provide any protection but we’re picking up the bill to keep people safe.”

Elvidge said: “To lose your home and then the financial cost on top must be traumatic to say the least. If the government could stump up the cash, that would be fantastic.”

He said people in unprotected places such as Skipsea are “appalled” when they see coastal defence schemes being planned for other areas.

A £5.5m scheme, which has received £3m of funding from the European Regional Development Fund, is due to start in Withernsea this year.

He said: “It shouldn’t have to happen like that but unfortunately that’s where we are.”

The councillor said he hoped residents might be reassured after the meeting on Wednesday.

He said: “I want them to take away a reassurance that we’re doing everything we can to protect our coastline where we can and, where we can’t, we’re helping our residents every way we can.”