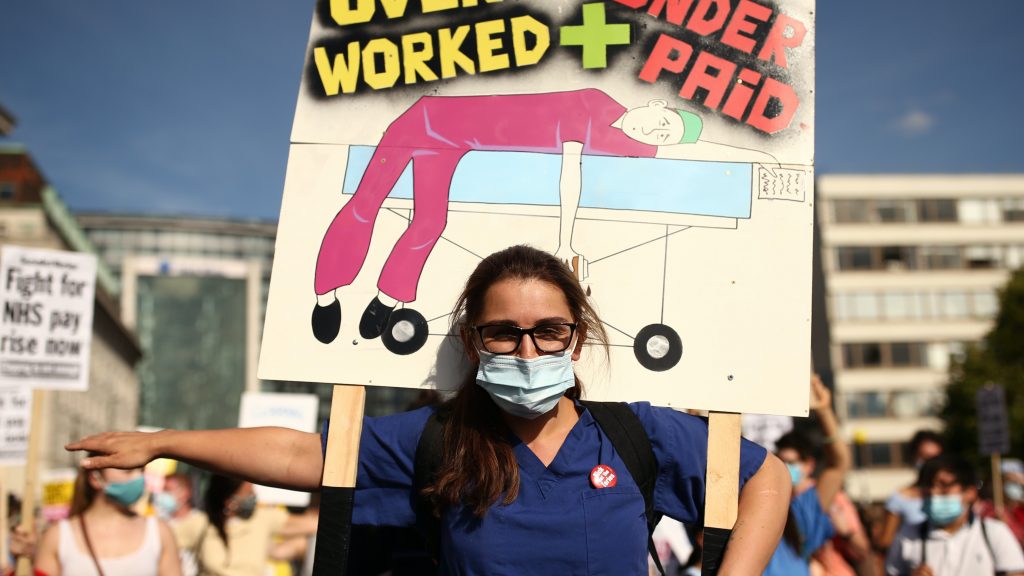 A nurse has said she would invite Boris Johnson to join her on a shift if there was a second wave of coronavirus, as hundreds of NHS workers marched to Downing Street demanding an immediate pay rise.

NHS staff made their way to Whitehall on 29 July, carrying banners that said “Clapping won’t pay my bills” and “We helped you survive, now help us survive”.

Health workers are in the final year of a three-year deal and are due a pay rise next April, but unions want the government to show its appreciation for NHS staff by bringing it forward to this year.

The government did not commit to an early pay rise for all NHS staff last week when wage increases for 900,000 public sector workers were announced.

The Unite union’s branch at Guy’s and St Thomas’ Hospital partnered with Keep Our NHS Public and Nurses United to hold the march to protest against the government’s decision to put off the pay rise for NHS staff until April 2021.

Rebecca Reid, a 27-year-old London-based nurse from Prestwick in Scotland, said there is “desperation and anger” among NHS staff as she accused Johnson of having “blood on his hands”.

She said she would extend an invite to the prime minister to join her on a shift in the event of a second spike of Covid-19, but she did not think he would accept, adding: “I think he’s a coward.”

Speaking to the PA news agency outside Downing Street, she said: “We worked through an unprecedented pandemic. There are things I’m never going to forget about.

“I think the general feeling is anger. We’re angry. We’ve been let down by our government.

“As a profession, we looked after the prime minister himself. He’s seen how brilliant we can be. And this is the reward we get.

Reid said nurses have had to turn to food banks, adding: “We’re getting called heroes. But I don’t see Batman going to a food bank. Heroes still have to pay the bills.

Reid said it feels like Johnson is paying nurses “lip service” and “not putting his money where his mouth is”.

She said she appreciated the general public’s support in the Clap for Carers initiative on Thursday evenings during lockdown.

“But having someone clap in government who is saying one thing and doing another, it really upsets me,” Reid said, adding: “He doesn’t deserve to be clapping. He’s got blood on his hands.”

She said she was referring to issues surrounding personal protective equipment, with nurses making their own PPE and “putting their lives at risk”.

Reid added: “Our government had a chance to fix that and plan for that. They didn’t.

“He’s got blood on his hands. We lost so many nurses.”

Becoming emotional, Reid added: “I would invite him to come and join me on a shift in the second wave. Because it’s coming. Just because the pubs are open doesn’t mean the pandemic’s gone anywhere.”

Asked what she thinks Johnson would make of a shift alongside her, she said: “He wouldn’t know what to do with himself.

Another nurse, who asked to be referred to only as Sarah, was holding a banner which said “Unlike Lady Gaga we don’t live for the applause Boris”, in a reference to one of the pop star’s hits.

Asked what she would say to Johnson if she had the chance, Sarah told PA she would tell him he has “severely let us down”, adding: “Morale still needs to be kept up and he’s kicked us in the teeth by leaving us out of this pay rise, all NHS workers, the cleaners, the porters, the nurses.”

Sarah pointed out that the NHS saved Johnson’s life, adding: “His actions speak louder than his words right now by leaving us out.”

The march came as a survey by Unison suggested more than two-thirds (69%) of people think all NHS employees should be awarded a rise this year.

The union’s poll of more than 2,000 British adults found that two-thirds believed a wage increase should be significant, in light of the Covid-19 pandemic.

The survey found that just one in 10 thinks health workers should wait until April for a rise.