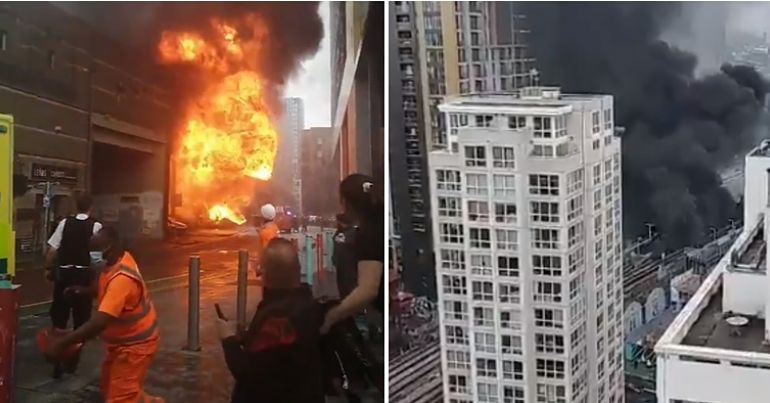 A large fire has broken out under a major rail line. London Fire Brigade (LFB) said the blaze is believed have started at some garages close to Elephant and Castle railway station.

The incident was first reported at 1.43pm on Monday. Ten fire engines and 70 firefighters are at the scene.

A video posted on social media showed a small explosion appear to erupt from inside the station.

Three commercial units underneath the railway arches are completely alight and four cars and a telephone box are also alight near #ElephantandCastle Railway Station. Road closures are in place and people are advised to avoid the area and keep windows and doors closed pic.twitter.com/yALJKnVd8d

There is a huge plume of smoke billowing above the area.

The fire has caused disruption to Thameslink and Southeastern services.

There are now 15 fire engines and around 100 firefighters tackling the fire in #ElephantandCastle. Our 999 Control Officers have taken 44 calls to the blaze pic.twitter.com/AwZBnv2T6M

Sara Scarpa, 25, lives in nearby apartment building Hurlock Heights and said smoke and the noise of the explosion had reached her window. She said:

We opened the window for a sec as you could hear people shouting, and we smelt something very very strong.

The smoke (was) dying down a little… we heard an explosion and now it started again.

Some posted messages offering help to those affected:

Some important information that could help if you've been affected by the fire at Elephant and Castle Railway Stationhttps://t.co/oJ9Kf3UzQa#elephantandcastle