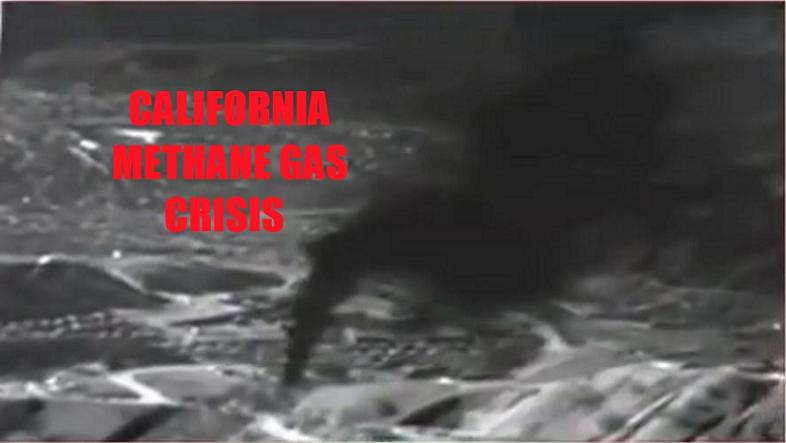 A gigantic methane leak in southern California has unloaded over 150 million pounds of greenhouse gases into the atmosphere over the last three months, and continues unabated.

The leak is so severe that more than 2,000 homes in the vicinity have had to be evacuated, and approximately 110,000 tons of methane gas have been released into the air every hour since around the middle of October. This accounts for about a quarter of California’s current methane emissions, which, given the state’s 37 million population, is a startling proportion. It is one of the biggest environmental disasters ever caused by Man.

The leak, which was discovered on 23 October 2015, is coming from a storage field in a mountain in the Aliso Canyon, to the north of Los Angeles. The field belongs to the South California Gas Company (SoCalGas), and is the largest underground methane storage facility in the western United States.

The leak was confirmed when the Environmental Defence Fund (EDF) scanned the Aliso Canyon with infrared cameras. The alarming footage recorded has been published and can be seen here:

Suspicions of a leak were first aroused when inhabitants of the nearby settlement of Porter Ranch began reporting in large numbers that they were suffering from dizzy spells and nosebleeds, amid widespread complaints about unpleasant fumes (although methane is odourless in its natural form, the chemicals tertbutyl mercaptan and tetrahydrothiophene are added to it to give it a sulfur-like smell to help people notice possible leaks).

The aforementioned dizzying effects are common symptoms of the asphyxia induced by shortage of oxygen when it is displaced by methane. It can also cause nausea, vomiting and severe headaches. Of course, methane is highly flammable too, meaning it presents a serious fire hazard in its current concentrations in the Porter Ranch area; normal background methane in the air is approximately 2 parts per million (ppm), whereas over the last few months, the levels in Porter Ranch have reached as high as 230 ppm. More than 2,000 families therefore have had to be evacuated from the area, and are likely to be waiting a long time yet before they can return home. Several schools in the district have been forced to close.

SoCalGas’ current estimate is that it will take about two more months to plug the leak, and despite several previous attempts to get the emissions under control, there has been no apparent let-up in the rate of escape, which the EDF asserts is having an environmental pollution effect equivalent to all the refineries in California combined. The difficulty appears to be that the storage well’s casing has taken damage in some way, at around 500 feet below ground. This makes it a very difficult task for the engineers just to get near enough to it to attempt repairs, especially with the escaping gas presenting a direct hazard to their own well-being. It has emerged recently that the well is missing a subsurface safety valve that might have prevented the fumes from reaching Porter Ranch; the valve, according to lawyers representing the town’s residents, was never replaced after removal in 1979.

This is all calamitous in the short term, but there is a longer-term worry when dealing with such astonishing amounts of methane leaking into the air. Methane is a greenhouse gas, and moreover, it is a very powerful one; it is about 20 to 30 times more heat-absorbent than carbon dioxide (CO2). On the plus side, it does naturally disperse within a few years by reacting with hydroxyl radicals in the troposphere, but unfortunately, one of the by-products of this reaction is more CO2, so its warming effects do not stop there.

Such an enormous amount of methane escaping the Aliso Canyon storage field every day therefore could provide a minor but unwelcome boost to global warming. In real terms it will only be a tiny boost, as on a global scale the amounts involved are very small indeed. But as recent climate ‘eccentricity‘ has demonstrated very keenly, we are already at a point where we need to reverse greenhouse gas effects, not provide boosts to them, no matter how small. As the warming process works in part as a ‘positive feedback loop‘, any boosts to it will have later amplifying consequences. (For example, warming causes ice to melt, and the less ice there is, the less sunlight is reflected away from the planet’s surface and back into space, causing the atmosphere to become even warmer, causing more ice to melt etc.)

While Aliso Canyon is clearly the worst methane leak in the Los Angeles area, it is by no means the only one; as the EDF have discovered, there is a leak every four miles in Pasadena, and a leak every five miles in Inglewood and Chino. Bad maintenance, including the use of pipes that are often over fifty years old, appears to be the main reason, and while each of these leaks individually is likely to have a negligible greenhouse effect, taken together, they could mean more trouble.

It should be a matter of astonishment – but it is not – that the mainstream media, both in the US and in Europe, pay the ongoing environmental disaster in southern California little attention. Whether it is simply because the news outlets think that climate change is ‘too-1980’s-to-be-a-sexy-story-anymore’, or they have more sinister, oil-industry-friendly reasons, Aliso Canyon gets small-print headlines only. The Guardian, to its modest credit, has at least done a couple of articles about it (one of them after New Year 2016), but the leak should have been frequent front page news since October – enough at least to make sure most people are aware of it. Instead, most of the coverage seems to be coming from private blogs and environmental websites that just do not have anything like the same reach. This disaster is a serious threat to human health, and a pollution threat on a grand scale, even before we take its climate-damaging potential into account. There is also a need to investigate whether corporate negligence on the part of SoCalGas played any part in the disaster – bearing in mind the role of private sector companies in previous environmental catastrophes.

But then, maybe that is why the mainstream media are giving it such quiet coverage.

If you wish to keep tabs on developments at Aliso Canyon, or tooffer support to the victims of Porter Ranch, here are a few ways you can do so.

– You can keep track of the latest information from the California Air Resources Board.

– You can make a donation to Save Porter Ranch, which is a local environmentalist group.

– You can join the official Porter Ranch Gas Leak discussion group on Facebook.