Is this breakthrough too controversial to solve the transplant crisis? - The Canary 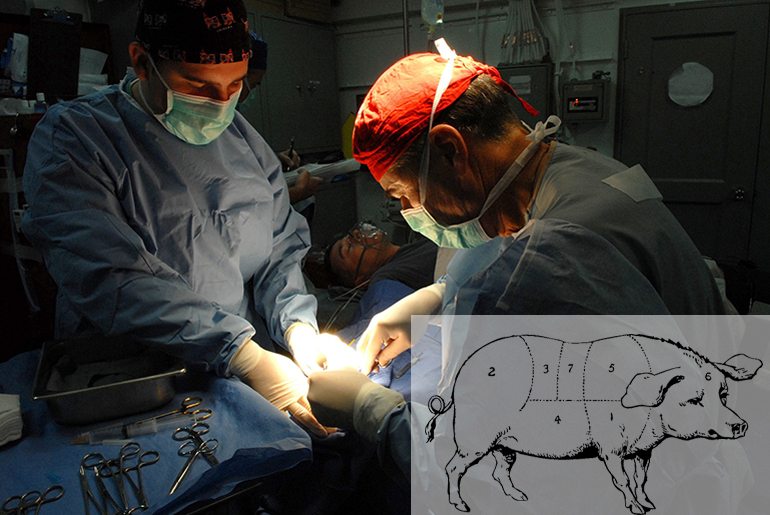 *CONTENT WARNING  – discussion of use of animals in research*

Scientists hope that animal parts could one day provide infinite sources of organs. This could have huge implications for human health, but just because we can do something, it doesn’t mean we should.

In the US, another name gets added to the national organ transplant waiting list every 10 minutes, and an average of 22 people die every day from the lack of available organs for transplant.

A short history of cross-species transplantation

Cross-species transplantation, also known as xenotransplantation, dates way back to the 17th century, when blood was transfused from animals to humans with various illnesses.

In the 19th century, animal skin grafts were a “thing”, with frogs being the animal of choice.

Possibly the most bizarre slice of xenotransplantation history happened in the 1920’s, when pieces of chimpanzee testis were transferred to ageing men to improve their “zest for life” – a real-life “Planet of the Apes” moment for sure…

Primate organ transplantation really caught on in the 1960’s, following Alexis Carrel’s pioneering surgical work. This was at a time when human organs were not available, nor dialysis in use. Kidneys were transplanted first – some patients lived up to nine months.

But the first ever animal-to-human heart transplant was performed by James Hardy in 1964. The patient died within two hours, but his revolutionary work set the stage for animal-human xenotransplantation.

Pig hearts could be a good option for human transplantation. They are roughly the same size as a human heart and have similar plumbing (which makes hooking them up a breeze).Couple this with the fact that pig litters tend to be large and pigs reproduce quickly, and you have an almost infinite number of potential donors.

In fact, valve tissue from pig (and cow) hearts is already used in human transplantation, but it doesn’t have the same rejection issues as the whole organ would.

Pig heart rejection will always be an issue. The organ is covered in a type of sugar that triggers acute rejection in humans. Our antibodies attach themselves to these sugar molecules and destroy the newly transplanted organ.

Other problems also exist, such as blood clotting in the host – another common immune response in xenotransplantation.

To overcome the problems, genetically engineered pig hearts have been in development since the late 1990’s; not long after Dolly the sheep was successfully cloned.

Since this time, various groups have attempted to engineer pig hearts that won’t be rejected by humans. In fact, pig heart genetic engineering technology was not developed to mass-produce organs for transplant, but instead to refashion the current process to reduce risk of transplant rejection by the human body.

But they could also help solve the donor shortage.

To overcome some of the issues associated with pig heart transplantation, scientists have now genetically engineered hearts from pigs to contain the human thrombomodulin gene, in pigs that also lack the sugar-producing gene.

Thrombomodulin helps with the blood clotting problem, and the immune reaction is lessened by the absence of the pigs’ sugar molecules.

The engineered pig hearts were transplanted into baboons. The baboons were not given a heart transplant per se, but rather the pig hearts were grafted into the baboons’ abdomens. This tested whether the hearts would survive inside a different species, with the potential for immune rejection.

By also using a new combination of drugs to help prevent rejection, the pig hearts have now survived in baboons for a record-breaking two years, as shown in a study published last week in Nature Communications.

Previously, the longest survival for pig heart transplants was 236 days, so this new study is quite the achievement for the team from the National Heart, Lung and Blood Institute (NHLBI).

As the team say,

Preventing xenograft rejection is one of the greatest challenges of transplantation medicine.

Solving the xenotransplantation issues could have huge implications for human health, and help to solve organ donor shortages.

The next step for the team will be to see if the hearts can truly be used to keep the baboons alive.

Ethics and other worries

Although groundbreaking, the research is controversial for many reasons.

The ethics of using pig hearts, and the ethics of performing primate research will always raise thousands of questions. Many people oppose harvesting animal organs for human use, and using animals in scientific research.

Some religious groups oppose it, too, since the consumption of pig products poses problems in some Jewish and Islamic communities, for example.

Viral and bacterial infections are also a valid concern. Could the transfer of pig microorganisms to a recipient then pass into the general population? To prevent the transfer of disease, pigs would have to be kept under strict barrier conditions and screened regularly.

In the US, the Food and Drug Administration have stated that if a xenotransplantation is ever to take place, the recipient must undergo monitoring the rest of their lifetime and waive their right to withdraw. But is taking away someone’s right to refuse screening truly ethical?

Although using pigs as organ donors is a long way from being realised, this pioneering research could have a major impact in the world of organ donation and one day save thousands of lives. However, the ethics of xenotransplantation will always be an issue.

What are your views? If you were on a long waiting list for a heart transplant, would you consider a pig’s heart if it were a viable option? We’d love to know what you think.

In the UK, join the NHS Organ Donor Register

In the US, sign up here to be an organ donor